DAY IN, DAY OUT ON SOI AREE 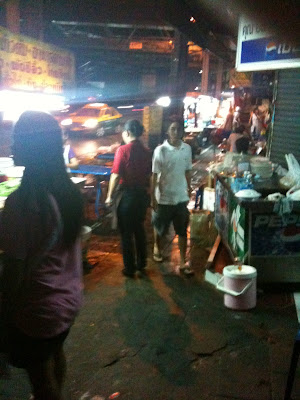 (first published in the Kyoto Journal, 2001)

Deep in the heart of Bangkok, a soi runs through a ramshackle neighborhood of cluttered shops, rain-stained condominiums and shiny office towers. Its just an ordinary street, caught in the throes of change, straddling centuries, looking back as much as forward.

The untidy, thickly settled street is far from picturesque, but its throbbing with life, a virtual floating market supported by an invisible river of perpetual motion. Bangkok long ago abandoned its curving riverways and tree-lined canals for straight arrow corridors of asphalt and concrete, embracing fuming cars and busses with the adoration once reserved for the water buffalo and the elephant. Nonetheless, the vitality of an older way of life is preserved in pockets here and there.

The street where I live is many streets in one, an open-air market at dawn, a restaurant alley at noon, a quiet rendezvous spot at night, subject to monthly spikes of economic activity revolving around payday and lottery day.

Old time taxi drivers call it Iron Bridge Lane for reasons less apparent now than before, but thats as good a name as any. There's no river but its a bridge to Bangkok's past, its thriving banks splashed by the diurnal waves of traffic, the steady ebb and flow of the human tide.

Due to the thick concentration of street vendors, the usable width of sidewalk is as narrow as a plank, and a single misstep full of peril, a vestigial reminder of riverine life. To get from one end of the street to the other is like cutting through a long and attenuated communal home: you pass through kitchen, dining room, living room, toilet, and garbage heap over and over again. The sidewalk is spiked with randomly placed telephone poles, traffic signs, broken-down phone booths, fire hydrants, portable signs and laundry racks, not to mention an ever-shifting maze created by sidewalk vendors with their boiling vats of oil, bubbling curries, and red-hot charcoal grills all at knee level and the obstacle course of broken pavement, gaping potholes, unattended open manholes, construction pits, puddles of unknown depth and unpredictable attacks of hot, smoking, screaming motorized vehicles that treat pedestrians with the contempt aimed at easy targets in a video game. A fleet of a dozen tuk-tuks and twenty motorcycle taxis rocket up and down the soi from one end to another, linking a busy traffic artery to a complex of government office buildings.

When the sun reaches its zenith in the sky, most sentient creatures seek the shade except for mad dogs, Englishmen and Thai office ladies. Hundreds of hungry workers descend upon the street from nearby air-conditioned towers for a lunchtime feeding and shopping frenzy. Appropriate measures have been taken in advance; the jok rice porridge shop, a stalwart with low-budget local diners till mid-morning, is hastily converted into a clothing shop to exploit the temporary bulge in the female population, only to be re-converted to a porridge shop (with sheets draped over its racks of womens wear) later on in the afternoon. The used book rental shop on the corner by the tuk-tuk queue doubles as a cake and cookie place at noon, then serves takeout fish, rice and vegetables for women are their way home in the evening.

The college-educated salaried women are instantly identifiable, not only by their company tags, smart threads and well-tended hair, but by climate-inappropriate sweaters and blazers worn at work in office towers chilled to arctic perfection.  The lunchtime flood of well-heeled women going from 21st century computer workstations to 19th century food stalls keeps up until every last seat in every last mouth-watering noodle shop and tantalizing curry stand is occupied, until the narrow alleys are impassable and local shopping arcade is redolent of perfume and shampoo.

Then, as quick as they came, they vanish like Cinderellas in fear of the office clock, beating their retreat in sputtering tuk-tuks and riding pony on the back of bleating motorcycles until the crowd thins and the male-female ratio evens out again. The shops and stalls assume a torrid tropical stillness, pushcarts pulling under precious spots of shade. The air-conditioned beauty parlor provides a refuge for the fruit vendor, whose crates of bananas, pineapples, rambutan, and oranges stretch from deep inside the shop to the sidewalk and the street, where other vendors adopt restful siesta poses. As the day wears on, the right bank of the street will fall into the shade.

Just when it has quieted down, there's a stir of unexpected activity in front of an idle construction site. Its the good-natured local idiot, pacing back and forth in his regular spot with unusual consternation. The rest of the world understands that the old-fashioned grocery shop had to be destroyed in the name of progress, but he's a little slow. The rock of his world has turned to dust, the predictable contours of his existence turned upside down and inside out, and he peers at the rubble that once was his home, a tear wandering down the stubble on his sunburned cheek.

The tiny dry goods store run by his white-haired mother is gone forever, but not for good. Her business has been reincarnated on a wobbly table in a spot of shade on the sidewalk, from which she hawks bags of rice, cooking oil, peanuts, bottled water and cigarettes, one at a time, for old-timers short of change.  The four walls have disappeared, but the essence of the corner grocer remains, offering a sense of continuity in the face of hard changes.

The flow of time and the ravaging of the elements takes a heavy toll on things, but ideas are not so easily destroyed.  Its a reminder that a store isnt a building, its an activity, and a neighborhood is not a collection of buildings, but a social net created by people who live there. Every frayed mat and wobbly table on the soi is a link to the centuries-old tradition of periodic markets that once flourished along canals and village lanes, a way of life that continues to reinvent itself, even in the shadow of shopping malls. For those living on society's margin on a frugal budget, the old way of doing things is preserved, not so much out of nostalgia, but because its the only way they can afford.

Shopping malls packed with chain stores serve many functions but alleviating poverty is not one of them; the gap between rich and poor is growing. The more concrete is poured, the more Bangkok appears to be sinking back into the mud.  It's life on the edge of a swamp as always.

The village idiot is sitting on the sidewalk now, getting ready for his afternoon nap. He leans back against a shaded stretch of wall, hands tucked inside his red shirt, and closes his weary eyes. What changes the last year has seen.
The dance hall next door has been turned into a pet shop, the flower shop across the street is now a cafe. The open air restaurant has changed hands three times, going from no-frills food-court to pretentious seafood joint to a country-style eatery, its leaky fish tanks now planters for potted flowers.

The gracefully aging photo shop, its studio full of ancient props, braces itself for the digital age, while the cobwebbed steak-and-Thai food eatery next door now hawks mobile phones to attract the eyes of the commuting crowd. A family-run coffee shop has changed hands from one sister to another, marked by a complete makeover  its lived in living room look yielding to an austere yuppie decor  though the brew remains the same.

The fancy video rental store went out of business with scant warning, sheepishly giving away its stock to customers saddled with useless life-time membership cards. That's probably good news to the local curbside pirate video vendor, though his business hours are uncertain as he needs to stay a step ahead of the police.

Two restaurants that appear to be unrelated, occupying two sides of an intersection are, on closer examination, linked like Siamese twins at the kitchen, one with moderate family fare, the other astronomically expensive and usually empty, a sharks fin joint for local show-offs.

The local no-star hotel remains an anchor of the neighborhood as it has been for decades, its prices low at the cost of shabbiness. The dimly-lit coffee shop, ancient air-cons dripping sweat, is a place of languid intrigue as chain-smoking politicos and cops stretch their legs to sit out the heat of the day.

Abandoned, half-empty luxury towers languish, while low-rise, low-rent housing is full of bustle. An unfinished condo, inhabited by squatters until they got too comfortable, has been fenced off, forcing motorcycle drivers to set up a new hangout under a curbside tree. There a gregarious shoe repair man holds court under the shade of the leafy banyan, entertaining the boys with juicy stories while they sip pushcart hot and iced coffee from shot glasses and plastic bags.

Burmese migrant workers, fresh off local construction sites, drink a short distance away the only place on the street they can afford is the street itself. Beggars and blind musicians collect change, while the scent of baking bread wafting from a sidewalk oven battles with bus exhaust.

Tough times mean tough hours.  The itinerant sweet roti vendor is the endurance champ, up before dawn to pedal his portable coal stove grill to the first of several strategic spots, flipping till midnight his pancakes packed with sweetened condensed milk and bananas before making the return trip home.
At a time when other streets come alive, selling souvenirs, sex, mementos and memories, the denizens of Iron Bridge Lane batten down the hatches, pulling shutters closed and padlocking the gates. The soi gets quiet but it never sleeps. A handful of after-hours places stay open, their dangling bare electric bulbs making small islands of light on the blackened street. A lushly landscaped backyard patrolled by ducks, dogs, chickens and rabbits doubles as a toney restaurant and drinking place, while farther down the lane, a residential-style home opens its doors for sexual massage.

Flimsy tables crowd the curbside in front of the shuttered optical shop, where rubber boot-clad cooks step up and down the curb to reach tubs of boiled chicken, vats of fat-soaked rice, and a giant cauldron of broth laced with parsley.