MARTIAL LAW AND THE MEDIA 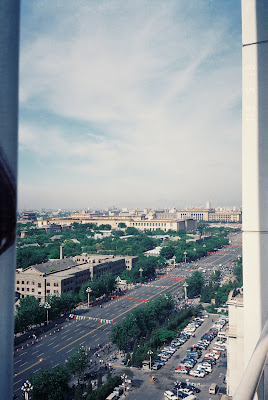 The view from room 1413 in the Beijing Hotel.

From my balcony I could see the helicopters as they banked and began to hover and circle over the Square like a pack of metallic dragonflies. What was the purpose of that? Were they filming? Was Tiananmen under attack? Was this it? The time said 9:30. I called the BBC office, but they hadn’t heard anything about any helicopters. I called Melinda Liu at Newsweek and got the same response. What helicopters?

I was aching to know what was going on at the square. Was the movement falling apart with dispiriting fear or digging in with last-stand defiance. What if students packed up and marched home? What, if anything, would take the central place occupied so long by the hunger strikers? What was the new focal point?
As we spoke, a raspy, automotive roar echoed and reverberated in the street below.
“Look, the Flying Tigers!”  Bright called out excitedly. “Here they come again, let’s count how many this time!” She got carried away with childish enthusiasm as the “Flying Tigers” motorcycle brigade roared by. Bright explained that the “fei hu” circled the old city clockwise by racing along Second Ring Road, much like the path of the bicycle demonstration. They cruised by the hotel and then throttled their way to the square, an obligatory and welcome detour on the southern link of their journey, a sign to all that all was well.
Motorcycle convoys, being bossy, noisy and associated with gangs, according to my Long Island sensitivities, were not things to be admired—they conjured up images of Hell’s Angels and traffic accidents. But in this besieged context, the revving and roaring, even the trail of exhaust of the hot engines, was life-affirming and reassuring.
The motorcyclists provided up-to-the-minute information about developments around the city, with a focus on military moves and policing. It was a dramatic innovation in the ever-evolving media tug of war, filling the information vacuum created by official propaganda. The sputtering bikes were the protesters’ early warning system in case of attack, the vanguard should a crackdown be set into motion. They tirelessly patrolled the outside perimeter of people-controlled Beijing.
“Sixty seven, sixty eight, sixty nine . . .” Bright counted out loud like a schoolgirl. “I counted sixty nine, how many did you count?”
Although I wasn’t counting, I shared the visceral joy in watching the Flying Tigers roar by in formation. They circled Beijing as sentinels, on the lookout for trouble, intrepid representatives of a besieged population, like U.S. General Chennault’s original Flying Tigers, American pilots who came to the rescue of China before the formal outbreak of war with Japan. I liked the comparison, not just because it was a reminder that Chinese and Americans had once been comrades in arms, but because derring-do in difficult situations could change the course of history.
A workers’ brigade followed on foot and bicycle, filling in the elastic wake left by the Flying Tigers, and the shouts of the marchers were, if anything, louder than usual, matching the noise of vibrating mufflers with vociferous militant chants.
“Dadao Li Peng!” “Down with Li Peng!”
“Dadao Li Peng, dadao Li Peng, dadao Li Peng, dadao Li Peng!”
Bright surprised me by adding her voice to the cacophony of thousands below. Her father had worked for Zhou Enlai and her she was castigating Zhou’s adopted son, communist goody-two-shoes, Li Peng.
The tempo and pitch of the repetitive, catchy “Dadao Li Peng” slogan surged until it sounded like nonsense syllables. The rhythmic, hypnotic cadence reminded me of a cross between a Balinese monkey dance chant and John Lennon’s ditty, “number nine, number nine, number nine.”
“Bupaliuxue, bupazuolao!” “Don’t be afraid to spill blood, don’t be afraid of prison!”
Another rhythmic formula, but one I found considerably less agreeable. Why talk about spilling blood? What kind of bravado was that? Part of what gave the powerless, vulnerable students a modicum of moral power was their strict adherence to non-violence.
“Fandui junguan, fandui jieyan!” The angry protesters screamed. “Oppose curfew, oppose martial law!”
Pretty soon, Bright’s lips are moving in unison with the chanting of the crowd and she’s not just lip-synching. Her excited response to the rebellious currents roiling below confused me.
One day she tells me the government is going to be overthrown, the next day she advises that I quit the BBC to avoid arrest. So what’s with martial law? It’s serious, she says, but the hour of implementation keeps changing. It’s dangerous, she says, but she rides her bike here and she’s out on the porch shouting slogans in solidarity with the radical marchers below.
Given the contradictory streams and adverse currents, I wondered if it were possible to hate Li Peng and like martial law? 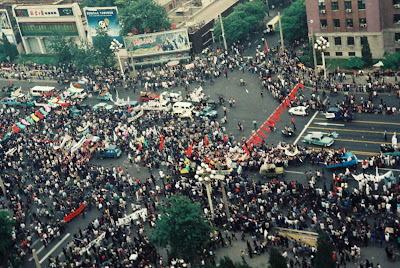