Walking through cramped studios and cacophonous corridors filled with actors and extras singing, chatting, rehearsing their lines and doing last-minute checks of costumes and make-up brought back memories of working on epic China themed films such as the Last Emperor and Empire of the Sun. It always amazes me to see how relaxed and informal show business people are immediately before and after stepping on stage where they then get into character, momentarily transforming themselves into living works of art.

Here, then, a sneak preview of CCTV's National Day extravaganza, with clips taken on my Iphone. The photos illustrate various stages of China's development, while the video clips are taken from a choral tribute to the "The East is Red," along with some behind-the-scenes moments. 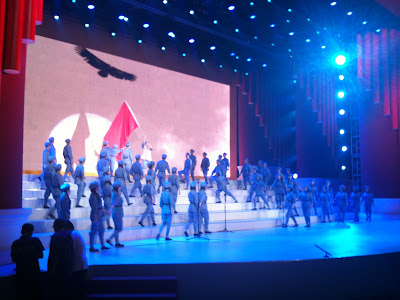 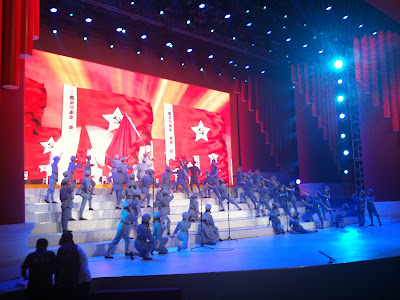 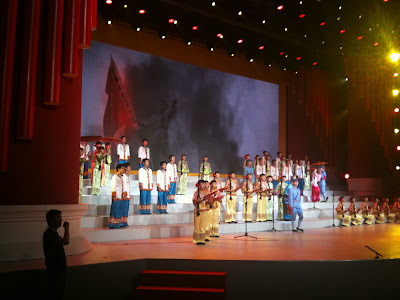 The limited light range of the Iphone created an interesting effect as the actors rushed off stage.

Once offstage, the performers share a crowded hallway with a cleaning lady --the sort of working class hero being extrolled in song on the stage-- yet one who is clearly underwhelmed by the beautiful voices and even less impressed with my attempt to get a picture, to which her curt response is "hurry it up!"


Even if working class heroes aren't quite what the used to be, the East is Red, a folk song turned Maoist anthem, has a staying power that defies the decidedly non-Maoist individualistic rush to riches characteristic of today's China. In its current incarnation the anthem summons nostalgia for a far simpler, if not entirely happy time of forced equality and collective living. The song's folksy appeal suggests that the melody will live on, one way or another, with or without the controversial lyrics.
on September 14, 2009