THE GRAY LADY GETS IT WRONG, AGAIN 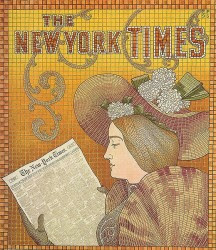 
The New York Times set the tone for its recent China quake coverage with a devious headline:


What’s wrong with the headline, affixed to an April 17, 2010 report from China by Andrew Jacobs?

Let’s first consider headlines you are unlikely to ever see on the pages of the New York Times or any other decent newspaper.

Now take another look at the NYT headline. It’s simply not up to good journalistic standards, is it? In fact it is insulting, if not borderline incendiary.

To say that “Jews distrust America’s help” is to be crude and insensitive. Such a headline commits a double indignity, slyly suggesting that Jews are not really American and Americans are not really Jews.

And it strikes close to home, so the NYT wisely avoids it.

Now what about China? Ethnic Tibetans in Qinghai are Chinese citizens. Even the Dalai Lama agrees with that.

So what business do the suits on 41st Street in Manhattan have declaring independence on behalf of ethnic Tibetans in Qinghai?

If you desire to play up ethnic tensions while reporting on an earthquake, as the NYT apparently sees fit to do, it would be linguistically more accurate to say that “ethnic Tibetans distrust Beijing” or “local Communist Party officials” or whatever group you seek to pit against the quake-ravaged citizens in that particular region of China.

Just look at those poor people, victims not just of nature's wrath but undemocratic governance as well!

Such schadenfreude is not unusual in tabloid journalism nor is it unknown at the uppity Times, which in a similar vein sensationalized the May 2008 typhoon in Burma to the point that a naïve reader might agree with calls for the US to invade and take over to save the Burmese from themselves.

The editorial voice of the "Gray Lady," often echoes the harangues of its star columnists Nick Kristoff and Tom Friedman. The tone is smug, the moral posture is high-dudgeon, framed as it is within a triumphalist American narrative. Americans make serious mistakes, and the NYT reports on many of them (when not besides themselves coddling sources in Washington and supporting various wars and so-called humanitarian interventions) but come what may, the royal “we” are basically the good guys.

NYT coverage of Asia is rarely free of agenda. Take China, example. Beijing has an undeniable record of economic accomplishment, which is reluctantly reported, but it gets hammered, not just for demonstrable faults, but for not being more like “us.”

Coverage of Thailand has taken on an oddly pro-Thaksin tone, despite the bloody machinations of the former authoritarian ruler, perhaps because he was masterful at going through the motions of a democratic process that Americans like to validate.

Earth calling the New York Times; people and places that do not adhere to your version of American values are not always in the wrong.

Despite some superb writing and crack investigative reporting, the NYT is infected by a ready-made Manicheaen narrative that sullies its objectivity. It’s as if the understandably partisan coverage inherent to sports, in which the home team can make mistakes but do no wrong, while the other team can accomplish good things but do no right, has leaked into the news pages as well.

It has recently been pointed out by David Rosen in Counterpunch, for example, that NYT coverage of allegations of abuse on the part of Hasidic Jews in Brooklyn, dims in comparison to the apparent glee with which the NYT has gone after the Pope for abuse scandals in distant Europe.

Sometimes the Gray Lady really is an eminence grise of sorts, embracing the status quo and maintaining political correctness close to home while wagging the finger and assuming a tut-tut, take-no-prisoners approach abroad.
on April 21, 2010