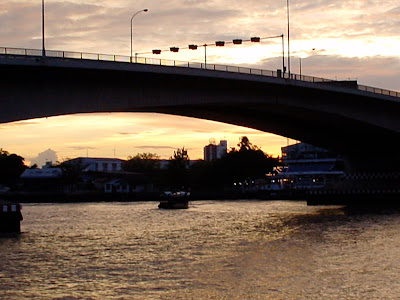 This essay was first published in the Bangkok Post on May 24, 2010 as "The pain and sorrow of two cities in crisis"

September 11, 2001 might well have been the worst day ever in the history of New York, but it was pretty much just another day in Bangkok.

I was riding in a taxi from Soi Aree to Sukhumvit when I first got news that my hometown had been struck by some kind of shocking attack. The Thai driver, who had his radio on, was upset. Then he told me, in a kind and commiserating way, that a plane had hit New York's World Trade Center. I understood every word he said, but somehow it didn't add up. I tried to convince myself that I had misheard, so shocking was the news.

A short time later I was with a group of mostly American friends, watching TV in horror as the second tower came down. We found what scant comfort could be had at a time of a great human tragedy by obsessively searching for information on TV and online, commiserating quietly.

The next day I had to teach even though my mind was numb, still in mourning for my hometown, the news full of apocalyptic images. I took the skytrain from Soi Aree to Siam and walked to the faculty of communication arts at Chulalongkorn University. Before class, I heard some students chatting to one another in the hallway.

"Did you hear about the World Trade?"

"A plane crashed into it."

"Taay leao! Right there in Ratchaprasong?"

"Oh, you had me worried for a minute."

I said nothing, but the ignorance and apathy of the second speaker left me feeling sick. I went to the dark, air-conditioned faculty meeting room, where a group of students was gathered, watching TV. Finally I thought, someone who will understand. But they were watching a badminton match broadcast from Malaysia and were reluctant to change channels. Again, I felt a silent pain I couldn't express.

On my way back to my office, I saw a fellow ajarn in the hallway, choked up, with tears in his eyes. He said how sorry he was to hear the news from New York. He didn't say much, he didn't have to; he understood.

I felt reconnected with the human condition.

In the days that followed, I carried a sense of inner pain that wasn't easily translated. I was offended by what was and wasn't on Thai TV, at once not enough news, but too much sensationalism. But what really riled me was seeing a televised report of a hair styling contest in which one of the Thai contestants had her hair done up in a double beehive, representing two towers, complete with a toy plane crashing into one of them.

I stopped watching TV. But the newspapers by then were all reporting the callous words of then prime minister Thaksin Shinawatra, who, when asked about the terror attacks on America, replied thus.

He said Thailand was neutral so it was no matter of concern.

Neutral between what two sides? Killing and being killed? Terrorists and victims of terror? What was there to be neutral about?

And even if Thailand didn't happen to be a close ally of the United States, wouldn't a word or two of sympathy be in order, just on humanitarian grounds?

Now Bangkok has been struck with a huge tragedy and in an odd parallel to 9/11, Bangkok's "World Trade Center", now renamed CentralWorld, has been hit so bad by arsonists it looks like the Pentagon after a jet crashed into it.

If my own feelings about New York, and my adopted home of Bangkok are any guide, it's not just a hole in a building, but a hole in the heart of the city. And the photo of a tattered Thai flag and wide-eyed modernist statue backed by the gutted building will no doubt become an icon of the shock and pain for many.

What has happened in Bangkok in recent weeks has created an open, gaping wound that will take years to repair.

For many Thais, foreign news coverage of domestic turmoil rubs salt in an open wound, especially when it is rife with error, lacks balance, makes sensational claims and tries to fit Thailand's tragedy into simplistic narrative frames in between frequent commercials. CNN, which seems to work on the assumption that anti-government forces are always right, even during riots (except in the US), gives undue airtime to overly made-up, puffy-haired announcers with fancy graphics tools who make ignorant comments about Thailand.

No better are the surprisingly insensitive comments about the torching of Bangkok made by famous academics, such as "All of this is justified", or "The farmers of Thailand have stood up!"

Just what farmers would that be in reference to?

Much of the academic comment to date reeks more of intramural red versus yellow intrigue akin to a heated sports match than a heartfelt concern for people on the ground.

As I came to understand after 9/11, even trivial comments hurt people when they are down.

There was a sense then, and now, of disbelief. If only it were a dream, or if one could turn back the hands of time, but you wake up each day and the hard truth is still there.

But time does heal, and facing the truth squarely does help. New Yorkers were distraught, at times riven with rage and riled up by callous comments made by cavalier commentators who chose to see 9/11 as just desserts or as someone else's problem.

US President Barack Obama has been prudently silent, despite the efforts of Thaksin's lawyer/PR flack who is angling to extract a trumped up "human rights" condemnation of Thailand at a time when the country that offered to come to Lincoln's help with a supply of elephants during the US Civil War requires the understanding of an old friend.

After 9/11, New Yorkers got back to their lives and eventually the tragedy was put into perspective and taken in stride.

Best of all, New Yorkers emerged from the political crisis as open and big-hearted, tolerant and as cosmopolitan as ever.

New Yorkers discovered that terror ceases to intimidate and divide when hatred and fear are let go of and people instead come to grips with the problem in a way that allows them to fortify their spirit while getting on with their lives.

At a time in the life of my country when I required quiet commiseration and understanding, many individuals in Thailand, including a taxi driver, my students and my colleagues at Chula, reached out with quiet understanding.

I wish to share the same sentiment with the good citizens of Bangkok and the provinces who have been hurt by recent events and are still reeling with shock, sadness and disbelief.

Philip J Cunningham is a freelance writer and political commentator
on May 25, 2010