FISHING FOR TROUBLE FAR OUT TO SEA 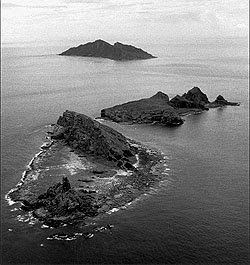 China, Japan, Russia and America are vying to assert influence over a handful of disputed isles and islets lying off East Asian shores.

Disputed islets may appear to be mere points on the map; but depending on which points you lay claim to and how you connect the dots, a nation's outline shrinks or swells far beyond its shores, its periphery defined by vanguard islets that extend territorial waters far out to sea.

The disputed islets are a cacophonous crossroads in the cross-hairs of powerful regional actors. Because the islets have changed hands and flipped political polarity more than once in the past, every claimant has at least a half-convincing story to tell.

It's hard to discuss any of the fiercely disputed islets that were once part of Imperial Japan without bringing back divisive memories of a war that took tens of millions of lives.

That places like the Senkaku/Diaoyu turn out to be adjacent to massive undersea oil and mineral deposits; that the Southern Kuriles/Northern Territories are fertile fishing grounds, are both cause enough for tension, but resources are not the root of the problem.

If it were just a matter of figuring out how to best tap natural resources and fishing rights, economic disputes could be settled through negotiation and win-win joint exploitation of underwater riches. But the reality is far more complicated than that. Not only did the Okinawa impasse cause the Asia-leaning Hatoyama government to topple, but it has warped the administration of Naoto Kan, which is currently hamstrung by its provocative, pro-US Foreign Minister Seiji Maehara.

Okinawa, coveted to this day by the US for its commanding position in the West Pacific, could theoretically be a kind of Singapore, a free trade entrepot rather than a sequestered armed camp, were it not for US policy, and Tokyo's willingness toe the line.

The Southern Kuriles, recently visited by Russian President Dmitry Medvedev, despite howls of protest from Japan, was not only once under Tokyo's control, but Etorofu islet was the launching point for Admiral Yamamoto's sneak attack on Pearl Harbour.

The protracted war that followed the audacious Dec 7, 1941 attack on Hawaii was, from start to finish, about the control of pinprick points on the map dotting the vast Pacific. Invoking the names of contested islets in the Pacific War -Guam, Wake Island, Midway Atoll, Guadalcanal, Iwo Jima and Okinawa- is more than a lesson in island geography; it's a reminder of sacrifice and mass suicides, deprivation and death. It's a mournful roll call of the fallen and the dead.

Okinawa was the scene of one of the bloodiest confrontations of World War Two, with battles killing in the many tens of thousands on both sides and one-fourth of the civilian population wiped out.

Memories of past loyalties and hatreds linger while disputed place names bring suppressed emotions to the fore, complicating any straightforward solution based on shared economic opportunity or common sense.

Disputed islets tell the story of the rise and fall of empires, of audacious aggression and shocking reversals of fortune, a series of historical traumas, some of which inconveniently get in the way of present-day claims.

The Japanese right-wing in particular seems to suffer from selective historical amnesia. The warrior wannabes glorify the martial spirit, but overreact to a bump from a Chinese fishing boat, forgetting their country brought untold death and devastation to millions of Chinese. They fume about the Russian occupation of a handful of islets near Hokkaido, but chose not to remember Japan's armed invasion and conquest of Asia.

In fact, Japan emerged remarkably intact despite being the aggressor in a lost war. Had the US not hastened the war's end with the brutal shock and awe of Hiroshima and Nagasaki, essentially freezing Russia out of participation in a joint invasion of the common enemy, Japan would have been divided in two, split down the middle as Germany was, with Tokyo a Berlin of sorts, straddling an uneasy DMZ between Soviet and US zones of influence.

As it turned out, America won the race to occupy Japan, leaving Korea, ever the hapless victim of geopolitics, to be divided instead.

Okinawa too, could easily have slipped from Japanese control, permanently, as a legitimate spoil of war. Although Washington "handed it back" to Tokyo in 1972, and arguably the Senkaku/Diaoyu islets along with it, it was not pre-ordained reversion but rather part of a Nixonian horse-trade involving US domestic politics and a textile tariff dispute.

These and other disputed islets, such as the Paracels and Spratleys, lie in a veritable ring of fire, prone not only to tectonic plate shifts and volcanic activity, but abrupt political eruptions as well.

All it takes is an incident, an accident or a controversial visit and suddenly some little islet on some remote seabed looms large, bursting into public view with pent-up fury, whipping up a storm of incendiary rhetoric and spasms of outraged nationalism. But it's not just hot air; feelings run deep because the stakes are truly high.

Tokyo, under prodding from the Pentagon, is making an awkward return to its former Cold War self, re-affirming its strategic ties with the US and the "free world" in opposition to Russia and China.

A new Cold War is one possible outcome, a hot war is not out of the question. Each of the contesting powers is guilty of the understandable but faulty desire to paint in as much of the map as possible the colour of its own flag, setting the stage for continued conflict.

Vying for control of the islets is not just about resources, it's a battle to reclaim history, to demarcate and delineate for one's children and children's children, national narratives about victims and victors, the wrong and the wronged, injustice and justice.

Given the enduring power of memory, remembrance and retributive narratives of just desserts, any future attempt to settle such geographic disputes must first take history into account.