WHEN A PIVOT ISN'T A PIVOT 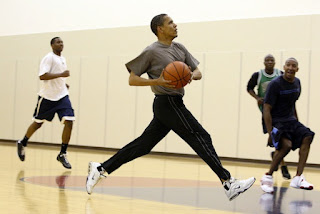 US Secretary of State Hillary Clinton comes to Asia again, trying to keep US President Barack Obama's so-called "pivot strategy" alive. The whole idea of a pivot, which reflects Obama's fondness for basketball, is to feign movement with one foot nailed to the ground; to block, drop back, step forward, fake and roll without actually going anywhere.
Imagine a map of the world painted on a basketball court. The star player of team United States has just finished dribbling, but because of lack of foresight, finds himself with one foot stuck on the Afghan-Pakistani border, somewhere in the middle of the court. The other foot is free to move. Given superb agility and a poker-faced ability to fake, he's here, he's there, he's everywhere all at the same time. He pretends to be on the offensive when in fact he's bogged down. His perimeter of action is tightly hemmed in, because the pivot foot is stuck in the wrong place.
As national coach, Obama is not just in charge of overall strategy, he calls the shots and can make substitutions too. That's where the indefatigable US secretary of state comes in. Clinton, a once-feisty presidential hopeful who didn't make the cut at the Democratic convention, has been nothing if not a good sport. She has served Obama loyally ever since losing to him, carrying out his vision with an admirable feminist touch of her own.
Being substituted late in the game may be a dubious honor - the player/coach is pre-occupied with hanging on to his job for another season - but Clinton is a superb team player. She will represent the US at the Asia-Pacific Economic Cooperation leaders' summit in Vladivostok, Russia, instead of the president.
She's got game.
A glance at Clinton's itinerary suggests a grueling schedule. Given the inherent limitations of the US' pivot strategy and mounting tensions in the region, her road trip calls for nothing less than an all-star performance.
Issues bound to come up at the APEC meeting, if only on the sidelines, include the new leadership in the Democratic People's Republic of Korea and the island disputes in and around the South China Sea.
China's claims to the Diaoyu Islands are as good as anyone's, and probably better, but all parties need to step back and put things in perspective.
After the defeat of imperial Japan in August 1945, the US took control not only of the home islands of Japan, but simultaneously "inherited" Japan's vast militarized archipelago of islets and remote airfields that stretched across the Pacific and read like a roll call of tragic battles: Saipan, Guam, Guadalcanal, Okinawa, Iwo Jima.
It's the folly of World War II that so much blood was spilled over control of rocky islets and sandy beaches; let us hope the insanity of the past will suffice as a warning to the wise in the present day. If the rocks can't be peacefully sorted out according to national claims, then leave them to the seagulls and the crabs.
Japan's intransigence about far-flung territorial claims is particularly hard to fathom given its undisputed role as aggressor nation, aligned with Nazi Germany. It invaded nearly all of its neighbors, left millions dead and committed unspeakable war crimes in China, Korea and Southeast Asia. Is it not a bit unseemly for Japan to be tussling over territory that it once used as a springboard to terrorize its neighbors?
Tokyo, which is so co-dependent on Washington to the extend that it actuallypays the US for the "privilege" of having American troops posted on its soil, seems content with ambiguous assurances that the US is more or less on its side in its simmering territorial disputes.
The US is silent in the face of Japan's right-wing revisionists who clamber for remote rocks that were once part of a vast malevolent empire, an insult to all victims of Japan's war of aggression, including Americans. The attack on Pearl Harbor was launched from the Southern Kuriles (known as Northern Islands in Japan), which have been a thorn in the side of Tokyo-Moscow relations since the end of World War II.
Given the simmering tensions in the South China Sea, some of which have been inadvertently, if not intentionally, stoked by the inherent vacillations of an ill-placed US pivot, it is hard to see how Clinton can command the court.
Her grand tour includes China, the Jupiter of nations, and the Cook Islands, a mere asteroid. It includes Indonesia, a huge country where her boss spent the formative years of a Cold War childhood, and the miniscule Brunei, which suggests a hidden US hand behind the David and Goliath dynamic in territorial disputes between insular Southeast Asia and China.
Her tour also includes East Timor, a historical victim of deliberate US neglect.
Thus Clinton will paradoxically be paying respects to both victim and victimizer, though in a broader sense, all of Southeast Asia was the victim of a cold-hearted Cold War policy in which war and military-backed opposition to communism trumped consideration for democracy and human rights.
Given the long violent streak in US foreign policy, from the days of the Korean War and the Vietnam War, to more recent bellicosity in Iraq, Afghanistan and Pakistan, not to mention the incessant bullying of Iran, it is ironic, and just a tad bit hypocritical, that Clinton's team should portray the US as the ultimate peace-maker in a troubled neighborhood.
"We don't want to see the disputes in the South China Sea, or anywhere else, settled by intimidation, by force," said US State Department spokeswoman Victoria Nuland. "We want to see them settled at the negotiating table."
If only the US adhered to its own advice, instead of being the world leader in making weapons, and selling and using them, Clinton would have an easier job of spreading peace and democracy.