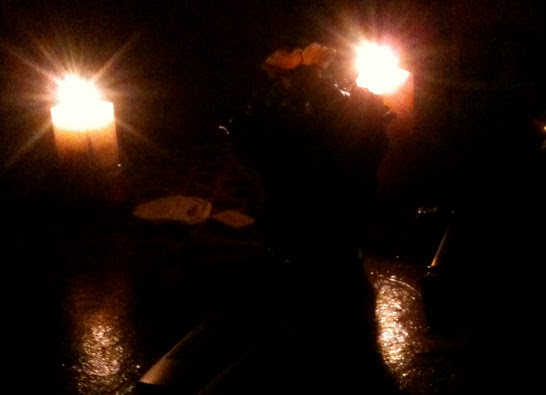 It really was a dark and stormy night. The surf was up, the wind howled, the lights flickered and the windowpanes buckled a bit, but it felt reassuring to be in a cozy apartment with the modern world at one’s fingertips, constant updates available by phone, internet and TV.

I was back in my hometown on Long Island over the weekend for a Lynbrook High School high school reunion; just hours after the farewell brunch held at the dockside Porthole in East Rockaway, onward travel became impossible and I ended up getting a front-row seat as the Atlantic Ocean released a once-in-a-century fury. Superstorm Sandy hit hard, as expected, but the collapse of infrastructure still came as a surprise. Witnessing the storm from an ocean-facing apartment in Long Beach, New York was fun at first, like an added bonus to a nostalgic reunion. It was special to stand with childhood friends, watching impossibly huge, windswept waves break on a beach full of summery memories.

Then the lights went out, telephone and cable followed, and cell phones went dead. Electric power, the juice of modern civilization, was gone with the flick of a celestial switch.

Losing electricity at such a time is to be hurtled a hundred years back in time when our technology was no match for nature. The Internet cloud we have come to depend on was suddenly out of reach, as if blown away by the gale force winds. I-pads, I-phones, cell phones and other sleek artifacts of our busy, hectic modern lives were rendered cold, dark and unresponsive.

Then, as the high tide combined with the pull of the full moon and the surge of a tropical cyclone, the sturdy wooden boardwalk was breached by thundering waves and foamy torrents, as the high tide got  higher and higher. Water spread across the barrier island of Long Beach until the ocean met the bay. Cars were lifted in the swift flow, flipped around and floated like toys, while boats, broken from their moorings, drifted into parking lots, train tracks and homes.

Long Beach, Long Island, like many other seaside communities in New Jersey and Staten Island, was suddenly off the radar, out of touch, hidden in a black hole of sorts. No news in, no news out. Actual conditions in the immediate area were less than grievous, the apartment building weathered the storm except for the flooding on the first floor, but there was no way of knowing what was happening more than a few hundred yards away.

People in the apartment building lit candles but the mood was less than romantic, sharing stories about loss of water, dripping freezers and toilets that didn’t flush.

At one point, several residents gathered under the fading illumination of an emergency light on the third floor to share what little information there was to share.

I missed my computer. It’s both a testament to our entertainment-addled age and the critical need for reliable information in a time of crisis that we all hungered to be connected electronically to the larger world. We ended up gravitating to windows, watching the weather and swirling cars and water surges below. 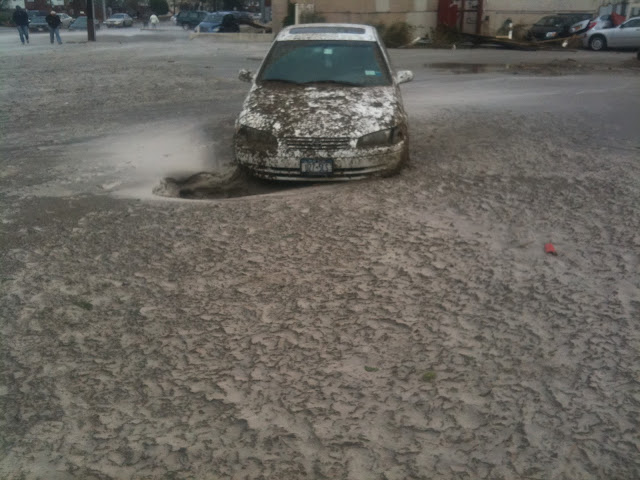 With daybreak, it was still difficult to assess the damage. The waters had receded, reduced to puddles and ponds banked by sand plied as thick as snow drifts. I ventured down a pitch-black staircase and forded a flooded entrance lobby. The force of the high water had smashed the front door, glass shattered to bits. I climbed up the cracked ramp of a broken and twisted boardwalk and headed west along its buckled, bent, surface wending my way towards a hotel where I thought it might be possible to get food and water. Dangling wires, collapsed walls, a drowned cat and beached fish, splintered planks and exposed nails demanded slow going, even though fierce squalls and hurricane gusts thrust me forward and made me reach for the non-existent guardrail that was washed away by the storm. 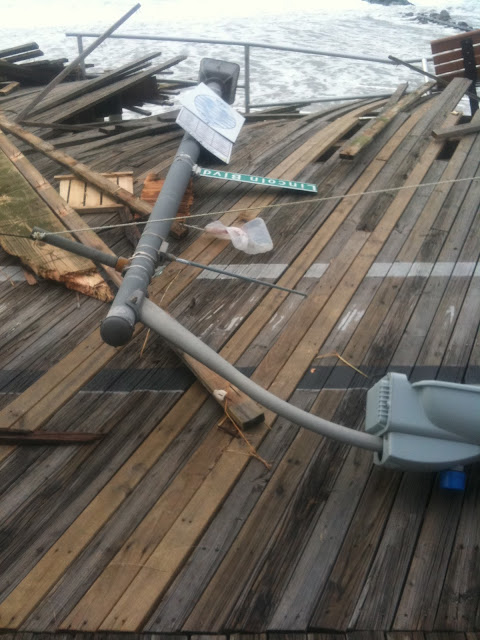 There were a few police cars in sight and some national guard jeeps and armored personnel carriers, grinding up and down the sandy boulevards downtown, but most residents had little choice but to venture out on foot.

The nearest hotel was flooded, vehicles around it embedded in sand, but the boardwalk level lobby was intact and there were a few people milling about nervously. I figured where people gather, there was news to be found; I hoped to add to my limited understanding of what was going on the work of many eyes and ears, the word of travelers passing through.

In the ocean front café there was no toast or coffee to be had, the kitchen was understandably out of commission, but the hotel staff put out a table of bread, jam, juice and bottled water, and handed out flashlights to those venturing up and down dark hallways and unlit staircases. The telltale trucks of TV news crews were parked outside, a promising sign as there was something I was craving more than food; information. 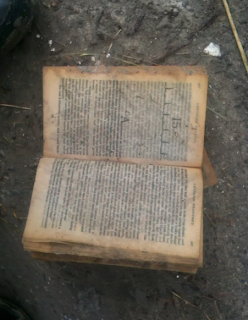 I ran into a man in the lobby whose home was destroyed; he carried with him a backpack and a crate of weathered files and papers. Several TV crews spent the night in the hotel, another had just arrived, driving in from lower Manhattan across the only bridge open. Curfew was yet unenforced and the toll booths unattended.

What was happening? Damage? Casualties?

Reports of fire and flooded homes in neighboring coastal communities were not entirely unexpected, but it came as a surprise to learn that lower Manhattan and much of Long Island was blacked out. What's more, Long Beach had no water, the sewage system was broke and most of the cars that at first glance appeared to have escaped the storm unscathed, but for a coat of sand and brine, were rendered inoperable. 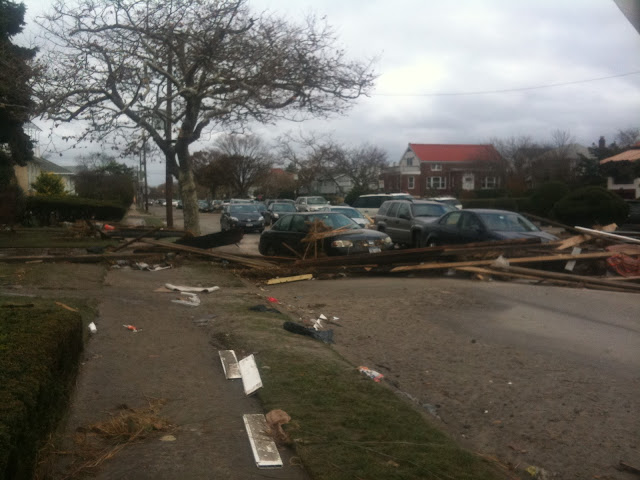 After exchanging updates with a determined British camera crew who were fighting the wind to film from the boardwalk, I volunteered to be their local guide, showing not just the storm damage, but also helping to win the cooperation of locals and put things in context of a beach community just miles from where I grew up and went to school. For the first time in a long career in journalism, I was in effect, a native informant. 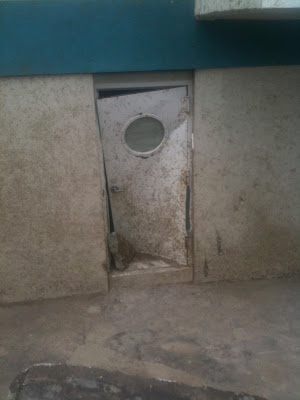 Covering Long Beach with a British news crew  brought to mind years in the field; traipsing through the ruins of earthquake-damaged Japan, of riot-torn Bangkok, of China on the cusp of an uprising with foreign TV crews, looking for local informants. It gave me a better understanding of how frustrated people used the camera of a foreign news crew to deliver an oblique criticism of their own leaders, why some teary-eyed people might gush off camera but not on camera, because they were in no mood to perform for a camera, or why interviewees, after baring their souls and sharing their sorrow, would ask small favors, and tidbits of the latest news, from a crew that was in possession of a working vehicle, bottled water and links to the outside world. 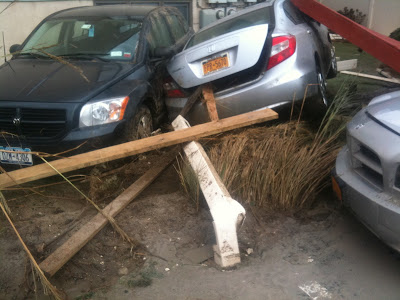 The usual practice for TV news crews is to shoot first, ask permission later, if at all. This created some tension while navigating the thick patchwork quilt of American ethnic diversity. One minute we'd be in the swamped home of a retired, Irish American cop, engaged in a lively conversation that could have gone on all day, the next minute we were intruding on the privacy of a stunned, broken Latino man whose basement home was entirely under water, colorful plastic toys floating like buoys. When the camera rolled, he froze, unable to communicate in English, instead releasing in a torrent of Spanish. He expressed the fear he felt for his three year old child, caught between flood and high winds at midnight until offered refuge in his neighbor's house.

We tried talking to national guardsmen in camouflage uniforms and Federal Emergency Management Agency officials, but they seemed to know little and said even less. At one point our cameraman approached a long line of African-Americans lining up for water, only to be yelled at and chased away by a community organizer. "Turn that damn thing off, we have enough to deal with as it is."

The crew was operating on London time, which meant that the 10pm news deadline was rapidly approaching, so we made a dash for New York City along debris-strewn deserted roads, crossing empty bridges, passing a looted shopping center and an eerily immobile airport, finally crossing through blacked out sections of Flatbush to reach the one link to Long Island that never closed down, the oldest and most solidly built bridge of all, the Brooklyn Bridge. The driver for the rented van, an immigrant with a weak command of English, knew the roads like the back of his hand and was our steady compass under chaotic conditions of storm-swept highways and blacked out traffic lights.

Coming into Manhattan from the bridge it was immediately obvious there was no power, which made the little light left in the gloomy late afternoon sky all the more luminous.

We pulled up to the entrance of a five star hotel next to Ground Zero, the crew keen to get back to their rooms to find a coddled refuge from the storm, only to find chaos. No lights of course, but did the toilets all have to be out of service too? Elevators stuck. Staff overwhelmed with disgruntled luxury guests. I couldn't wait to get out of there. I headed north on foot walking block after block along blacked out streets and past boarded up shops until I got to midtown and suddenly the lights were on and mood almost festive, streets packed with pedestrian refugees escaping the Stone Age reality of life in the marbled canyons of a lower Manhattan deprived of power, food and water. I later read a tweet that described the transition perfectly; it was like going from East Berlin to West Berlin. 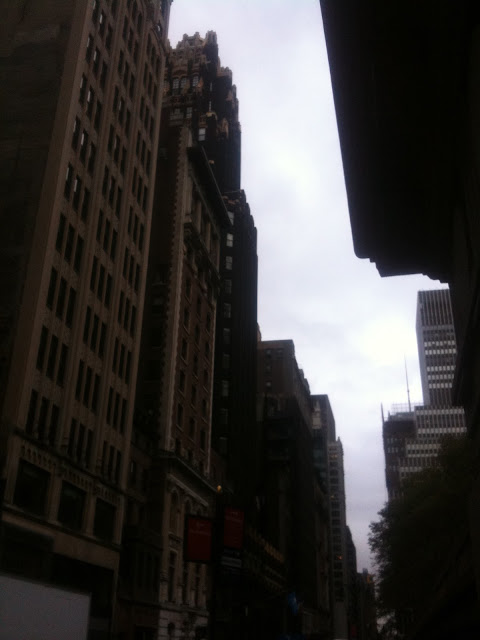 On 31st Street, I found a Korean restaurant, tables packed, and had a bowl of hot soup, thankful for small luxuries like a warm, well-lit room, with hot food. Then I joined the northward flow of New Yorkers who were also moving from the dark zone to the light zone. There was a stark faultline between power out and power on neighborhoods; traversing the two was as dramatic as leaving a static monochrome Kansas for the living color of Oz.

In days to come, there would be candle-lit gatherings in beachfront homes of childhood friends, filling the long night with stories and curfew-defying moonlit walks along the shore where the ocean now lapped like puppy trying to reclaim it’s innocence. In time tempers would flare and the mood would grow gloomy as attempts at power restoration failed, gas supplies dwindled, and those with more turned their backs on those with less, as politicians went about bickering and campaigning as usual, as life went on, at most gently interrupted for those outside the disaster zone, while those inside suffered in silence, trying to save hearth and home, trying to keep their dignity after being battered and exposed by the storm.

I saw in this similar dynamics to disasters in Asia and elsewhere; the stunned silence, the sense of being neglected, the shock, the uneven burdens of rich and poor, only this time with a strong Long Island accent.

As a journalist I have been a frequent witness to disaster and its aftermath, most especially in poor and developing countries, but it wasn't until Hurricane Sandy hit my ostensibly modern hometown in the New York metropolitan area that I realized that it only takes a dark and stormy night  to pierce the comforting veneer of civilization. The third world is here, it is everywhere and it is us. 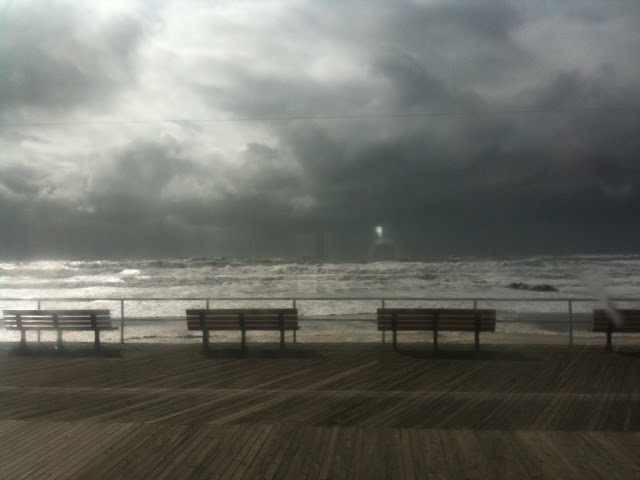