THAILAND: FIRE IN THE SOUTH


Perhaps one day there will be a monument to all the brave teachers who sacrificed their lives trying to keep alive the light of education in Thailand's strife-ridden southern provinces.

"NO MATTER THE DRAMA, THE JOKER'S OUT TO PLAY" 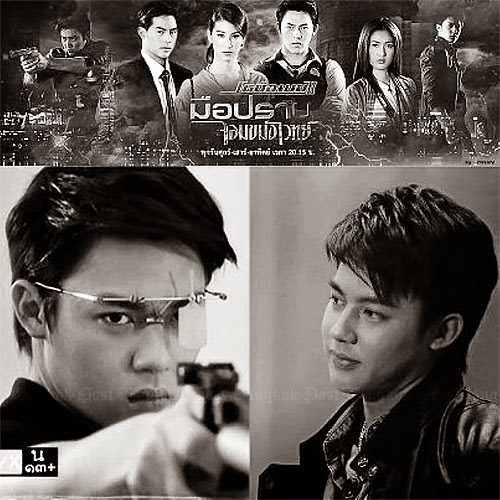 Two of the actors in and a poster of in the ‘Nua Mek 2’ drama series, whose ban is causing a social stir and threatening to implicate the Yingluck government and the ruling Pheu Thai Party.

The case of the popular soap opera Nua Mek is unusual because it's not everyday a powerful TV station suddenly self-censors, unilaterally banning its own popular show, without a plausible explanation.Spokesmen for the government headed by Prime Minister Yingluck Shinawatra have been quick to deny political interference in the programming schedule at Channel 3. If that is true, then the wooden-headed, tone deaf whisperer who discreetly suggested that the popular TV show be banned is not technically a member of the government.
But the whisperer is clearly not a nobody either, but rather a person with the power to influence. Anyone with a voice compelling enough to stop a powerful, politically connected TV station dead in its tracks, causing it to lose masses of revenue and masses of viewer support is a contender. Such a fiat carries a kind of quasi-governmental authority.
Who could it be? The brass at Channel 3 are not talking, for reasons known best to them, but their silence and lack of transparency lend credence to the notion that the source of political interference is a gloved hand that doesn't want to be ungloved just yet.
A commercial TV licence is not unlike a permit to print money; it's a booming business when left to do what it does best, doling out commercial propaganda while entertaining the masses. TV stations are not without political influence either, any corporation which combines a healthy cash flow with the power to influence via the media and news delivery is a contender in its own right. But even a commercial powerhouse like Channel 3 has an Achilles' heel when it comes to getting its permit renewed. It is the prospect of losing the permit that makes a proud TV station humble, and ultimately beholden to a very small handful of individuals who are in a position to influence the granting and denying of permits.
Viewers of TV are not without a voice, though. The unspoken arrangement is for the viewer to subject him or herself to annoying adverts in exchange for information and entertainment. The adverts, even the less-than-annoying ones, need to result in ka-ching at the cash register, or sooner or later, the sponsors, looking at the bottom line, will pull out. Channel 3 is well within its rights to disappoint its viewers, but it's a two-way street. TV viewers are well within their rights to stop watching it, or more to the point, to boycott products advertised on that station.
In business terms, what Channel 3 did makes no sense, unless it was a very dumb and daring gimmick designed to shock and disappoint with the long-term goal of winning back a wider audience.
But from the best information available at the moment, it appears the TV station is not bold but rather timid. It paid for the drama, and was prepared to air one or more penultimate episodes, until a word from somewhere instilled a fear of going forward with the programme. There are only a handful of people whose whisper is forbidding enough to give a major moneymaker like Channel 3 cold feet.
There need not be a paper trail; word of mouth or an unmonitored phone call is sufficient to put the fix in, especially if the person doing the talking is in the habit of thinking for others.
Although the banning of the show is a political embarrassment that threatens to implicate the Yingluck government and the ruling Pheu Thai Party, the voice could very well have come from the margins of the Thai political world.
If so, it allows those in power to claim with a straight face, and at least superficial honesty, that "the government had nothing to do with it".
Let's assume the government didn't do it. So who's left?
Quite a few people, it turns out, because the quadrophenia of the Thai political system works in strange and unpredictable ways.
The multipolar quality of the system can be likened to the four suits in a deck of cards, in which the government is but one of four suits. To say the government didn't do it is merely to acknowledge that the government is not playing with a full deck.
There are other suits and other nuances that need to be taken into account.
Hearts - Ms Yingluck and the Pheu Thai Party might be charitably described as the hearts of the system. After all, her party is the natural successor to the Thai Rak Thai political machine, which for a brief, fleeting moment, hijacked the heart symbol as a political icon.
Diamonds - The financiers, unelected and perhaps unelectable, are wealthy, well-heeled and want influence. What suits them better than diamonds?
Clubs - The grassroot activists, modest and close to the earth, constitute the suit of clubs. Jatuporn Prompan, Prompong Nopparit and Korkaew Pikulthong are among the face cards in this suit. Nattawut Saikuar used to be a club, but he moved over to hearts in a reshuffle.
Spades - The Shinawatra clan, which has power in spades, yes, why not call a spade a spade? They and other in-country intimates are the colour cards at the top.
No matter how you shuffle the deck it's a compound government, no matter how you cut the deck, high cards beat low cards.
Needless to say, in this particular game, spades trumps the other suits.
But wait? Isn't there something that trumps even spades?
Yes, there is. It's the joker, the jester, the wild card, the trickster. Strictly speaking, he's not in the deck, but he would like to be, and until his card is drawn, he'll try every trick in the book to get back in the game.