HOW FAR WILL CHINA'S CRACKDOWN ON CORRUPTION GO?

How far will China's crackdown on corruption go? 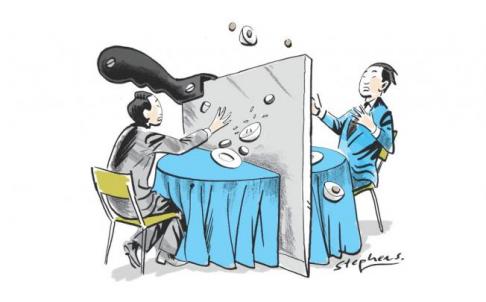 Incoming leader Xi Jinping has signalled that he wants to cut back on banquets, but it's too soon to say whether this means the Communist Party's anti-corruption campaign is for real, or is being used to manage public opinion.
Excessive consumption and corruption, especially on the part of state officials who are supposed to be public servants, does make a mockery of the "serve the people" ethos at the heart of good governance. China faces a destabilising inequality gap, so the waste of public resources on empty gestures - like showy motorcades, honour guards, over-the-top banquets, glitzy hotel receptions and lavish gift- giving - not only squanders funds needed elsewhere, but fuels indignation while eroding social harmony and self-respect.
Despite his revolutionary communist pedigree, it is unlikely that Xi will be saying "Farewell, my tycoon" any time soon, though. The get-rich-quick ethos launched by the canny "capitalist roader" Deng Xiaoping is still the default ideology in a nation bereft of meaningful ideology. Fawning over the rich and powerful and dispensing bribes to officials, typically in the hope of cementing connections, has already become a way of life. Laws that are mercilessly enforced when applied to little people rarely apply to the rich and connected in so-called communist China. The corruption and crony capitalism openly promoted by Deng's successor, Jiang Zemin, still runs deep, even though Jiang has been out of the limelight for a decade.
Putting on aristocratic airs has become so widespread that an everyday act as simple as the sight of US ambassador Gary Locke carrying his own bag and buying his own coffee was considered newsworthy in China. Where were his porters and servants?
There is corruption and then there is corruption. Cutting back on banquets is an easy mark, but what about the ill-gotten wealth of hundreds of billionaires and millions of millionaires in a poor, developing country with no social safety net?
Cutting back on banquets and the mao-tai toasts in the military is one thing, but what about restraining "dry drunk" generals gunning for conflict, high on China's newfound wealth, arrogance and advanced weaponry? There are many kinds of excess. The problem is not necessarily the perk; the problem is the quality of the work.
Toasts offered at lavish Nixon/Mao banquets in the name of US-China friendship in 1972 marked a turning point in diplomatic history. And even the most lavish food and beverage bill would be a bargain if held in conjunction with peace talks between China and Japan, for example, if negotiations could put to rest, or otherwise resolve, the explosive Senkaku/Diaoyu islet dispute. Bring on the sake and mao-tai! Fly in the best sushi and seafood!
Cementing deals over food and making toasts to friendship is an East Asian legacy that runs deep. Even in the 1980s, when China was much less affluent than it is today, and a good deal more egalitarian, being invited for a meal at someone's home was a grand gesture. The meal might have been cooked on a single-burner hotplate on a busy staircase outside a family's one-room apartment, but it was always a multi-dish affair, a way of showing generosity and respect.
What started out as a heartfelt gesture may indeed have been corrupted over time, but will a crackdown correct this? China has a history of swinging from one extreme to another, so even something as simple as a national drive to cut back on banquets needs vigilant monitoring. Is it just a sop to the poor, a showy show of belt-tightening, while the usual rules of a game rigged for the rich apply? Or is it the first shot in a new Cultural Revolution, which will eventually lead to tables being overturned in fancy restaurants and luxury cars flipped and torched by irate crowds?
The tendency for things to swing in China could very well have deep roots in the rise and fall of dynasties over the centuries, but, in more recent times, one need not look much further than the wholesale deracination from traditional culture, community and organic growth by decades of divisive and destructive Leninist-style rule.
Whatever the cause for China's distinct political rhythms - long periods of insufferable status quo, followed by brief revolutionary outbursts - it is the ordinary people who suffer most. Xi's populist appeal indirectly acknowledges there is a problem with hypocritical leaders, greedy tycoons, a politicised bureaucracy and erratic - sometimes negligent, sometimes overzealous - application of the law.
There are crackdowns that are mere political posturing. Others achieve the opposite of the intended result. Sometimes crackdowns are factional power plays, pandering to public perceptions, while quietly eliminating rivals and consolidating criminal networks.
You have greedy leaders calling for law and order even while they contribute to disorder and remain outside the law. You have police instituting crackdowns and curfews even as the children of the rich and connected continue to run wild and inebriated, bullying anyone who gets in the way, with "do you know who my father is?" And, like everywhere, you have silver-tongued politicians who talk the talk but don't walk the walk.
Experience suggests that anytime a powerful politician, especially one with vast, vested interests, takes to the media and stakes out the moral high ground against one apparent vice or another, one should snap to attention and listen. But don't judge them by their words; judge them by their actions.
Philip J. Cunningham is a media researcher and freelance writer, whose most recent book about China is Tiananmen Moon