The last thing we need is 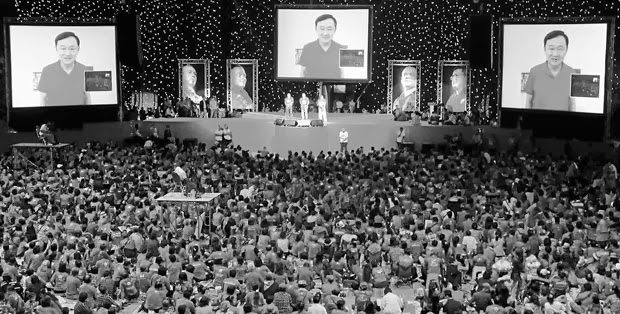 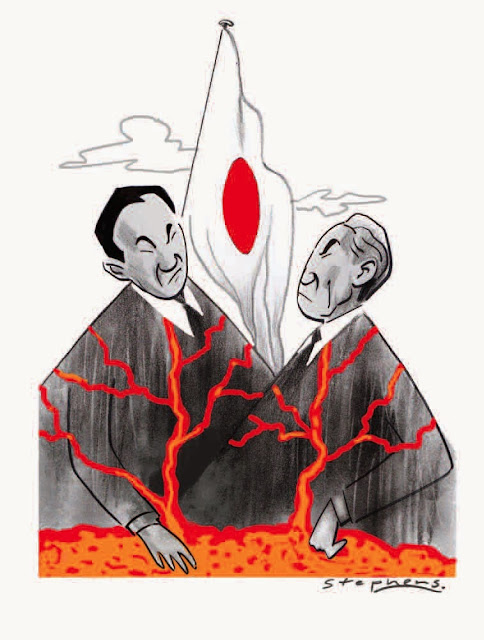 Japan’s in a cold burn now; cool on the exterior, simmering underneath. It’s obvious in a geological sense; Japan sits above an unstable hot zone, but it’s also a metaphor for a seemingly stable but deeply volatile and incendiary political system.

Take Mount Fuji, for example. It’s quintessential Japan; its understated majesty is the Yamato essence writ large. Graceful in contour, shimmering slopes, peak powdered white, clean and wind-swept by clouds, it’s in harmony with forest and field, its self-contained and tranquil, except when it’s not.

Mount Fuji last exploded in 1707. Now scientists are saying the current magma pressure levels exceed the parameters of the last cataclysmic blast. Small earthquakes rock the foundation of the mountain, while steam pressure is on the upswing.

The two-year anniversary of the March 11, 2011 triple disaster of mega-earthquake, daunting tsunami and the Fukushima nuclear meltdown is a good time to reflect on how shocks delivered by nature can alter the course of history. Especially since geologists say the big one is overdue and yet to come.

Before disaster struck, Japan was on a much-need path to political reform after decades of political cronyism and one-party rule. The Democratic Party was helmed by the straight-talking Naoto Kan, who first made a name for himself as Health Minister, apologizing for the previous administration’s malfeasance in the Aids-tainted blood scandal. As prime minister he had the political courage to call for higher taxes, unpalatable but necessary medicine, and he offered Korea an apology for Japan’s annexation and predations dating from the century before. With such an agenda, it comes as no surprise that Japan’s stalwart rightwing was gunning for his political demise. Rightwing hotheads in Japan’s Coast Guard almost single-handedly succeeded in creating a crisis with China in 2010, putting the Prime Minister in the hot seat due to the pre-emptive arrest of a Chinese fishing boat captain whose boat had collided with a Japanese patrol boat in the disputed island area. But wiser heads prevailed.

The day after the giant tremblor struck, the hapless Kan flew to Fukushima to examine damage and find out what was really going on from the information-inhibiting, politically connected nuclear industry. Again he showed uncommon courage in trying to uncover the cover-up, though he was vilified for suggesting that Tokyo might be at risk, which it was. His subsequent condemnation of nuclear power and proposed freeze on building new plants, along with the closure of plants deemed at risk sealed his political fate; he was blamed for post-earthquake malaise and vilified by the old rightwing aristocrats who efficiently exploited the “geo-political” crisis to plot a comeback.

And comeback they did, a team of rightwing militant apologists the likes of which Japan hasn’t seen since the war years. The current cabinet includes two recycled prime ministers from blue-blood families (they are both grandsons of prime ministers) with roots in war crimes and labor exploitation.  It includes second and third generation LDP insiders, strong proponents of nuclear power, text-book revisionism advocates and the son of former Tokyo mayor Ishihara Shintaro, instigator of the latest Diaoyu/Senkaku dispute and infamous in China for denying the Nanjing Massacre.

Abe’s grandfather Nobusuke Kishi enhanced the family fortune exploiting Chinese labor and manufacturing munitions in the Japanese colony of Manchuria; he was indicted but not convicted as a class A war criminal and later became prime minister. Taro Aso’s family built its construction business fortune with the involuntary help of Allied POWs during the war years. Neither man has offered a public moment of reflection or inkling of remorse for the crimes of their ancestors, let alone the inequities of their own cozy business ties and reckless rightwing demagoguery. Despite the devastation wreaked across Asia by the militaristic upheaval and incendiary foreign aggression of Tojo’s Japan, Abe, Aso and most members of their like-minded cabinet, are advocates of white-washing the past. They have repeatedly sought to beautify an ugly chapter of Japan’s history with ritual visits to pay respect to war criminals at the Yasukuni war shrine, while also meddling with textbooks, denying compensation for comfort women and refusing to comment on forced labor abuse in their own family tree. They are hawks on China, hawks on North Korea but play lovey-dovey with the US, quick to accommodate the Pentagon’s power, and abuse of power, in the region.

Their political foundation is in the politics of denial; they deny the past and any wrongdoings linked to their clans, while they also deny the average citizen a fair chance by rigging the game with collusion between political insiders, industrialists and bureaucrats.

But the more general denial of reality that has descended upon Japan’s embattled citizenry is less self-serving and more understandable. Denial is not just tempting, but perhaps vitally necessary in a land where the ground shakes violently underfoot without warning and the archipelago’s most beautiful mountain is overdue to explode.

A sober lesson can be drawn from the recent rightwing sweep of power in Japan. Telling the truth, speaking with humility and showing respect for others is a political liability. Lying about the past, powdering over dangerous mistakes, and whipping up popular support by picking on other nations is a time-tested formula for wrestling political control. It worked in World War Two, and it’s working now. But in the end it fails, because the pressure of the truth eventually finds a way out.

Japan sits on a fault line where tectonic plates collide and heated magma surges upward, but in an odd case of “geo-political” convergence, the art of politics increasingly imitates the flaws of nature. 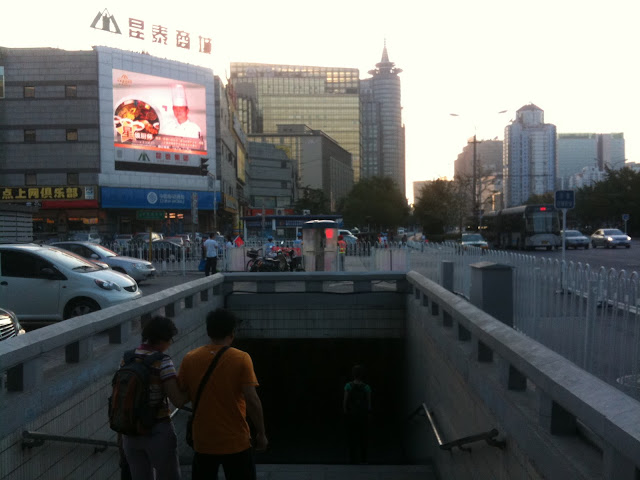 (first published in the South China Morning Post as "Cutting the Fat"  February 25, 2013)

China’s incoming top leader Xi Jinping has signaled the media that he wants to cut back on banquets, but it is too soon to say if this means the anti-corruption campaign of the communist party led is for real, or just a smokescreen for managing public opinion while consolidating power.

Excessive consumption and corruption, especially on the part of state officials who are supposed to be public servants, does make a mockery of the “serve the people” ethos at the heart of good governance. China faces a destabilizing inequality gap, so the waste of public resources on empty gestures — like showy motorcades, honor guards, over-the-top banquets, glitzy hotel receptions and lavish gift-giving — not only squanders funds needed elsewhere, but fuels indignation while eroding social harmony and self-respect.

Despite his revolutionary communist pedigree, it is unlikely that Xi Jinping will be saying “Farewell, my tycoon,” any time soon, though. The get-rich-quick ethos launched by the canny “capitalist roader” Deng Xiaoping is still the default ideology in a nation bereft of meaningful ideology. Fawning over the rich and powerful and dispensing bribes to officials, typically in hope of cementing connections has already become a way of life. Laws that are mercilessly enforced when applied to little people rarely apply to the rich and connected in so-called communist China. The corruption and crony capitalism openly promoted by Deng’s successor, Jiang Zemin, still runs deep, even though Jiang, who, a senior powerbroker and patron of Xi Jinping, has been out of the limelight for a decade.

Putting on aristocratic airs has become so widespread that an everyday act as simple as the sight of US Ambassador to Beijing, Gary Locke, carrying his own bag and buying his own coffee was considered newsworthy in China. Where were his porters and servants?

Cutting back on banquets is an easy mark, but what about the ill-gotten wealth of hundreds of billionaires and millions of millionaires in a poor, developing country with no social safety net?

Cutting back on banquets and the maotai toasts in the military is one thing, but what about restraining dry drunk generals gunning for conflict, high on China’s newfound wealth, arrogance and advanced weaponry?

Toasts offered at lavish Nixon/Mao banquets in the name of US-China friendship in 1972 marked a turning point in diplomatic history. And even the most lavish food and beverage bill would be a bargain if held in conjunction with peace talks between China and Japan, for example, if negotiations could put to rest, or otherwise resolve, the explosive Senkaku/Diaoyudao islet dispute.  Bring on the sake and maotai! Fly in the best sushi and seafood!

Cementing deals over food and making toasts to friendship is an East Asian legacy that runs deep. Even in the 1980s, when China was much less affluent than it is today, and a good deal more egalitarian, being invited for a meal at someone’s home was a grand gesture. The meal might have been cooked on a single-burner hotplate on a busy staircase outside a family’s one-room apartment, but it was always a multi-dish affair, a way of showing generosity and respect.

What started out as a heart-felt gesture may indeed have been corrupted over time, but will a crackdown correct this?

China has a history of swinging from one extreme to another, so even something as simple as a national drive to cut back on banquets needs vigilant monitoring. Is it just a sop to the poor, a showy show of belt-tightening, while the usual rules of a rigged game rigged for the rich apply? Or is it the first shot in a new Cultural Revolution, which will eventually lead to tables being overturned in fancy restaurants and luxury cars flipped and torched by irate crowds?

The tendency for things to swing in China could very well have deep roots in the rise and fall of dynasties over the centuries, but in more recent times, one need not look much further than the wholesale deracination from traditional culture, community and organic growth by decades of divisive and destructive Leninist-style rule.

Whatever the cause for China’s distinct political rhythms; long periods of insufferable status quo, followed by brief revolutionary outbursts, it is the ordinary people who suffer most. Xi Jinping’s populist appeal indirectly acknowledges that there is a problem with hypocritical leaders, greedy tycoons, a politicized bureaucracy and erratic --sometimes negligent, sometimes over-zealous-- application of the law.

There are crackdowns that are empty gestures for show, mere political posturing. Others achieve the opposite of the intended result. Sometimes crackdowns are factional power plays, pandering to public perceptions, while quietly eliminating rivals and consolidating criminal networks. You have greedy leaders calling for law and order even while they contribute to disorder and remain outside the law. You have police instituting crackdowns and curfews even as the children of the rich and connected run continue to run wild and inebriated, bullying anyone who gets in the way, with “do you know who my father is?” And like everywhere, you have silver-tongued politicians who talk the talk but don’t walk the walk.

Experience suggests that anytime a powerful politician, especially one with vast, vested interests, takes to the media and stakes out the high moral ground against one apparent vice or another, one should snap to attention and listen. But don’t judge them by their words; judge them by their actions.