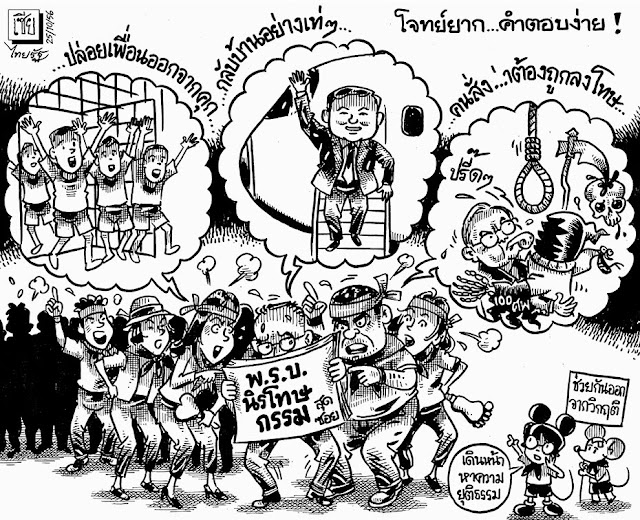 
It's Punch and Judy time!

UK Prime Minister David Cameron famously said  “I’m fed up with the Punch and Judy politics,” but the tradition of comic bickering endures, in Britain and elsewhere, and Thailand’s peripatetic Thaksin is very much part of this tradition.

“Step right up, come one, come all. Welcome to Thailand’s very own Punch and Judy show.”

The puppet character named Punch is based on an ancient Italian prototype for the lord of misrule, Punchinello. The eager British adoption of Punch as one of its own dates to 1662 when the London writer and politician Samuel Pepys observed, with delight, a Covent Garden show put on by an itinerant Italian puppeteer. Punch has since been adopted and modified, freely interpreted in different ways in different times, but as a character he is consistently homely and corny, quick to resort to violence, and almost always preening and ridiculous. In one incarnation or another now, he’s been scheming and bamboozling and entertaining audiences for several centuries, falling in and out of favor like the tides of the sea.

While Thailand has a rich puppet tradition of its own, its modern politicians are globetrotters, prone to pick up foreign innovations and quick to borrow things from abroad. The fugitive former Premier Thaksin Shinawatra, who boasts opulent homes on three continents, including one in London, famously bought and sold Manchester City Football Club. Though Thaksin speaks only halting English and doesn’t seem to “get” the snooty, snobby British values of decorum, self-deprecation and gentlemanly demeanor, but he embodies something close to the hearts of the hoi polloi, something no less essential and quintessentially British, but in an older, earthier way.

He’s Thailand’s answer to Punch, the squawky-voiced, salt of the earth lord of misrule, the wooden-faced troublemaker, the pretender, the trickster who never leaves well enough alone. It’s his way or the highway; “That’s the way I do it” is the refrain.

When Thaksin was Prime Minister, his wife Pojamarn was his Judy, and while any wife is bound to suffer a certain amount of abuse at the hands of a partner with such a big head, Judy is a full-blooded character in her own right and, when the puppeteers are in the mood, she gives as good as she gets.

In traditional Punch and Judy shows, some of the slapstick humor is derived from the way the cackling Punch and Judy neglect their baby who is put through a sausage-machine of abuse by the haplessly distracted parents. The violent plotlines rightly give pause to the politically correct, but perhaps appeal to deeper, darker instincts, like Grimm’s fairy tales and ghost stories told late at night.

Another key character in the Punch and Judy show is the policeman, friend, confidante, joker and rogue, and it’s not much of a stretch to find high-level Thaksin sidekicks who fit the role of jester cop to a “T”

What really keeps the Punch and Judy show going, however, besides the obvious tomfoolery and malapropisms and bad music and the carnival barker who herds the audience into the show in the first place, is the nonstop action and constant distraction that makes an audience feel they’ve been taken for a ride, perchance gotten their money’s worth.

The Punch and Judy show is nothing if not a resilient tradition, but it would not be nearly as resilient as it is if it were not constantly transmogrifying and reinventing itself.  It is still capable of bringing tears of joy, yawns of boredom and shudders of fear to kids of all ages, from nine to ninety two.

Since Thaksin divorced his wife and installed his sister Yingluck as his self-styled proxy and clone, the Thailand Punch and Judy show has undergone some changes in dramatis personae as well. The drama now puts the kid sister front and center for a whole new season of shenanigans, puns, pranks and punch lines.

There is much humor and a bit of stage magic in the way Punch gets the new Judy to do his bidding, as if by remote control. He pops up here, he drops in there, upstaging her, controlling her like a zombie, just when she starts to find her stride.

But there’s a time and place for slapstick (a word derived from the Punch and Judy tradition of characters whacking one another to shake, shock and amuse the audience) and there are times when the punch lines (another term derived from the Punch and Judy tradition) cease to amuse or entertain.  When all the vain preening, artless antics, strutting, squawking madcap smacking gets to be a bit too much, the audience loses interest, the road show closes and the characters are retired until they can be brought back by popular demand.

So step right up, buy your tickets now, for the Punch and Judy show of Thailand.

The third act is in high dudgeon, it’s lively and spirited and full of fun and monkeyshines, but crowds are getting restless the show is rumored to be going bust, so run to see it now while you can.