WHEN GALAXIES COLLIDE, A NEW ERA IS BORN 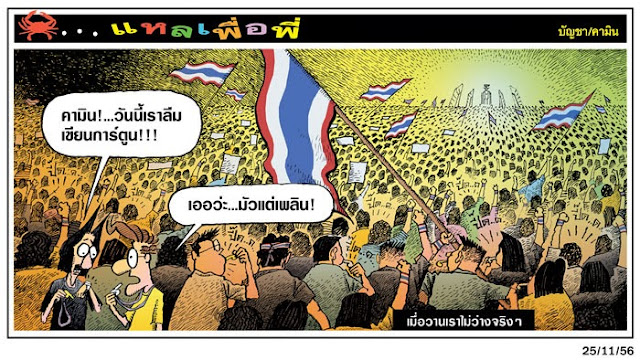 (Cartoon about enjoying peaceful rally by cartoonists Bancha/Khamin,  from Manager)

When galaxies collide, strange things happen. Collisions are not inevitable, there’s a lot of empty space in space, but gravitational waves and tidal forces have a way of reshaping two systems in proximity, creating new alignments and novel groupings. The violent rip and tear of colliding systems can  create something new or precipitate sudden collapse.

Looking at the amorphous, color-tinted crowds assembling, expanding, contracting and regrouping in Bangkok from afar, across the chasm of cyberspace, across the
Twitterverse, one is struck by the overall fluidity and order of the chaos and disorder. Thais on all sides of the color divide are skilled and resourceful protesters and it shows.

This time, it’s not the redshirts who have the upper hand. Instead an eclectic mix drawn from factions blue and yellow, multicolor and no color, have donned tricolor flags and whistles to make themselves seen and heard. To the predations and manipulations of a greedy governing clan they are saying, Stop! Time for a change! Enough is enough!

The hard fact about collective demonstrating is that it is binary by nature; either you are with the crowd or you are not. As part of a crowd, you inevitably experience a loss of agency, like a free-standing star rotating around the black hole at the center of a galaxy.

In clusters of protest as in galaxies there are unwritten physical rules of attraction and repulsion that create order and alignment out of chaos, leaders can be found at the gravitational center, followers in the tails and spiral arms.

Crowds have a way of self-policing, sometimes too harshly, sometimes not enough. Paradoxically, being bound by the unwritten rules of the crowd creates a sense of empowerment that makes it easier to break conventional rules; it’s easier to challenge a police line or takeover a public location when those around you are breaking the same rules at the same time.

Therein lies opportunity for transformative events, therein also lays the danger of otherwise decent people being egged on to do things one knows to be wrong. Self-appointed crowd leaders must keep an ear to the ground even as they reach for the sky. They need to set the tone by humble example, keeping calm and on message. Just as hate speech begets hate speech, non-violence begets non-violence, and small acts of kindness and generosity encourage more of the same.

There’s a time to hold, a time to fold. Cues to action and inaction simmer and circulate through a crowd, nonverbal cues set the mood and keep it cooperative and collective. There’s great strength in unity, until self-preservation comes to the fore, then all bets are off. To walk when others run or run when others walk can rip a crowd apart; patience, harmony and forbearance are key.

People power is powerful because numbers are a force multiplier; citizens who gather in large numbers are vulnerable, yet hard to move, hard to ignore, and hard to predict.

An energized crowd is a harbinger of a paradigm shift, a new galactic alignment that will bring about new constellations of power and new centers of gravity. 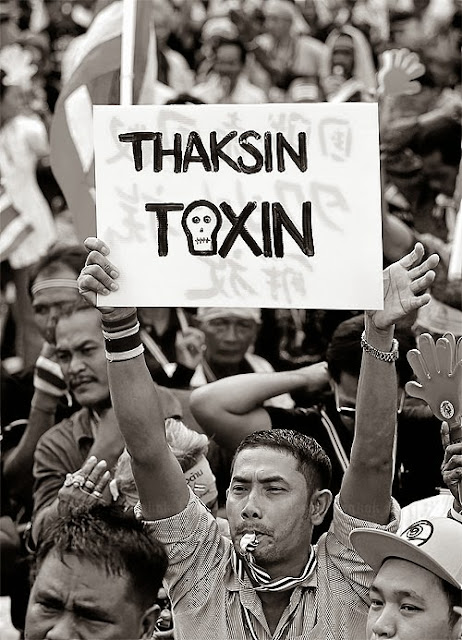 Thai democracy has long been in crisis because it consistently produces undemocratic results and  results in an illiberal consolidation of power. The surreptitious four AM attempt by a partisan faction in parliament to impose an dubious amnesty bill on an unsuspecting public earlier this month is just one example of many. The apparent mastery of democratic form has not been matched by statesmanship that is democratic in spirit.

Surely there is something wrong with a system that allows an ambitious fugitive in Dubai to be the puppet master of parliament, the “remote control” of the prime minister while his clan is the beneficiary of rampant corruption.

Greedy, outsized schemes, whether it be hiking up the price of rice to unsupportable levels to reward regional allies, or unnecessary big-ticket items like high speed trains from China, a cash cow for those who adept at corruption by percentages, only burdens the Thai populace with debt, while increasing indebtedness to him and his corporate cronies.

Thailand is at a turning point, does it want to be truly democratic or not?

To the inevitable cry, if you don’t like the government you can vote them out, I say, nice textbook answer, but things don’t always work out that way. Tell that the frightened and confused Germans of the 1930’s, tell that to the exploited and oppressed Filipinos of the 1970’s, tell that to broken-hearted Americans frustrated with eight years of George W Bush and the war party, who then took part in a once-in-four-years ritual at the polls to chose between Tweedle Dee and Tweedle Dum, with the result that the new man, as different as he appeared to be at first glance, from both his rivals and his predecessors, turned out to push the same policies, only more so, with a continuation of war, a continued reverence for big corporations and a continued servility to Pentagon and powers that be.

What has been happening on the streets of Bangkok is a necessary venting of pent up frustration, an active expression of democratic yearning, an assertion of minority speech coupled the right of assembly. The non-violent guerilla style tactics of taking temporary control of public property recalls the Occupy protests in the US; the spirit of Zucotti Park is alive at Soi Aree today. The classic marches on Ratchdomnern and other iconic centers draws on the heritage the Bangkok demonstrations of the 1970’s, Black May and the mass mobilizations of recent years.

It takes far more courage and commitment to take to the streets and sit-in at a public place under constant threat of harassment and crackdown than it does to drop a ballot in a box. These huge popular demonstrations are a blunt expression of democracy in action, a wishful manifestation of rule of the people by the people.

There is no saying where the current demonstrations will end, or what wrong turns Suthep and his comrades might take, or when tragedy might befall unlucky people in the wrong place at the wrong time when the inevitable crackdown and Thermidor sets in. But the people out there putting their lives on the line are worth listening to, because they are saying things that would otherwise find scant expression in a system dominated by the ruling party.

It’s the voice of the disenfranchised opposition, speaking out, shouting out, trying to alter the fate of a nation that they see as being on a path to ruin.  before they lose their rights altogether. They are taking great personal risks and putting up with considerable discomfort to stop the runaway train of unchecked greed and coordinated power grab. They want their country back, they want fair play, they want to live in dignity, not debt.