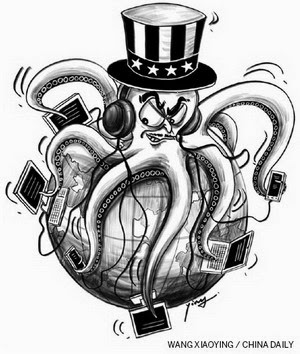 Preventing the information highway from becoming the information spy-way is in the interests of people around the world.
The creeping intrusions of Google, Facebook and other Silicon Valley giants, whose business model is predicated on reading people's e-mails and scanning the intimate lives of others in order to mine metadata for profit, has long been a concern to many. But the extent to which the US government has infiltrated Silicon Valley is only beginning to become clear.
US National Security Agency whistleblower Edward Snowden's revelations about the breathtaking scale of US government spying and the murky but documented collusion between intelligence agencies and the Silicon Valley signal a paradigm shift in public awareness. The spying and snooping is not just about ad clicks and crass commercialism, it's a political onslaught, an assault on civil liberties and an affront on human rights around the globe.
The National Security Agency has an insatiable appetite for other people's data, especially foreigners. Why else would former US secretary of state Hillary Clinton sully her diplomatic efforts with a crusade to make the world safe for Facebook? Why else did US supremacists and their fellow travelers and useful fools in the tech industry cry for Google when it stumbled in China? It was a fool's errand and it failed. China was, and remains, fully within its rights as a sovereign nation to say, "Get out, Google, take a walk, Facebook, we don't want any Trojan horses here."
When it comes to spying on US citizens, the NSA, offers a tiny fig-leaf of legal protection called the Foreign Intelligence Surveillance Court, although it still collects their private information anyway, for future reference. But the NSA doesn't even pretend to care about the privacy rights of the other 95 percent of the world's population. It's open season on all non-US citizens all the time.
The democratic ideals of the US' founding fathers are something to be proud of, but there's nothing to be proud of in this brave new world of spying, secrecy and skullduggery.
US President Barack Obama, who is proving to be an enabler of an out-of-control security state, has done nothing in his five years as president to restrict or reign in the spying juggernaut. If anything, he has done the opposite and accelerated the erosion of privacy rights and civil liberties.
Remember how US contractors bugged China's presidential jet in 2002? It seems so redundant and low-tech compared to the panopticon snooping capabilities of the present. Still, it would be hard to blame Chinese customs inspectors should they want to carefully examine the souvenir pine bench bestowed upon the Chinese president by his American counterpart at Sunnylands just in case there are any unusual "knots" in it.
The US government's pretension to the moral high ground has been obliterated by the dynamite revelation that the US is running the biggest spy operation in the history of the world without adequate safeguards, accountability or any respect for privacy and civil rights.
What kind of human rights-minded government thinks it's okay to submit its people and others to the unblinking X-ray gaze of computer-enhanced espionage around the clock? What kind of democratic government colludes with big business to collect as much data as it can on its citizens, and the citizens of other countries, and then use and abuse that data under a cloak of secrecy?
The US and China are hurtling down the information highway at breakneck speed. New rules of the road need to be established for the protection of all. World peace and prosperity depend on it. That's why both sides need to work on a new narrative, not only one that accords equal respect to both parties, but one that accords profound respect to their respective citizens. Both countries have formidable security systems and advanced computer resources. It is the responsibility of both countries to balance freedom and security in a way that keeps the peace while protecting citizens' rights and human dignity.
on June 18, 2013