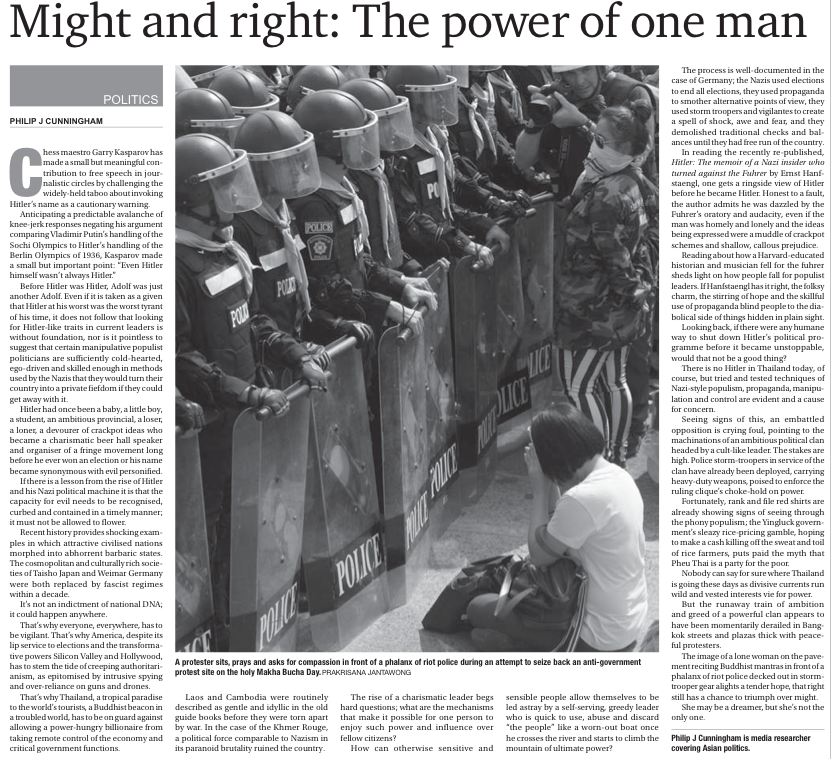 Chess maestro Garry Kasparov has made a small but meaningful contribution to free speech in journalistic circles by challenging the widely-held taboo about invoking Hitler’s name as a cautionary warning.

Anticipating a predictable avalanche of knee-jerk responses negating his argument comparing Putin’s handling of the Sochi Olympics to Hitler’s handling of the Berlin Olympics of 1936, Kasparov made a small but important point: “even Hitler himself wasn’t always Hitler.”

Before Hitler was Hitler, Adolf was just another Adolf. Even if it is taken as a given that Hitler at his worst was the worst tyrant of his time, it does not follow that looking for Hitler-like traits in current leaders is without foundation, nor is it pointless to suggest that certain manipulative populist politicians are sufficiently cold-hearted, ego-driven and skilled enough in methods used by the Nazis that they would turn their country into a private fiefdom if they could get away with it.

Hitler had once been a baby, a little boy, a student, an ambitious provincial, a loser, a loner, a devourer of crackpot ideas who became a charismatic beer hall speaker and organizer of a fringe movement long before he ever won an election or his name became synonymous with evil personified.

If there is a lesson from the rise of Hitler and his Nazi political machine it is that evil needs to be recognized, curbed and contained in a timely manner; it must not be allowed to flower.

Recent history provides shocking examples where an attractive civilized nation morphed into an abhorrent barbaric state in a few short years. The cosmopolitan and culturally rich societies of Taisho Japan and Weimar Germany were both replaced by fascist regimes within a decade.

It’s not an indictment of national DNA; it could happen anywhere.

That’s why everyone, everywhere, has to be vigilant. That’s why America, despite its lip service to elections and the transformative powers Silicon Valley and Hollywood, has to stem the tide of creeping authoritarianism, as epitomized by intrusive spying and over-reliance on guns and drones.

That’s why Thailand, a tropical paradise to the world’s tourists, a Buddhist beacon in a troubled world, has to be on guard against allowing a power-hungry billionaire from taking remote control of the economy and critical government functions.

Laos and Cambodia were routinely described as gentle and idyllic in the old guide books, saw social collapse, and in the case of the Khmer Rouge, the emergence of a political force comparable to Nazism in its paranoid brutality.

The rise of a charismatic leader begs hard questions; what are the mechanisms that make it possible for one person to enjoy such power and influence over fellow citizens?  How can otherwise sensitive and sensible people allow themselves to be led astray by a self-serving, greedy leader who is quick to use, abuse and discard “the people” like a worn-out boat once he crosses the river and starts to climb the mountain of penultimate power?

The process is well-documented in the case of Germany; the Nazis used elections to end all elections, they used propaganda to smother alternative points of view, they used storm troopers and vigilantes to create a spell of shock, awe and fear, and they demolished traditional checks and balances until they had free run of the country.

In reading the recently re-published, “Hitler: The Memoir of a Nazi Insider Who Turned Against the Fuhrer” by Ernst Hanfstaengl, one gets a ringside view of Hitler before he became Hitler. Honest to a fault, the author admits he was dazzled by the Fuhrer’s oratory and audacity, even if the man was homely and lonely and the ideas being expressed were a muddle of crackpot schemes and shallow, callous prejudice.

Reading about how a Harvard-educated historian and musician fell for the Fuhrer sheds light on how people fall for populist leaders. If Hanfstaengl has it right, the folksy charm, the stirring of hope and the skillful use of propaganda blinded people to the diabolical side of things that were hidden in plain sight.

Looking back, if there were any humane way to shutdown Hitler’s political program before it became unstoppable, would that not be a good thing?

There is no Hitler in Thailand today, of course, but tried and tested techniques of Nazi-style populism, propaganda, manipulation and control are evident and cause for concern.

Seeing signs of this, an embattled opposition is crying foul, pointing to the machinations of an ambitious political clan headed by a cult-like leader. The stakes are high. Police storm-troopers in service of the clan have already been deployed, carrying heavy-duty weapons, poised to enforce the ruling clique’s chokehold on power.

Fortunately, rank and file red shirts are already showing signs of seeing through the phony populism; the Yingluck government’s sleazy rice-pricing gamble, hoping to make a cash killing off the sweat and toil of rice farmers puts paid the myth that Pheu Thai is a party for the poor.

Nobody can say for sure where Thailand is going these days as divisive currents run wild and vested interests vie for power.

But the runaway train of ambition and greed of a powerful clan appears to have been momentarily derailed in Bangkok streets and plazas thick with peaceful protesters.

The image of a lone woman on the pavement reciting Buddhist mantras in front of a phalanx of riot police decked out in storm-trooper gear alights a tender hope, that right still has a chance to triumph over might.

She may be a dreamer, but she’s not the only one. 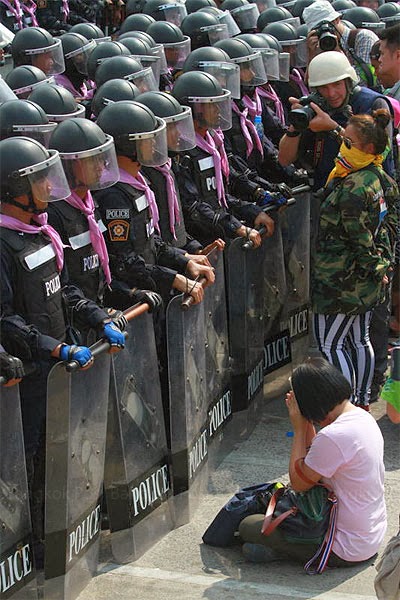 THAKSIN AND HIS QUEST: LOOKING FOR ROSEBUD

I first wrote about Thaksin's quest for power in the South China Morning Post, is based on the June 4, 2001 meeting between newly-elected Thaksin Shinawatra and the press at a gala FCCT sponsored event held in the Plaza Athenee Hotel in Bangkok. It took place in the honeymoon period of Thaksin's tenure as Prime Minister, when nearly everyone was willing to give the new prime minister the benefit of the doubt. As positive as the overall tone of this brief profile might be, it was quickly criticized for being too harsh on the new wunderkind called Thaksin. "We support him, be careful," one of the heroes of October 14 told me, pointing out that several former members of the Communist Party of Thailand were now avid Thaksin supporters. I didn't understand how anyone who once fancied himself an idealist and a communist could support a billionaire then, and I still don't understand it now.

Looking back, it is fair to say I too under-estimated Thaksin's capacity for deception and destruction. He had only been prime minister a few months, and had yet to launch his diabolical "war on drugs." He had yet to engage in clumsy and deadly meddling in the sensitive south of Thailand, resulting in massacres and a flare-up in violence that continues to this day.


In June 2001 he enjoyed generally good press, and he had yet to buy, threaten, cajole or terrify Thailand's feisty, vigorous and free Thai-language press into political submission, although even this article indicates there were already some clouds on the horizon with the Shinawatra takeover of iTV. Created to be a voice independent of government, it was an obvious conflict of interest for the Prime Minister's family to buy a controlling interest in the TV station. It's also interesting to note that even before declaring his infamous war on drugs, which is thought to have killed some 2,500 Thai citizens, many by extrajudicial road-side killings, Thaksin already showed a willingness to make a show of killing for political effect, in this case, expediting the execution of four convicted drug dealers after a long moratorium on imposing the death penalty for such crimes.

I conversed with Thaksin in Thai after the talk, joining him at the table where he sat with Rodney Tasker, one of four journalists he would later attempt to deport on trumped up lese majeste charges. He seemed likeable enough, keen to find a way to bring me on board, to join his crusade, but I showed no interest in that. Instead, I pressed Thailand's real life answer to Hollywood's Citizen Kane on why he persisted in seeking power when he had so much wealth and power already. He seemed taken aback by the question, suggesting perhaps even he didn't know why he did what he did, and even today I suspect he still doesn't know why he does what he does.


When Thaksin regained his composure after a moment's pause, he switched from Thai to English, and used a single word to explain his quest.

"Commitment," he said. "It is my commitment."

And until the troubled tycoon finds his Rosebud, I suppose we will have to take his word for it.