YANG RUI: A DAY AT CCTV 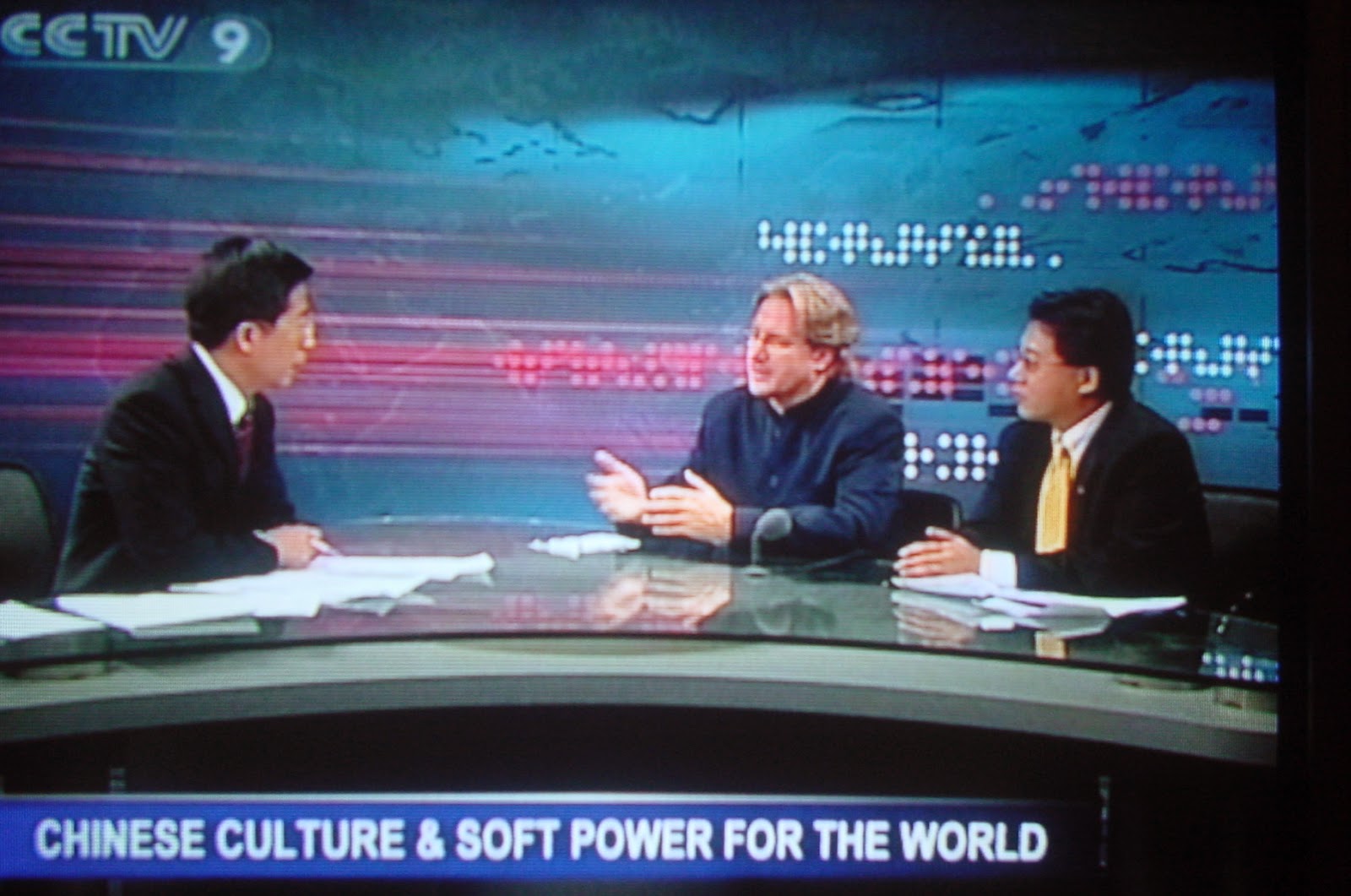 Sometimes it seems like the whole world is against you, you’re getting hit from all sides. American bloggers dismiss you as a mouthpiece for China; Chinese officials carp about your “intrusive questions”, saying you’re too aggressive, too “Western.” A diplomat from a Muslim country is pressuring the Foreign Ministry to have you fired for overly critical remarks, and there were pointed complaints from Africa, where the program is widely broadcast, when you compared the situation in Sudan to Rwanda and Timor.  Israelis and Arabs, Indians and Pakistanis, Iraqis and Turks each accuse you of favoring their rivals. Doing your job well means someone, somewhere will not be pleased.

You pull yourself out of bed before dawn, gulp down a cup of milk, and then select a suit, shirt and tie. You have a lengthy live broadcast to anchor starting nine AM. You flick on the TV to review last night’s show as it is rebroadcast, and then boot up the computer to see how the world's changed overnight. If it weren’t for the day’s hectic schedule, you might like to spend the morning in the book-lined study listening to classical music. But North Korea is in the news, the Six-Party talks, a volatile discussion concerning denuclearization of the Korean peninsula are the topic of today’s special show. In haste, you take the elevator down to the cavernous basement garage of the modern apartment block you live in, key open the door of your car and commence your drive to work. Rush hour is in full force. With your mind on global affairs, you negotiate the bicycle clogged highways and by-ways of West Beijing, mindful of over-loaded trucks, errant cyclists and the odd donkey-cart.

You pause at the entrance gate to CCTV’s headquarters, there are no disgruntled rural petitioners assembled here this morning, slowing down long enough for the uniformed guard to give you a crisp, perfunctory salute. You luck out, securing your favorite parking space on a neglected piece of blacktop behind the East Gate guardhouse.  You walk a short distance to the main entrance where you are brusquely waved in by a muscular man in a khaki uniform, then take the elevator up to your office on the nineteenth floor. You sift through memos, lead-ins and research prepared by your staff, then whiz through the Western wires starting with Reuters, scanning the NYT, sina.com, sohu.com and the New York Times online. What an enviable information flow, what a beautiful world the Internet is for the reader of English.

You gaze out the window at the postcard-perfect vista of Yu Yuantan, imperial Qing garden turned people’s park, now illuminated in the oblique light of the rising sun. To the east, the articulated rooftops of Soviet style towers and grandiose bank buildings line the city’s main thoroughfare. Beyond the chimney-shaped television tower capped with a revolving observation deck, a golden mist hangs over the Fragrant Hills.

Today's show, due to go on live in half an hour, has three guests; the former Japanese Ambassador to Russia, a local Arms Control expert from the Academy of Social Sciences and an American journalist. You're a little nervous about the ambassador because recent tensions between Tokyo and Beijing have put things on edge. On the one hand you want to ask tough questions, it’s your practice, it’s your pride, it’s what you do to create a circumscribed, propaganda-free zone; on the other hand you have to keep things diplomatic. A major issue of war and peace --will North Korea go nuclear, inviting attack from the US and Japan, or will it be persuaded to give up its atomic activities?

While on any given day it is difficult to determine who or how many of the estimated ten million potential satellite viewers in China and abroad are tuning in to the show that you script with your own hand and enliven with your off-the-cuff comments, one thing you can be sure of; Dialogue is monitored daily by Beijing-based diplomats, the Foreign Ministry and various state security agencies.

You check your appearance in the mirror as you knot your tie and take the elevator back downstairs, ambling down the long corridors of CCTV’s aging modernist structure, where discarded lunch boxes and drink bottles litter long, curving hallways and some of the floorboards creak. Although the recently renovated studio for live broadcasts sparkles, building repairs are made only reluctantly now that the all available funds are being poured into the gargantuan new CCTV tower designed by the flashy Dutch architect Rem Koolhaas.

You briskly stride the length of the second floor to get to the English language newsroom where bilingual Chinese staffers and foreign experts assemble and polish news scripts for the day’s bulletins, mostly international news, sometimes with a China angle.  Wall-mounted TV screens simultaneously display half a dozen news programs, including BBC, banned from most Chinese cable providers in China, but an indispensable part of your daily fare as a newsman.

You are shepherded to the make-up room for a quick hair check and a touch of color and powder. Then you are quietly ushered into the oval-shaped live studio next door, silently slipping into your seat and putting in your earphone as another live news update winds up on the other side of the room. Your guests arrive, after handshakes you seat them according to protocol, the Chinese arms expert sitting closest to you, the Japanese ambassador in the middle and the American journalist at the end of the table.

The lights come on, and all conversations cease. An illuminated clock counts down silently.  "Hello this is Yang Rui, and welcome to Dialogue..."

We’re sitting at a wooden table in a trendy Tex-Mex restaurant in the diplomatic district. Yang Rui is relaxed and smiling, talking serious politics even as we order lunch. He tells me how much he enjoys doing live shows, and it’s not just the extra adrenaline and excitement. With live TV, there is no editing, no second-guessing the comments made by hosts or guests, you just have to go with what happens.

Taped interviews, on the other hand, are vexing because they invite endless edits and outside meddling. He talks about how the Foreign Ministry once expressed concerns about the pointed questions he asked Zimbabwe strongman Robert Mugabe who was visiting Beijing as a state guest.  Despite the pressures of protocol, Yang Rui had insisted on asking about the “old friend of China” about controversial shantytown demolitions, even though he was pretty sure it would be censored out.  He was criticized by an aide to Mugabe at the time, so it was to gratifying to see that the interview aired pretty much intact, as best he remembered it.

He found US government guests could be equally prickly about content and protocol. During an interview with US Labor Secretary Elaine Chao, US minders blocked the camera and demanded that the line of questioning be halted because it deviated from a pre-arranged script. Similarly, when Alberto Gonzalez, as US Attorney General, sat for an interview at the US Embassy in Beijing, Yang Rui reported being bullied by aides to the Attorney General who tried to control every aspect of the interview, from questions to seating arrangements and placement of national flags.

And of course there are political sensitivities much closer to home.  Yang Rui explains, with a note of exasperation, that Chinese television is at risk of going from political propaganda to commercial propaganda, in effect making the move from mouthpiece to mouthwash.  As the long hand of the state recedes, it yields not so much to serious journalism, such as he would like to see, but bottom-line driven commercial product. He quotes a former CCTV colleague, the Columbia-educated television hostess and media entrepreneur Yang Lan who complained to him about the low-brow pressures of independent television production, nostalgically recalling the “freedom” she enjoyed of being able to talk about serious issues on state-run CCTV.

“China wants to be seen as a serious, responsible player,” explains Yang Rui, “and that requires producing balanced news and winning the trust of the viewer.”

The American invasion of Iraq was a big turning point for CCTV, Yang Rui continues. “That’s when we really started doing journalism. We ran live reports, we quoted foreign sources, we had PLA generals talking military strategy. The head of the news division was so nervous, expecting at any moment to be criticized by the national leadership.” The complaint never came.  “They liked it; it was the Americans who complained,” he adds with a grin.

Yang Rui says self-censorship is much more insidious than formal controls; a willingness to take risks should be part of the news sub-culture at a TV station. During orientation, new recruits are admonished; “be willing to be casualties.” The challenge is to do your job well, even if it means losing your job.” During the weekly two-hour meeting he chairs for the youthful, largely female staff of seven producers and assistants, Yang Rui challenges the innate caution and “one-day, one-dollar” attitude of today’s youth. “I see journalism as a noble cause, a mission; too many others see it just as a job.”

I meet Yang many times again in and out of the studio. An American professor in Japan, I am frequently asked to comment on Sino-Japan relations, both in the studio and by telephone hook-up. We meet later at a trendy café in the university district where he is recognized by several students who watch his program to improve their English.

What are some of the memorable interviews has he dealt with? “Ah, Margaret Thatcher!” he says, conjuring up a smile. “What a skilled actress! She was unshakeable.” Michael Deaver, former Reagan aide, was challenging in a different way, “He didn’t answer any of my questions!” He mentions that several Chinese officials similarly proved difficult subjects, they didn’t like being interrupted or asked follow-up questions, tending to treat journalist as scribe. On the other hand, he thoroughly enjoyed repeated interviews with Jimmy Carter, “an honest and smart man” and Chris Patten, “he is tough, his words so strong, he has the instincts of a wolf, but I enjoy talking to him.”

Although Yang Rui still has days when doing what a journalist is supposed to due puts him under pressure, his supervisors can’t help but notice that Yang Rui has cultivated a long line of diplomats, scholars and statesmen willing to sit in the hot seat as a guest on his show. Now with the Olympics coming up, he will be busier than ever.

“Sometimes I think it’s amazing I still have my job,” he confesses over coffee. “What a job!”