China is rising, peacefully for the most part, but there's been considerable muscle flexing and elbow-bumping between China and Japan in recent months. No longer does the Deng Xiaoping maxim of keeping a low profile and biding one's time seem to apply. The profile is high and the time is now.
A glimpse of how the brass new China views itself in the world can be gleaned from the increasingly strident, orthodox tone of state run television. Nationalism is increasingly worn on the sleeve, or in the case of newscasters and spokesmen, in the form of China flag lapel pins.
Consider “Midnight News” the first broadcast of the day on CCTV's "Xinwen" channel, China's answer to CNN. The round-the-clock news service begins its May 30, 2014 news coverage of the world with a series of strident reports about Japan. The program opens with a troubling report about how Japanese pilots have been engaged in provocative behavior threatening the legitimate passage of Chinese aircraft on the high seas.
The neatly groomed announcer points out that China has been acting with restraint and very much within in its right, conducting a legitimate air-sea drill in the sea off its shores. The first bulletin of the day goes on to accuse Japan of a series of "irresponsible and dangerous maneuvers," including the twin incidents of May 24 in which a Chinese jet came within 50 meters of a Japanese surveillance plane, and cites another case in which a "Japanese warplane" came within 30 meters of a Chinese jet, iIlustrated with stock footage of the aircraft in question, The report states that Japan’s outrageous provocation is only the latest in a series of "deliberate close encounters" inside China's "Air Defense Identification Zone." 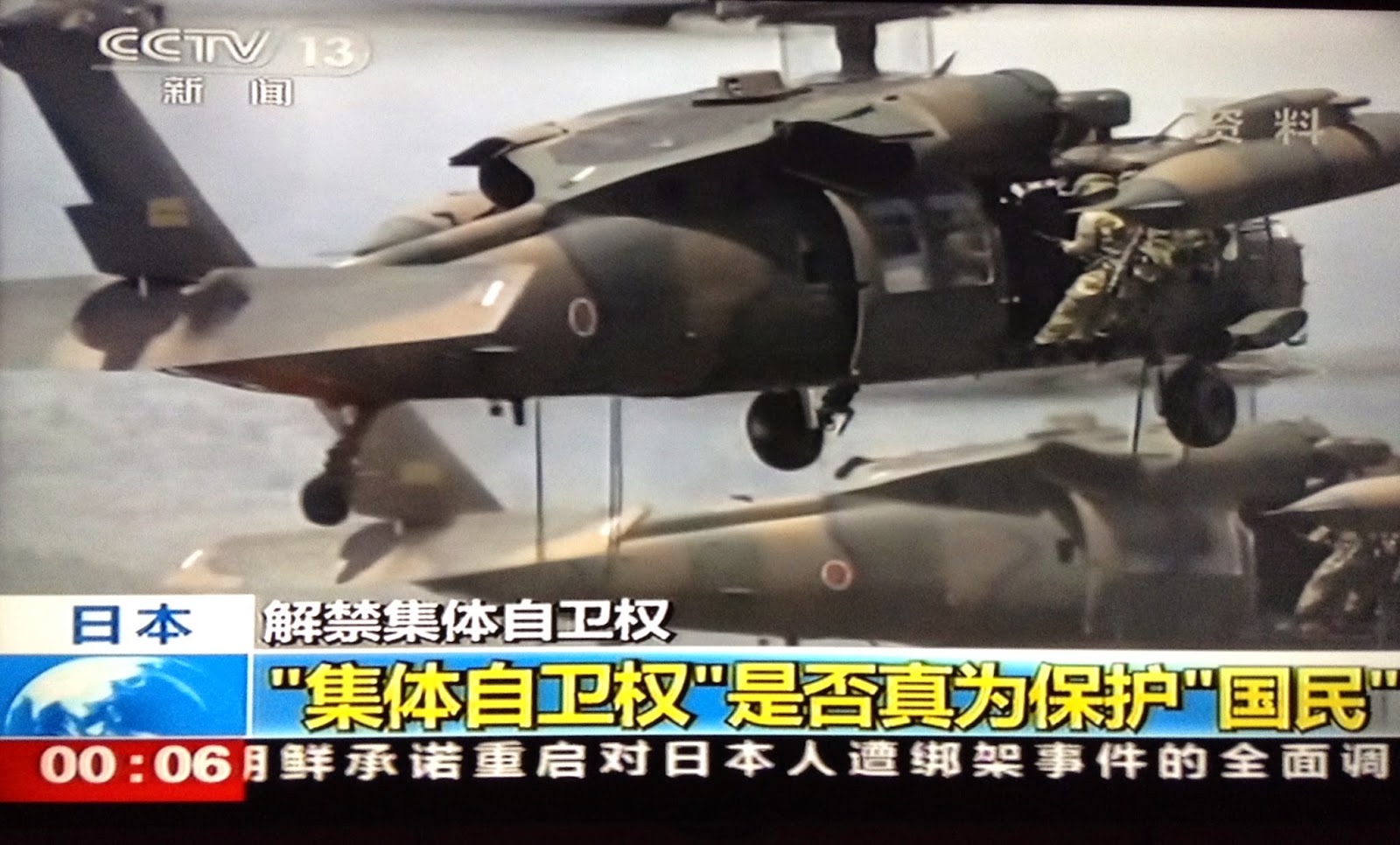 As if the danger of collision, inadvertent or otherwise, weren’t obvious enough, the report brings up a previously undisclosed case dated months earlier in which saw two aircraft come within ten meters of each other, a hair’s breath in aviation terms. The report suggests it was all Japan's fault, as China was engaged in professional operations conforming to policy and regulations. China scrambled its jets for identification in accord with internationally accepted practices.  A repeating loop of file footage showing Chinese and Japanese aircraft doing maneuvers in flight adds drama to the breaking news story. 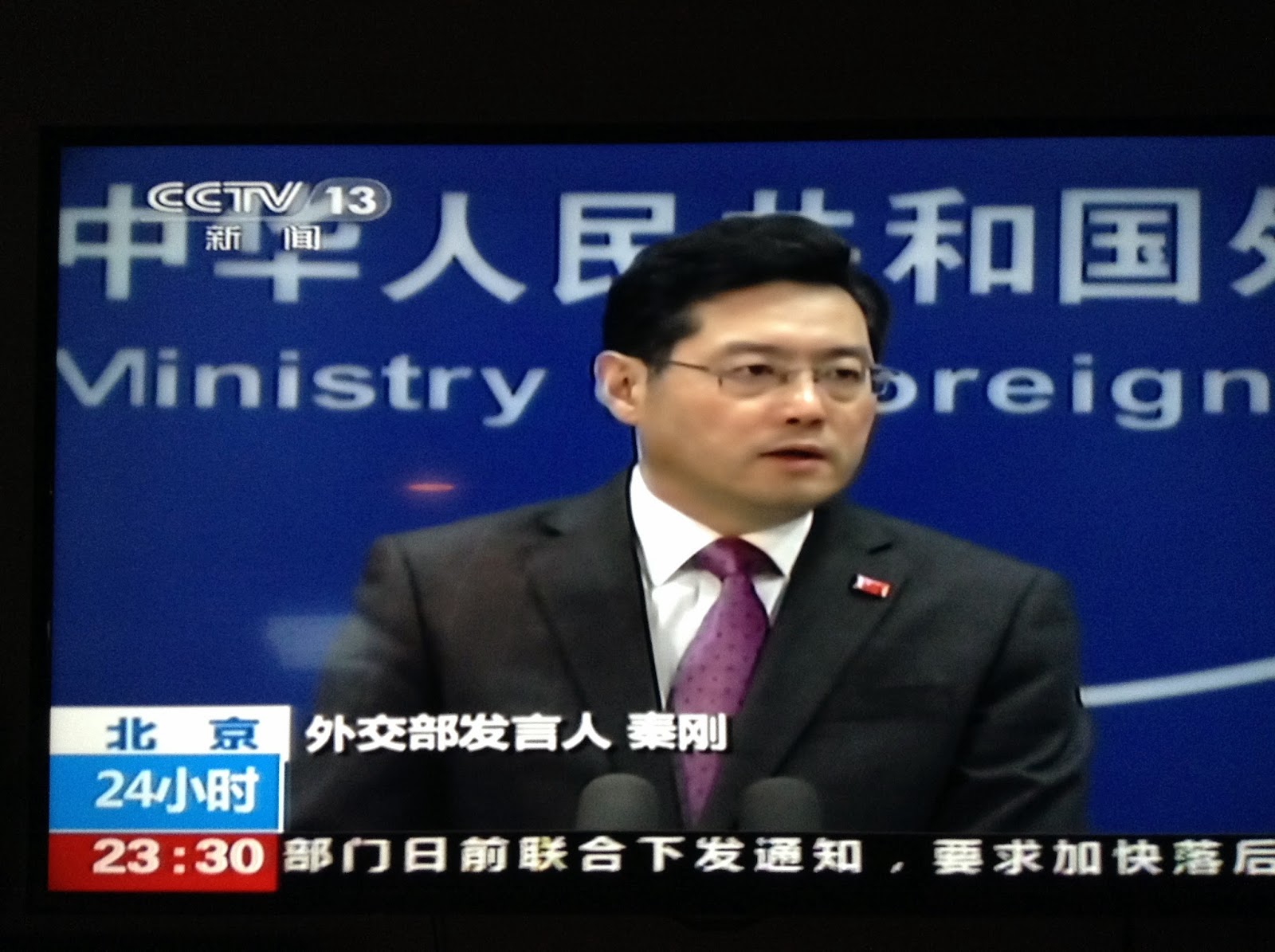 This hot lead is followed by an indignant piece of analysis about how Japan Prime Minister Abe is single-handedly trying to change collective self-defense to allow Japan a more aggressive international role. China's smooth and unruffled Foreign Ministry spokesman, Qin Gang, wearing a red flag pin on his lapel, denounces "An-be" as the Japanese prime minister is called in Chinese, in plain, no-nonsense terms that suggest a fit of diplomatic pique. The accompanying images of the Japanese Prime Minister, though drawn from file footage, do not show to his advantage.
The Beijing-based chastisement of Abe is followed up by a satellite link report with a CCTV reporter in Tokyo who interviews a Japan antiwar activist whose position happens to hew close to the Chinese one. The cursory vox populi is aired in the original Japanese, translated with subtitles. The Tokyo report then cuts to a news clip of a small but lively Japan demonstration against Abe's unwarranted shift in policy, which is evidence, CCTV concludes, that among Japanese ordinary people, (minjian) there is opposition to Abe’s proposed changes. 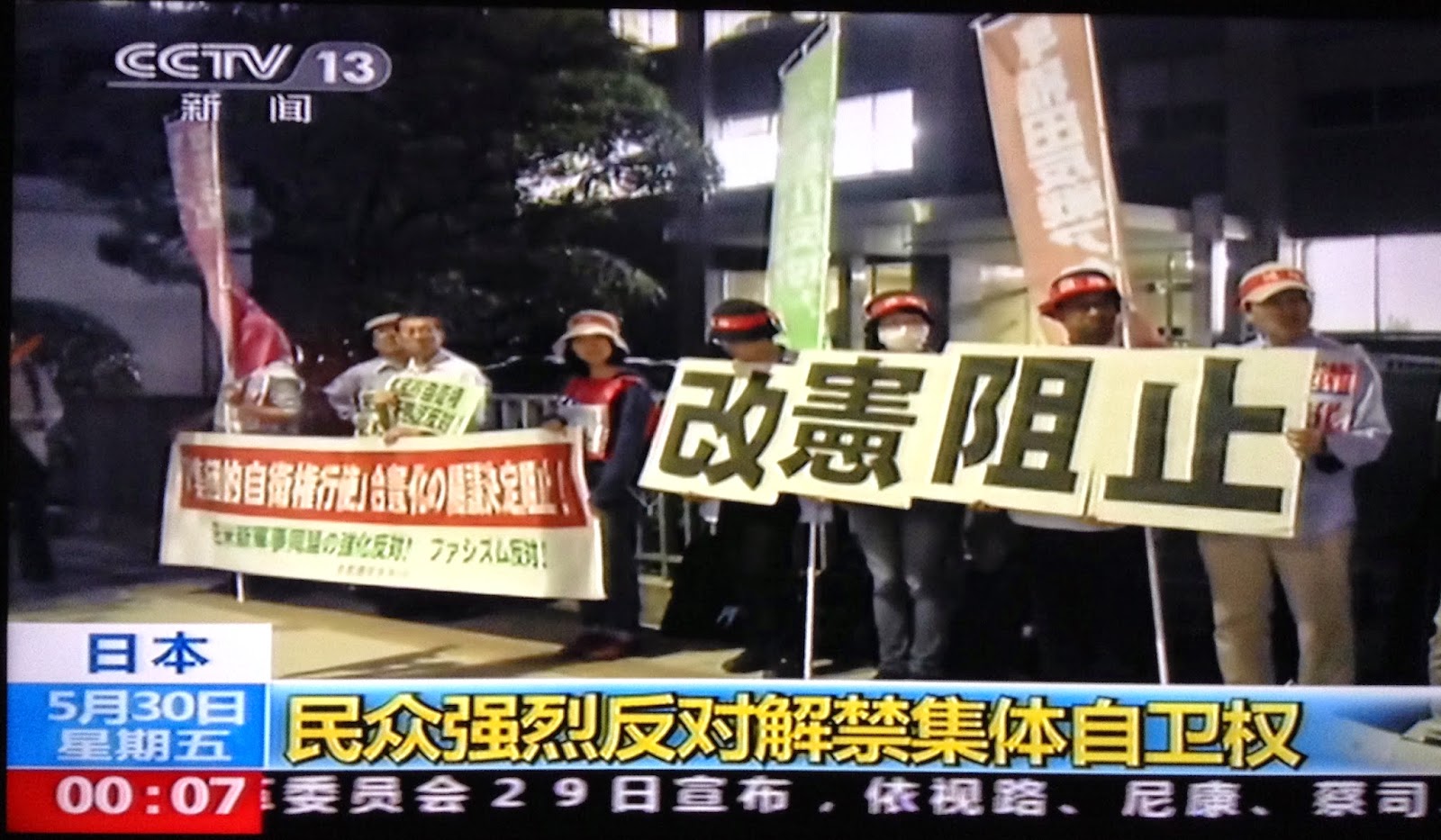 The two lead stories with a focus on bad news about Japan have now run nearly ten minutes, an eternity in news time. As if to capture the flagging attention of the late night viewer or random channel surfer, the news puts an emphasis on striking visuals and arresting catch copy. The just aired pieces cut from the narrator to show a series of bombs and jets and Top Gun maneuvers drawn from impressive TV file footage of Japan’s Self-Defense Forces exercises. The Japanese Hinomaru flag, and its likeness as an insignia on jets, planes and ships, is displayed prominently in many shots.
The virtual war scenes, stitched together from innocuous footage and the TV producer’s imagination, are followed by actual horror of war scenes as the first news report of the day turns other big stories of the day. The youthful, well-groomed announcer turns his attention to Ukraine, where wire services footage of bombings, fleeing civilians and wanton destruction on the ground offer a harrowing, unglamorous counterpoint to the slick illustrated theatrics of Sino-Japanese tensions in the previous segment.
The next story in the top of the hour lineup features Edward Snowden, talking to NBC reporter Brian Williams in Moscow. It includes a subtitled clip of Snowden explaining in English how your phone can be turned on remote, how people can be hurt by unwanted electronic intrusion and unfair profiles based on metadata
Next up is a brief pro-Russia PR segment about how Russia is strengthening its good relationship with former Soviet states of Kazakhstan and Byelorussia. This glowing coverage is in tune with over two weeks of positive coverage and optimistic pronouncements reflecting an upswing of mutual admiration dating to the Shanghai Confidence Building Conference that was boosted by the attendance of the image-conscious leader Vladimir Putin, who enjoys considerable popularity in China.
The report makes note of a prospective Sino-Russian pipeline and gas deal worth hundreds of billions of dollars, a possible game-changer in global energy fortunes, and The pro-Russian reportage caps off a news cycle that has been demonstrably favorable to Russia, with a segment about the joint Sino-Russian naval exercises recently held in the South China Sea, and serves as a geopolitical context for the opening report on the aerial near-miss with Japan.
A final tidbit of Japan news is presented, again showing pictures of Abe, saying Japan will ease sanctions in return for more cooperation in finding evidence of Japanese kidnapped citizens in North Korea. The subtle uptick in Japan-North Korean relations in the context of a broader honeymoon between China and Russia suggests a departure from the Cold War alignments, but the Cold War norm of a world divided into camps still seems to apply. China-North Korea relations have cooled sufficiently, and Japan’s foreign policy moves have been met with sufficient official outrage and skepticism to leave doubt in the mind of the viewer about the true intentions of Japan’s delicate rapprochement with its long-time bete noir, North Korea.
The Xinwentai’s Midnight News report on the state of the world of is followed by a few short clips of domestic developments in China, making it an almost exact reverse of the flagship nightly news at seven, Xinwenlianbo, which is almost entirely focused on domestic news, with a just a few minutes to cover the rest of the world at the end of the program.
There’s a report about the record-breaking heat wave scorching Beijing and many parts of the country.
Next is a cultural item about fabled Chinese writer Qian Zhongshu, whose magisterial novel "Fortress Besieged" describes China during the time of Japanese invasion. Qian's extensive foreign language notes and manuscripts have been published. The midnight news program closes with a series of brief clips touching on transportation, including China's ever-expanding high-speed train network, regulations for truckers, a clip of Google's driverless car and some stunning footage from the Kazakhstan launch of the Soyuz spacecraft, shown at liftoff and docking with the International Space Station.
The closing bumper, with its feel-good good-news of advances in transportation, is of a piece with China’s hunger for new technology and visionary, if not slightly insane, projects like building a high-speed train line from China to Alaska via Siberia, an alternative to the Panama Canal in Nicaragua, and planned moon shots. As has been the case with already executed mega projects such as the Three Gorges Dam, which is silted and near capacity, new pipelines and a rapidly expanding high-speed rail network, short shrift is given to environmental worries and the downside of development.