THE ART OF DRAWING LINES AND CROSSING THEM 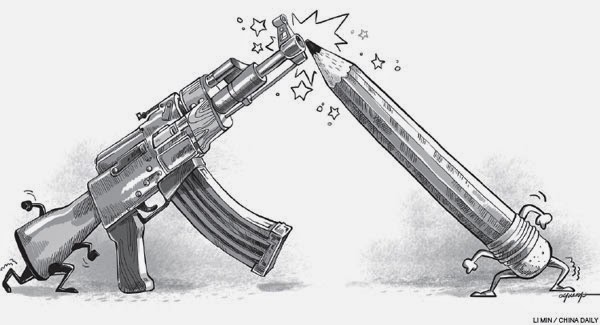 The bloody attacks on French cartoonists have the Western media talking about press freedom, but the hail of bullets that cut down innocent lives in Paris is about much more than that.
The shootings were a pointedly political attack, a premeditated sneak attack, a dagger in the heart of Marianne, an assault not just on a tradition of liberty, but reason and civilization itself.
It is perhaps inevitable that early reactions to the shock should be self-reflective: What does this mean for freedom of speech in France? What does it mean for the future of political satire? If a red line was crossed editorially, is the right response to pull back, or double down, asserting the right to offend? All of these are important questions, and while it seems everyone has an opinion on the matter, there are few easy answers.
So it's natural for the press to react, perhaps even over-react when fellow members of the pen-wielding tribe get hit, especially when it takes place in a fabled city that gave the world "Miss Liberty", or at least a statue by that name, which now stands holding a torch in New York Harbor.
To frame the attack as a freedom of the press issue is to box it off and isolate it from the horrors committed by like-minded cold-blooded operatives who seek to destroy civic society on a far greater magnitude in places like Iraq, Syria and the borderlands of the Sahara desert, such as northern Nigeria, where horrific assaults have taken place in the name of "books are bad" Boko Haram.
In the West, there's been a rush to defend the right to offend at any cost, though it was European rather than US newspapers that were at the vanguard of reprinting the cartoons, given the US' penchant for political correctness on questions where certain forms of racism or religion might be at play.