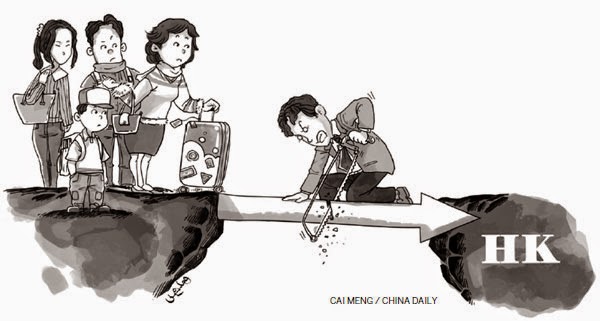 When I worked as a tour guide in the early 1980s, the standard China tour started in Hong Kong and ended in Beijing. Hong Kong, which was a bustling British colony at the time, was the starting point for much-coveted visits to the mainland that was just beginning to open to the outside world.
In those days, the bulk of tourists were from the United States and Europe; there were few Asians on the road other than Japan tours and individual travelers from Hong Kong. For those of us keen on seeing the "real" China and traveling far and wide, Hong Kong travelers were to be envied.
With their huixiangzheng, or "Home Return Permit" they could travel without a passport or visa and use a wider range of facilities and eateries than were available to foreign visitors. The inexpensive renminbi economy was beyond the grasp of most tourists, though resourceful foreign students often found ways to get around this.
It was a golden age for Hong Kong travelers, both in terms of being warmly received in the mainland as compatriots, and in economic terms when it came to stretching money, scoring deals and shopping. Relatives were rewarded, friendships were made and ideas were exchanged.
Fast-forward to the present moment and it's a different world. Hong Kong no longer looms as the mythical "Emerald City" in the Chinese imagination and the wealth differential is gone. Now Hong Kong is an integral part of China under the "One Country, Two Systems" policy and the mainland has become rich and prosperous.


Every generation produces its loud, obnoxious tourists with money to burn. The problem with current spate of tourist tensions between Hong Kong and the mainland is not one of character or cultural difference - but rather more the discomfort of the shoe being on the other foot. The easy, breezy, condescension Hong Kongers once might have felt towards their impoverished kith and kin on the mainland is hard to uphold in the face of so many people with so much money.
China is producing newly wealthy people faster and in greater numbers than anywhere. It's not the whole story, many people in China continue to work hard and live by frugal means, but with even a small fraction of a billion people traveling, toes are naturally going to be stepped on. It is natural and to some extent unavoidable that tourism should create a miscellany of mishaps and culturally incorrect behavior, because tourists, almost by definition, are ignorant about the places they are visiting.
Awkward intercultural interactions are something that all tourist destinations learn to deal with, and in places like Thailand, tourist-handling has been elevated to a high art, steadily developed over many decades.
Those valuable "teaching moments" that every good traveler learns to expect and cherish, the moment when an unsuspecting stranger in a strange land is gently shown or explained the local way of doing things is not possible when tourists travel in huge groups and arrive in large numbers.
In the case of outbound travel from the Chinese mainland, the sheer volume of traffic in the sudden upswing in Chinese provincials traveling abroad is a flood, not a trickle, and as such is harder to handle with aplomb. The hotels, airlines, resorts, shops, and restaurants that profit most from tourism need to keep their own greed in check lest they take in more than can be comfortably handled in a way that is mutually beneficial to tourist and host alike.
The author is a media researcher covering Asian politics.
on February 26, 2015