JAPAN SEA, CHINA SEA: NO ISLAND IS AN ISLAND 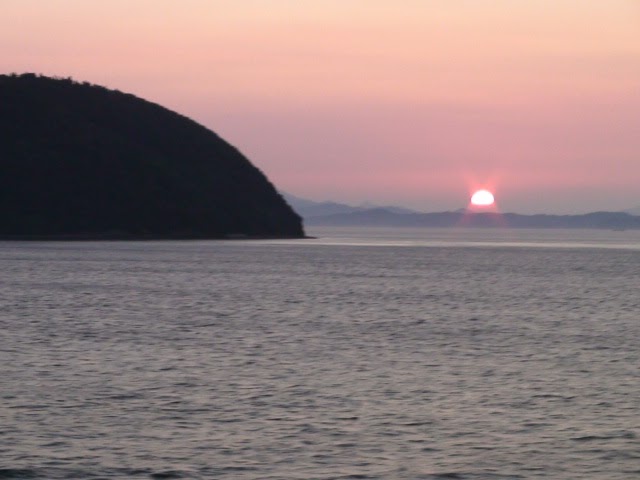 KYOTO, Japan: Japan is often described, with just a hint of defensiveness, as an island country, as if that somehow underscores uniqueness or excuses exceptions to being a good neighbor. Yet sailing from Japan to China offers ample evidence that no island in today's world is truly an island; far-flung points of land are what they are today due to long-standing liquid links.

Taking the ferry from Kobe to Tianjin, a leisurely two-day, two-night journey through the peaceful but contested waters where Japan's Japan Sea, Korea's East Sea and China's Yellow Sea swirl and overlap is an eye-opener for the harried, jet-age traveler. There's a lot of time to think, with daily activity reduced to the simple, older rhythms of no-frills boat travel. Three meals a day and a book, plus walking the deck and staring at the sea is about all there is on the menu. No Internet, no satellite television, no news.

Albert Einstein was on board such a ship en route to Japan when he learned, very belatedly, the news of his Nobel Prize. Einstein commenced his long trip back to Europe by boarding a boat in Kobe and sailing to Shanghai, disembarking on the Bund. Making a voyage more than half a century later, it was not only possible to follow a similar sea route, but to disembark on the Bund and check into the crumbling but ornate Pujiang Hotel where a sign announced that Einstein was once a guest, back when it was called the Astor.

Nowadays, nobody takes the boat, at least nobody in the Washington or Hollywood sense of the word. The slow boat to China is as slow as ever, chugging along at an unhurried pace, but it's clean and comfortable, and the stretched out sense of time it engenders brings to mind a largely forgotten way of doing things.

And therein lies some of the charm, especially to anyone tired of the long lines, repeated security checks and tense, hermetically-sealed environments of modern airports. The ferry aficionado of today keeps company with fellow travelers content with simplicity - exchange students, retirees, war orphans and ethnic Chinese with Japan-acculturated kids, seeking an inexpensive holiday back in the motherland.

As the Yanjing pulls out of the port of Kobe, it sweeps past giant naval shipyards where a large submarine is being constructed in plain view, then traverses the Seto Inland Sea, hugging barren rocky outcroppings and islets that appear to be isolated but are tightly linked by magnificent bridges, rail infrastructure and soaring power lines, not to mention the invisible television and telecommunication links to Tokyo.

Physical and political isolation have been further reduced by the speed and scope of air travel, of course, but the older paradigm of linkage - that of seaborne traffic - continues to shore up age-old patterns of politics and trade, linked by a web of shipping lanes largely out of view to the landlocked.

Sea routes may not figure high in contemporary consciousness, but they are vital and pulsing with traffic; upon the entrance to critical narrow straits like Shimonoseki, giant electric signboards blink instructions as boats line up in single file like jets on a runway, rocking gently in the wake of the long line of boats passing as they plow in the opposite direction.

Once passing beyond the breath- taking natural gateway formed by the rock fortress extremities of Honshu and Kyushu, the ferry overtakes a number of the heavily laden cargo ships that dominate the waters off Japan. Off the south coast of Korea, numerous fishing boats work close to the coastline.
Standing on deck and watching the sea go by, one is reminded not only of the vastness of our planet's watery surface but its vulnerability. The restless waves are littered with paper, plastic bottles, and bobbing bits of Styrofoam, so much so that a skilled captain could probably navigate from port to port by following the undulating trail of rubbish.

The sheer volume and seemingly endless flow of traffic on this busy water road linking Asian neighbors offers a fresh perspective on the sporadic stream of anti-Japan protests on the streets of Shanghai or Seoul. It will take a lot more than childish displays of nationalism to sink the buoyant business of burgeoning trade.

There is something deeply reassuring about the sea doing what it always has done, offering dependable links from one shore to another, offering a sense of a shared fate on a shared planet, even as it appears to divide.


Philip J. Cunningham is a professor of media studies at Doshisha University in Kyoto.