The low sun casts an ethereal glow on the treetops of the lush surroundings. Already the insect chorus heralding imminent nightfall is going full bore, while frogs mournfully belch in search of mates. An olive colored snake freezes up on the edge of the path in front of him, causing the human interloper to shudder and stop, but just as quickly the reptile slithers away, slipping into the undergrowth. The trellis-covered path leads to a concrete patio, a sterile clearing in the midst of a well-tended jungle garden. An array of lounge chairs ring the diamond shaped pool. The glittering aqua tinted water is the focal point for an assortment of fun-and-sun worshippers, almost all foreign.
John gives the tourist watering hole a wide berth, cutting instead across a broad moist lawn flanked by a row of massive, overhanging jamjuree trees. Under the dark canopy over ponderous, overhanging branches he meanders along, this way and that, trying to avoid muck, puddles and squawking birds until he comes upon the lake pavilion. Red velvet ropes cordon off the venue from the rest of the hotel grounds. The VIP dinner party slated for the lake pavilion is already underway, with music playing and food being served. Barefoot Thai dancers clad in traditional garb gyrate as if in slow motion, their ornate crowns tipping left and rotating right, glittering in the candlelight. Brass cymbals ring and glasses clink while the whiff of fried garlic and hot chilies, jasmine and alcohol lace the air.
He’s back, back in the fragrant, hope-infused oasis where he first fell in and out of love, a place that has lurked seductively, sometimes menacingly, in his dreams ever since. What better night to reunite than a full night moon like this one?
It’s Loy Kratong, the festival of lights. Distant fireworks are already pricking the remnants of the dark vermillion sky somewhere over the banks of the Chao Praya, while candle-lit kratong floats being cast adrift on the banks of the mighty river, as well as in lakes, canals and ponds across the land.
The sky is free of rain; the moon is placid and rotund, floating buoyantly above the eastern horizon. The chirp of crickets is everywhere, cool-season flowers are coming into bloom and thanks to a gentle but steady breeze, and holiday traffic patterns, auto exhaust has lost its chokehold on the air, at least in this lush, privileged corner of the city.
After a quick pit stop in the hotel bathroom, John returns to the steamy outdoors. The face he saw in the mirror while splashing water on his face wasn’t looking younger, that’s for sure, but then again, she’s ten years older too, and there’s the hope that the reunion will be so joyful that the minute ravages of time will go unremarked upon if not entirely unnoticed.
Subtly thwarted by vigilant guards in crisp white suits who examine invitation cards, John decides not to join the party yet. He remains reassured by the conviction that once the ravishing object of his affection arrives, he will no longer have to hide and bide his time on the perimeter.
Killing time, he ambles around the section of the lotus pond that isn't roped off. Here, candle-lit, flower-decked floats are being launched by eager tourists under the supervision of conscientious Thai staff. The sun is gone and the stars are starting to show. On the tourist side of the pond, a pair of pretty silk-clad hotel staffers introduce elderly Europeans to the colorful floats crafted of banana root, explaining that the kratong are typically decorated with pandanus leaf, purple Amaranthus petals, and sticks of incense. The candles are said to represent the light of the Buddha, while the launching and setting adrift of the candle-lit float is said to be a good way to get rid of bad karma.
While watching from the rear, John slyly seizes the opportunity to drifts over to the "Thai" side, thinking he might just slip into the party unannounced. He attempts to pass through an unguarded opening in the velvet rope.
“Welcome, sir!” greets a voice out of nowhere. A uniformed hotel attendant had just stealthily emerged from the shadows like a phantom, puncturing John’s dreamy vision of the intimate past. “Are you lost, sir?”
“No I am not.” John quietly bristles. Why does he keep getting lumped together with all those fresh-off-the-plane tourists? Lost? Perhaps. He’s at ground zero of a lost love, about to reconnect with a life that has eluded him for so long.
“Please step this way, please sir!” the attendant warmly urges.
Convinced that Joy's arrival would change everything, John decides not to put up an argument and instead docilely follows this escort towards the glow of Christmas-lit trees and twinkling bushes.
“Happy Loy Kratong, sir.”
“Happy to you, too,” John answers distractedly, his eyes focused on the distant constellations of light emanating from the private party. He isn’t inside yet, but he will be any minute now.
Chatting with the attendant, who seems to be impressed by all things "international" John immediately realizes the futility in protesting that he isn’t a tourist. The man is just going his job, helping people to find their place, even if it means moving them apart.
As the attendant leads him deep into the tourist pen, he feels like a mustang being roped into the wrong corral. He keeps up a facade of calm, but he is champing at the bit with silent indignation.
“Here we are. You are welcome to enjoy International Loy Kratong Party.”
“Ah, thank you.” John sighs resignedly. Once a farang, always a farang.
Now that the hotel staff has outed him, he’s got no choice but to pretend he’s enjoying the little segregated shindig for flight attendants and package tourists; a dash of local color, a sprinkle of hotel hospitality. It’s Loy Kratong for dummies, and to everyone’s gaze but his own, he’s one of them. 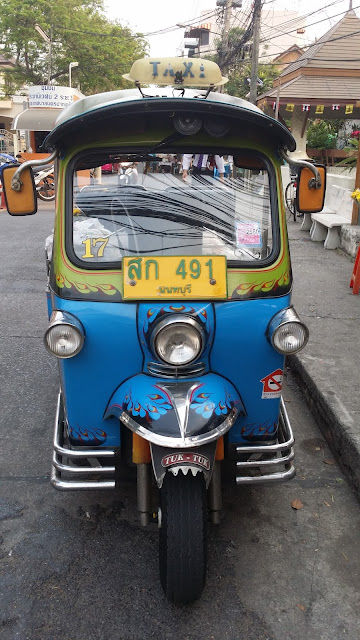 (An excerpt from BANGKOK SUNSET)


John takes a seat on a bench sinks his head in his hands, a headache is coming on. He closes his eyes and tries to will away the searing crescendos of the internal-combustion-engine orchestra that aurally assaults the shrine. Cocooned by the all-embracing heat, he sinks into a trance, succumbing to the call of the past, darting in and out of lucid dreams.
The shrine presides over a shadowy world of fumes, the intersection of spirit and matter. John closes his eyes, trying to picture the world back in the day when the ancient dance the dancing ladies are dancing was new, a world without electricity or machines, a world of unsullied skies and pristine streams; something almost as far beyond the ken of today’s city as today’s city would be to the ancients.
A misty series of images, first a point of light in the distance, then a glowing rectangular window frames the figure of a young girl smiling across the years. Phusai ngam, a beautiful indirect way of saying “I want to know you.”
To this day he wonders about what happened. It wasn’t like him to take the liberties he took; and in all likelihood it was not like her to let him take them, either. What prompted each of them to take an evolutionary leap with a total stranger? Was it just random, selfish genes and eager-to-replicate DNA doing its unthinking thing, or was it part of a larger more spiritual scheme of things? He had preferred to believe the former because it seemed to let both of them off the hook. What difference did it make if she was good or bad, flawless or fallen? He had had her, and she him and even though she was lost in time, a thing of the past, were their fates not wed in some ancient elemental sense?
If there was a heaven, could she hear him thinking?