TRUMPED OUT: BLUE ISLAND IN A RED SEA 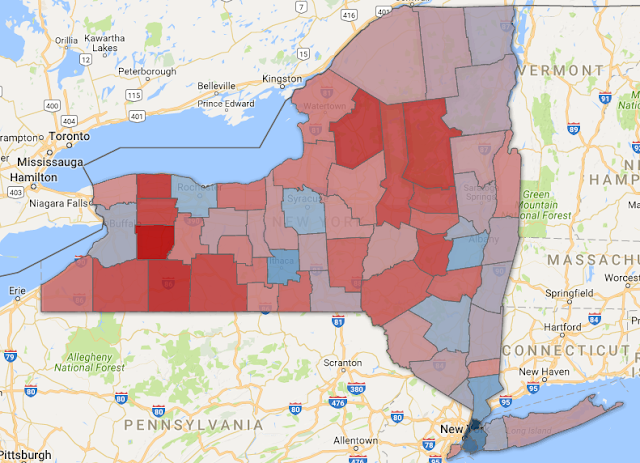 Perhaps the most troubling aspect of a Trump presidency is not the man’s big-headed, pig-headed penchant for self-promotion, but the shock wave of hate he has awakened. Americans are stressed and politically distressed, expressing anger in vulgar, bipolar ways.

I observed the current electoral cycle from Ithaca, New York, a university town that voted 85% for Hillary Clinton, with a smattering of votes for independent Jill Stein and others. But the familiarity of one's immediate environs can be deceiving, for one only has to drive a few minutes out of this liberal community and then it’s conservative country for hundreds of miles in every direction.

People on this little blue island in a big red sea are worried the political waves to come. Already there was a “cry-in” on campus and a mourning vigil on the downtown commons. Local cafes played comfort music, mostly sixties rock and folk ballads such as “This Land is Your Land” and "Imagine" while doling out extra servings of comfort food. I was in the public library on the day after the US election looking for books on the history of fascism when an old white-haired woman came up to me, expressing fears about the future. She showed me an illustration of the planet earth perched on the edge of a sharp precipice.
“That’s how I feel now,” she explained.
“You mean, like, earth in the balance?”
“No. Like the end of the world…I am Jewish, 100%. My mother was a victim. The racial hatred. You know, the swastika.”

The upswing of swastika taunts in the wake of Trump’s victory is odd and troubling, but not symptomatic. Some of Trump's supporters are indeed unrepentant chauvinists and xenophobes, but he did better than his "respectable" Republican predecessor Mitt Romney with minorities, and better than Hillary Clinton with women in key states.

Indeed, one of the few Trump supporters I met in Ithaca was an African American magician who does magic tricks on the Commons. When I saw his folding table decked out in support of the great white hope, I took it to be a put-on, part of his show, something he would make disappear--presto! But he turned out to be utterly serious in conversation. I later saw him on local access TV promoting Trump.

Ithaca’s hip reputation of being “centrally isolated” is a geographic fact of life, for it sits squarely in the middle of upstate dairy country, far off the grid of interstate highways and train lines. What I didn’t realize at first was the acute political isolation.

“Liberal” Ithaca is the rare exception to the area pattern of job decimation and failing farms, an enclave where real estate values rise and jobs are created. Being home to Cornell University and Ithaca College alone can explain the difference, but it is also a beneficiary of ecotourism, the organic food boom and it serves as a hub for outlying hamlets.

The weathered church steeples, abandoned workshops and struggling brick and mortar shops bring to mind Main Street, USA. Not the Disney-lite version, but the heavy Hollywood one. If you’ve seen Jimmy Stewart’s hometown in “It’s a Wonderful Life,” (a composite of nearby Montour Falls and Ithaca) you can picture what it looks like. Or used to look like. Things have gone downhill to the point that the dystopian decay of “Back to the Future” is real.

Rednecks are among Trump’s most fervid supporters, but so are humble, gentle farmers, army veterans and evangelistic Christians. The five-hour drive from Ithaca to New York City takes one through little Trumpvilles dominated by fast food chains and derelict downtowns. With so many impoverished hamlets in the agro-industrial rust belt, it’s not for nothing that even locals refer to the Southern Tier along the Pennsylvania border as “Forlornia.”

But to dismiss the blue-collar workers and rednecks that race around backcountry in pickup trucks as white trash (or “deplorables” as Hillary put it) was a miscalculation of the Democrat’s campaign. Having lived subsistence style in the shadows so long, the rabblement’s anti-establishment hatred was palpable when offered a chance to show how they felt at the polls.

Trump succeeded with “deplorables” because he paid attention to them.

As much as “The Donald” might like to hear himself talk, he paused long enough to hear their pain. He jetted into impoverished towns and winged it, speaking off the cuff in populist lingo, dropping the pretense of civility to speak in stark terms that struck a chord.

The Democrats, clinging to Obama’s urbane urban strategy, foisted the tired Clinton dynasty on a rust-belt nation in the midst of a paradigm shift, and stumbled badly. With Bernie Sanders as the agent of change, they might have had a chance. With Hillary, it was too much of the same old, same old at a time when it should be evident that nothing will ever be the same again.

Given the vulgar rhetoric that ravaged all sense of decency during the campaign, fears of creeping fascism are not without foundation.

For better or worse, a deeply divided America is on the cusp of change, and the whole world watching with bated breath. 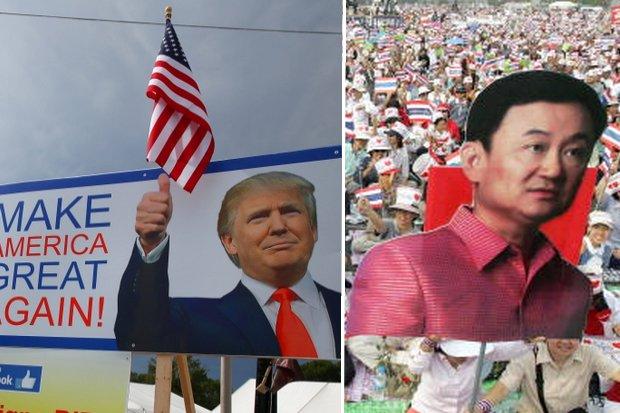 "The Idiosyncratic Appeal of Megalomaniacs"

“What do you think of Donald Trump?”
“Is it really possible for him to be President?”

During a recent series of interviews and informal conversations conducted with retired Thai statesmen in Bangkok, I frequently found the tables turned on me. Suddenly I was the one being put on the spot and being asked questions. “What’s happening to America?”

Thai politics, with its colorful cast of characters, coups and counter-coups offers an unusually rich range of things to talk about, and is usually a full plate for discussion in itself. And yet even during this intolerably hot season, with Thai political tensions running high and fears about the future impacting life on all levels, I found my distinguished interlocutors drifting off topic due to an unusual political phenomenon that can be summed up in a single word.

Thais of all political stripes seemed amazed and dispirited in equal measure that such a man, a showman, a showman all show and no substance, a populist who doesn't even make an effort to be nice to people, could dominate American political discourse to the point of becoming a viable candidate for President.

Former foreign ministers, prime ministers, police, generals and scholars alike expressed dismay with the course America seems to be taking. Off-course is more like it.

Critics of Thaksin were quick to see parallels with the populist Trump, only Trump was worse.

When unusually rich individuals run for top office it raises the question of money. Can influence be bought? Is the political system being gamed? The corrosive power of big money in the supposedly level playing field of democratic politics is legend, and it goes way beyond influence peddling and the promise of spoils.

But at the same time, it is not unusual for ordinary folk look up to billionaires, rich by hook or by crook, as rugged self-made men, the financial success of whom suggests that they possess the magic touch when it comes to money. And if they are good at money, which speaks for itself in a materialistic society, then who knows --they might be good at politics, too. The super rich are different, they have money to back them up. While the traditional wisdom of the moneyed class is to avoid the limelight, or to engage in philanthropy for show, there are political mavericks among the billionaire class who possess the aura of leaders in the sense that they appear to beholden to no one but could change the lives of millions should they so choose.

People like Thaksin and Trump seem to have blind faith in their rightness for office, but they lack the character of public servants and spirit of public service. They are driven by egos so large that they woo, wow and alternately alienate ordinary folk who are taught from a young age not to be greedy, self-centered and conceited. They are outrageous and they know it; their big bobble heads may look comical and be the butt of jokes, but in the process they attain a stature larger than life.

Yet as ridiculous as the posing and preening might be, publicity-hungry narcissists such as Trump and Thaksin have proven themselves to be shrewd masters at media manipulation. They know what buttons to press to arouse the rank-and-file. They know how to pretend to be outsiders, combating the very system that has made them unusually rich. They get plenty of press, and much of it for free.

It’s a show best seen on television, of course, because they are in essence, stars in a non-stop reality show of their own making.

As businessmen, the trumpeting of a name, the constant courting of fame, be it Trump or Thaksin, is a game that contributes to making a brand designed to outlast the particulars of any particular media encounter. In a way politics is all about finessing fame and money, using one to augment the other. For most of the super rich, the cold hard cash is enough. But then there are those cavalier souls who see snagging a seat on the top of the political system as a way of cementing interests, outdoing rivals, protecting interests and furthering the brand.

Both Trump and Thaksin are careless in their public pronouncements, clumsy and inarticulate in intellectual terms, yet each has a way with words in the sense that they can seemingly talk themselves out of anything.

There’s a Teflon-like quality that accrues to plain-speaking populists, and in the eyes of their core supporters at least, they can do no wrong. If they suggest something outrageous one day, it’s the new normal the next. Subject to no one’s sense of propriety but their own, they make the rules as the break them.

There are consequences of allowing such egos to quench their desires in the public realm, though the damage done depends on the power of the platform.  Whereas a divisive, over-the-top, Pied Piper of a populist Thai prime minister could merely lead a nation astray, an opportunistic populist in the White House could very well ruin the world.