CAMBODIA OWES THE US NOTHING 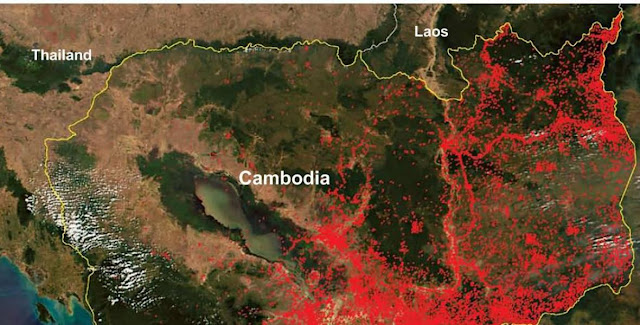 ITHACA, NEW YORK – It’s the height of hypocrisy, arrogance and amoral audacity for the United States to demand Cambodia — target of one of the most brutal bombing campaigns in world history — to pay back war debt accrued by the pro-U.S. puppet regime in pre-1975 Phnom Penh, but it is very much in keeping with the hypocritical, arrogant and audaciously amoral tone in Washington these days.
The $500 million bill that Uncle Sam has come knocking for is not small change, but it is a pittance compared to the destruction the U.S. wreaked on Cambodia by incessant B-52 bombing during the Vietnam War that left hundreds of thousands dead in its wake, including countless children.
How does one even begin to recompense for a cratered land littered with lost lives? How does one account for the fact that U.S. President Richard Nixon, who ordered the invasion of Cambodia, and his right-hand man, National Security Adviser Henry Kissinger, who was the architect of the bombing, never saw a day in jail?
Guilty of war crimes, the dynamic duo were not only not prosecuted but continue to be lauded as great men of American politics. Is there no justice with a capital “J”? Does the law only apply to the weak, badgered and unconnected? Must the bookkeeper’s ledger trump decency and common sense?
Cambodia is at peace now, a country that has come back to life from a chillingly real year zero, and the zombie years that followed. Its political system leaves much to be desired, in part because it still carries the scars of the intense cycles of violence set off by the indiscriminate U.S. bombing in the first place.
War correspondents who witnessed the U.S. intervention firsthand such as Elizabeth Becker, James Pringle and William Shawcross have made it eloquently clear that Cambodia owes the U.S. nothing given the horror of the bombing and its lingering aftereffects.
Is it not the better part of valor to leave well enough alone?
The real mystery of the peace is why an experienced State Department hand and “human rights” oriented diplomat such as U.S. Ambassador to Cambodia William Heidt should be so diplomatically inept as to bring up this issue, and why now. What was he thinking?
To recast the issue in the crude terms that have recently taken hold in U.S. political discourse, especially on the part of the triumphant Trumpists, it can be summed up simply as this: America is No. 1. Foreigners take advantage of U.S. generosity. Business is business. If the U.S. is owed money, make ’em pay.
While it is tempting to see this breach of decency and unbearably one-sided demand for money as typical of the “Trumpocalypse” that has now descended on Washington, it is important to point out that Heidt was appointed by President Barack Obama and personally arranged Obama’s state visit to Poland. Heidt’s resume suggests diplomatic accomplishment in human rights, conservation and, ironically enough, “economic diplomacy.” Clunk.
So what gives? Is Heidt, who served under Secretaries of State Hillary Clinton and John Kerry during his most distinguished years in the State Department, speaking for the residual bureaucracy left behind by his former bosses, or is he already speaking for his new boss, Rex Tillerson?
It doesn’t seem possible that an ambassador who has shown sufficient respect to his host country to learn to speak some Khmer and travel to nearly every rural province should be so tone deaf and indelicate in manner as to demand repayment of money dating to the inferno of the war period.
Whose bright idea was it to demand payment based on technical determinations of dubious paperwork before the apocalypse? Is the Trump-ravaged State Department so worried about cash flow that even Cambodia is getting the squeeze?
Trump presides over a chaotic White House swirling with controversy, conflict of interest and the ever-present whiff of scandal. He has yet to round off his Cabinet and confirm powerful appointees, so it is unlikely that the Phnom Penh ambassadorial post is the object of presidential attention; it’s not even a sure thing that he could locate it on the map.
Given Cambodia’s status in U.S. eyes as a perpetual sideshow, it is understandable that an Obama appointee should remain in place until they get around to replacing him.
To give Heidt the benefit of the doubt, he may be working under duress, eager to continue in his post but forced to flip flop in accordance with the merciless values of the new administration.
If so, the principled thing would be to quit and set the record straight.
Cambodia was not a belligerent; it did not start war with the U.S., nor did it seek to. What’s more, trying to collect money after a bloody war tends not to work out well for either party, even in circumstances where the debt is demanded of a true belligerent, which passive Cambodia was not.
Punitive war reparations demanded of Germany by U.S. President Woodrow Wilson and the wise men of Versailles after World War I in 1919 set Europe on a course of renewed conflict. Not a few victims of victor’s justice took a dim view of the diplomatic bookkeeping of war reparations, including a disgruntled, shell-shocked corporal called Adolf Hitler.
Cambodians of all political stripes are upset, and rightly so; even to international observers unconcerned with Cambodia, the news beggars belief, a jaw-dropping case of out-of-tune diplomacy.
If Washington persists in demanding the dubious payment, based on the dubious logic that Cambodia is no longer war torn and new buildings are going up all the time, as cited by the U.S. ambassador, then the U.S. will score a game-losing own-goal, ceding what remaining influence it has in Cambodia to a country that is investing in new buildings and infrastructure, namely China.
Philip J. Cunningham is a media researcher and consultant.
on March 24, 2017