XI GOT PLAYED, BUT HE PLAYED IT WELL 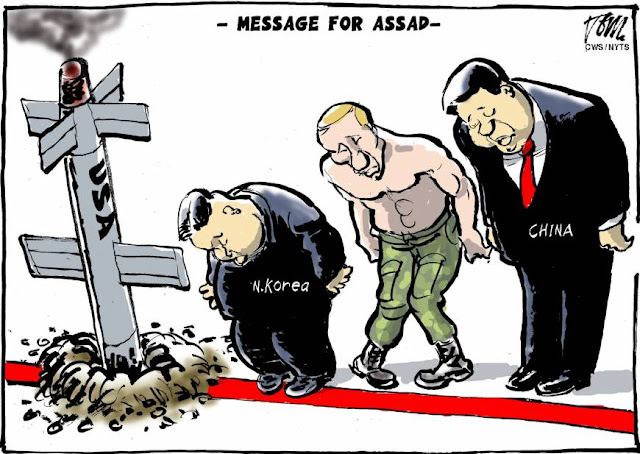 “Fruitful” said the People’s Daily, while an upbeat China Daily described the Mar-a-Lago meet as a ‘win-win’ tete-a-tete.

Tellingly, Chinese state media coverage of President Xi’s visit to the US was whitewashed of any mention of the dramatic April 6, 2017 missile attack on Syria, first revealed to Xi during a ceremonial state banquet.

Chinese observers had to wait until after Xi was safely out of the US to get the news and let fly their true feelings about the provocative timing of the provocative act.

The contrast of Chinese and Western coverage is a tale of two summits, or more precisely, the two conflicting tales of the same summit.

A missile strike in the middle of a summit, what was that all about? A shot across the bow? A show of military prowess second to none? An oblique cry for help with North Korea? A non-verbal way for the potty-mouthed serial insulter who famously said “China is raping our country” to express displeasure within the confines of banquet protocol?

Trump’s sneak attack on Syria used the summit as cover. While Xi was earnestly talking “Belt and Road” Trump was thinking “Shock and Awe.”

Xi handled the rude interlude with poker-faced aplomb, despite the insult inherent in the awkward timing.

Imagine being guest of honor at a state dinner planned to trumpet bilateral ties only to have your host lean over as dessert is being served to whisper, “we’re bombing Syria tonight.”

Cause for indigestion, if not indignation, is it not?

You hold your rising sense of alarm in check. You play it cool, you play it presidential, but there’s no disguising the fact you have been played.

You get the sinking feeling you’ve been used as a prop, a backdrop, stuck in a sideshow while the clown steps into the center ring to draw more attention to himself in a more explosive drama.

And let’s say you are a bit face-conscious as the self-styled strongman of the world’s biggest country because you have just flown halfway around the globe to a remote resort described by your media as “the southeastern US coastal town of Palm Beach” to reach out to your counterpart, only to be put on the spot.

What do you do? Confront and argue? Storm out in protest? Or finish going through your pre-scripted itinerary and quietly slip away?

The state press in your home country dutifully omits mention of the marred summit at Mar-a-Lago, but a military strike in a tinderbox country is a hard thing to hide.

You still carry the burden of showing a billion plus people back home that you are the man, one of the great political figures of the contemporary era, that you command respect wherever you go.

But your host pulled a fast one on you. It’s the worst kind of insult--you’re not even sure it’s an insult at first because it seems inadvertent--but it sticks. The trick was pulled so fast, and with so little advance warning, that you look like a co-conspirator in a gratuitous act of war in contravention to your stated policy of non-intervention.

So what do you do?

You keep your cool and continue to play the good-natured guest who respectfully endures the song and dance performances of children; musical interludes that may well turn out to be the high point of the summit.

That night, you hightail it out of that tawdry tropical town, bolt from a tinsel castle entirely lacking in the pomp and grandeur of the national capital. You get back on your custom-designed jumbo jet and make a brief stopover in Alaska to gaze at some snow-covered peaks and eat a bite of seafood, as if to salvage something from a journey to humiliation and back. You look longingly at the mountains, as if you are casting your eyes on America for the last time.

Your national media understands, even before they get detailed, explicit guidance to fill in the gaps, that you have to come out of this looking good, even if you are not feeling good about it.

It was a successful summit—could your captive media portray it as anything else? The photo coverage is adequate, even endearing. You held your own in a bewildering, gilded environment of reality TV stars, hard-gripped handshakes and aggressive non-verbal posturing.

But you were treated like a mark by a world-class con man, a mere prop in another man’s drama.

The US media is free, so what can you say? Free to ignore you, free to entertain, free to follow base impulses, free to cash in on calumny and killing. Free to bark en masse like dogs of war, free to behold the “beautiful” sight of Tomahawk missiles launched like fireworks, free to rally around the flag. Free to admire a commander-in-chief willing to kill, willing to humiliate, willing, at last, to toe the Beltway line.

You got punked by an orange-haired clown who wears too much makeup. Your august presence was but a footnote to the big news of the day. You merited less than a minute’s time, if that, in a news cycle dominated by the whoopie cry of war.

The incredible shrinking summit. Going, going gone, You came and went. You left without luggage but not empty-handed. Your host promised a reciprocal visit to see you in your capital later this year.

Where might China let the missiles fly to return the favor?
on April 10, 2017