TRUMP'S WORDS RETURNING TO HAUNT HIM 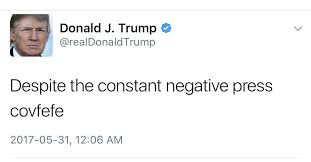 U.S. President Donald Trump likes to talk and he likes to tweet but his words are coming back to haunt him.
“Drain the swamp!” “Stop the leaks!” “Lock her up!” “Extreme vetting! — these gems have gained a new resonance that aptly apply to him, his actions and his appointees.
There’s his documented mocking of Barack Obama for taking vacations while president, and yet Trump has hit the golf course at various resorts with his name attached nearly every weekend since his inauguration. There’s the drain-the-swamp rhetoric that now sounds less like a promise to his political base and more like a reference to the quagmire he has created. He has belittled opponents for not showing respect to the FBI, then he fires FBI Director James Comey without a kind word, followed by threats to expose him. Then there are the mean-spirited chants of “lock her up” led by Trump’s then-national security adviser, Michael Flynn, now himself the subject of a serious criminal investigation. “Lock him up?”
What goes around, comes around, especially with a man who flip-flops his position on an almost daily basis. So where’s he going on his first presidential trip abroad? Saudi Arabia, the country he blamed for 9/11.
It’s as if words don’t mean anything to him, consistency is for losers and rules don’t apply. Taxes are for the little guys, ditto for the law. The real question is how Trump has gotten away with as much as he has gotten away with for as long as he has, both as a wheeling-dealing, oft-bankrupt businessman with documented shady business practices, and as president, where he lies, bullies, cajoles and struts his stuff with the whole world watching.
The rocky tenure in office of the shameless one has not been an unmitigated disaster. Like a broken clock that tells the right time twice a day, Trump stumbles on workable ideas now and then. This seems especially true in East Asia where China, Japan and both South and North Korea have taken notice of his belligerent talking points and acted on the same with cool compunction, taking his inflated rhetoric as a real estate hustle and rug-merchant haggle, because what he really wants to do is make a deal.
Trump’s also been good to the media, despite words to the contrary, because his clownish, inflated, self-infatuated persona is easy to mock and fun to toy with. Late night talk show host Stephen Colbert is one of many who has risen to the occasion with quips like, “Mr. Trump, first of all, you are a bad president. Please resign. …”
Fiery opening monologues and humorous readouts of borderline insane tweets have boosted ratings and attracted exactly the kind of slap-back tweet from the White House that competitive entertainment shows live for.
Should Trump actually resign, or get forced out, Michael Pence, the hyper-reactionary, soft-spoken vice president, automatically gains the White House. If nothing else, commentary will suffer and the jokes won’t be as funny because the joke will be on the U.S. public. Pence is a right-wing cipher, the opposite of good comedic material.
Of course Trump might soldier on, but as long as he does, his words will haunt him every step of the way.
Bleak, secretive Saudi Arabia, where gruesome torture and bloody executions are part of state-enforced intolerance, is certainly an odd choice for the president’s first trip abroad. According to Trump’s own extreme vetting criteria, another person taking the same trip probably wouldn’t be let back in. Nor is Trump’s already trumpeted speech on Islam bound to bring peace to the Mideast, though he seems to think he has the King Midas touch. If he wings it and departs from script by as much as a single sentence, a diplomatic disaster looms. But that’s not all; Israel, already irritated by Trump’s cavalier handling of top secret intelligence, is also on the itinerary.
So why go flying off to the Mideast now? In taking such a trip at such a time, he is at risk of returning to a country that has firmly turned against him. With formidable FBI veteran Robert Mueller as special counsel investigating potential presidential crimes, a jaded media looking for any excuse to strike back at the man who mocks their output as “fake news” and opportunistic politicians on both sides of the aisle testing the wind and tacking accordingly, the U.S. commander in chief will get less than a hero’s welcome once back home.
Sure, it’s a tried and tested feint for a besieged president to play the game of looking presidential on a lengthy trip abroad, and Trump’s advisers, when they are not backstabbing and fighting with one another or being fired, may have reckoned some fresh, foreign air would do the big boss good given the foul atmosphere inside the D.C. Beltway. But the Mideast itinerary is a minefield of explosive issues, bad optics and things waiting to go wrong.
Trump, who seems to fancy himself an expert on all things Clinton, and was a golfing pal of ex-President Bill Clinton before the most recent election cycle pitted him against Bill’s politically recycled wife, may be taking a page from the Clinton playbook.
How could a playboy of his caliber not be aware of the long trip the Clintons took to China in July 1998 just as the Monica Lewinsky allegations were reaching a fever pitch? It’s surely a telling moment for a president, Democrat or Republican, when the scrutiny of the free press and the heat of democracy’s kitchen gets so unbearable that it comes as a relief to touch down in a cold-hearted authoritarian land where leaders are always right and never wrong.
on May 22, 2017