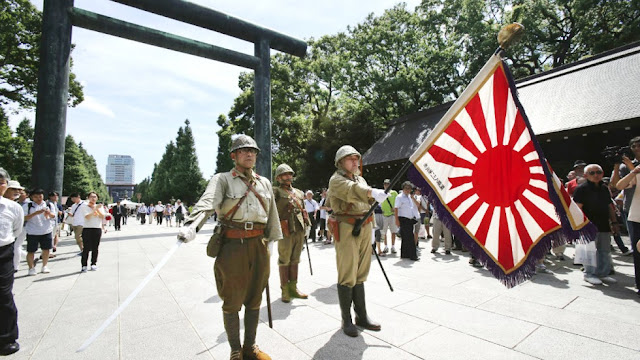 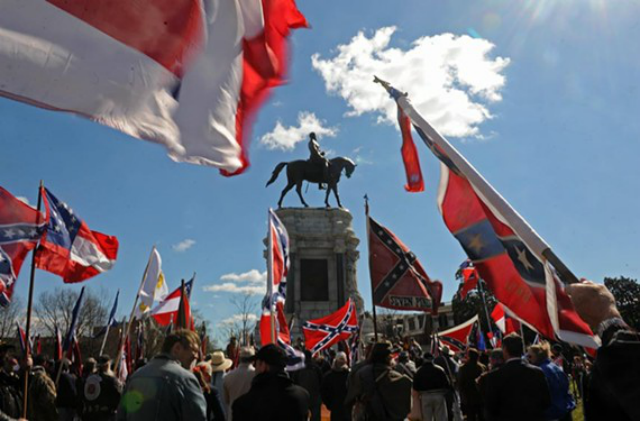 Losers of lost wars looking for rewrite history
BY PHILIP J CUNNINGHAM
Japanese Prime Minister Abe famously rushed to New York in November 2016 to obtain an “audience” with the gilded man in the golden tower.  Shinzo Abe took some heat for this seemingly desperate and unstatesmanlike hustle, well before Trump’s inauguration and move to the White House, but for better or worse his odd courtship of  “The Donald” has blossomed.
On the one hand, Japan has wedged itself closer to the US center of power than China could ever hope to do, not that truculent, nationalistic China under the face-conscious Xi Jinping has shown any great desire to supplicate and suck up to Washington. In this sense, the lean-on-Washington policy outcome was easily achievable even without the special hush and rush visit to Trump Tower. It’s true that previous US administrations have methodically passed over Japan, treating the US-China relationship as the most important bilateral link, bar none, but given that fact that dragon slayers outnumber panda-huggers in Trump’s top coterie of advisors, a hugfest with China is not in the cards.
The new “special” US-Japan relationship, with echoes of the “Ron-Yasu” bonding of the Reagan era (a special relationship that was undone by Japan rising too fast for America to comfortably adjust to) is buttressed by shared concerns with containing the rise of China.
Enter North Korea stage left. The unpredictable plump kid from Pyongyang is a demonic joker; the wild card in any reasoned and measured foreign policy game. But he has a role to play for both sides, because Japan's hardcore rightists require an enemy to rile up and unnerve its peace-minded people to the point of no longer being peaceable.

Kim Jung-un fits the bill, a snarky personification of the bogeyman required to justify extreme measures at home: ditching the peace constitution and arming Japan to the hilt.
More than anything else, North Korea puts the Abe-Trump relationship to the test, because Trump is on record as saying that Japan should do more to defend itself, even in nuclear terms, while Abe has made a career of shredding Japan’s intolerably peaceful image in his bid to re-arm and re-ignite the passions of past nationalism. Will the US continue to commit itself to protecting Japan or shall Japan go it alone and protect itself?
Although Abe and his cabinet kept a prudent distance from the annual ritual show of fealty at Yasukuni Shrine in mid-August this year, Abe has made a career of glorifying the last war so that Japan might one day go to war again. If and when it does, the munitions business, guided by his grandfather Kishi in the last war, will boom again.
The huge bronze torii at Yasukuni Shrine is Japan’s ground zero for belligerent recidivists who lament losing the war that put them on the wrong side of history. In this sense it is not unlike the summation in a single piece of bronze the many sorry bronze statues of US confederate war heroes who similarly glorify a lost war.
After the eruption of violence in Charlottesville, Virginia, Trump has come under fire for tolerating, if not dog-whistling and tossing red meat to irate losers on the white nationalist side.  Abe, too, could come under fire very quickly if he misjudges the national mood in favor of his narrow and somewhat odious base; hence the tactical retreat from Yasukuni.
Unlike Trump, who prefers tweets to Teleprompters and seems to relish upending common sense, Abe and his beleaguered team judged this was not the time to be reviving bitter, hardcore memories that serve to divide rather than unite.
What Japan’s right-wing Hinomaru-waving sound truck commanders and the torch-bearing neo-Nazis and neo-Confederates in the US do have in common is an aggrieved, narcissistic sense of loss. They glorify lost wars, no matter the human cost, and lost “heroes” of lost causes, no matter how time-blackened their names.

It’s no coincidence that the disciples of these losers are losers from the get-go, reared on the wrong side of history,socially ill adept, politically tone-deaf and hard-pressed to win at life in a stable, orderly peacetime economy. They feel wronged, but are in the wrong, yet, no matter how deplorable, they are ignored at society’s peril.
It is no coincidence that Abe and his core following of right-wing misfits share with Trump and his core following of right-wing misfits a bent for fanaticism. They thrive on offending common decency and good taste. At considerable risk to their political careers, both Abe and Trump have sought to bolster their strongman status by stirring primeval urges in primeval men: blood, soil and bronze.
This down and dirty political grounding is at odds with the fast-lane life of fine tailored suits and fashionable circles of money and prestige, yet both men, for reasons of strategy and temperament, rely on rabble as well as reason. As cold-hearted contrarians, they express themselves most revealingly when revising history, revising reality, trampling on rights and skewering social taboos.
In Japan the most critical taboos deal with the renunciation of war, while in the US (which does not flinch from war regardless of which party is in power) renunciation of racism is sacrosanct.
Both men are high-flyers who have ridden high on flaunting refined values and upsetting the deeply-held pieties of their respective societies.
In this sense, Abe’s eager courtship of Trump, with its backroom backslapping in hidden towers and chumming around on the golf course, goes beyond the dictates of national policy photo-ops and speaks to the meeting of a kindred clan of hardliners.