EYE OF THE STORM 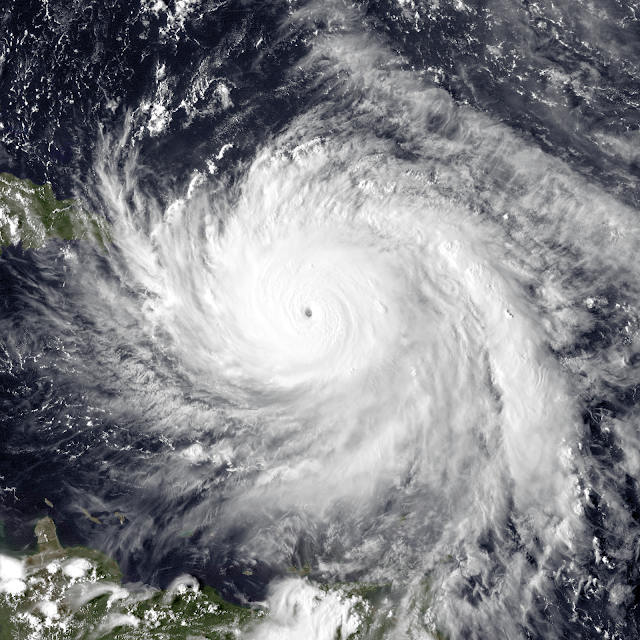 Turn on the tube or flick open your phone and the drumbeat of violence is everywhere. It’s on the nightly news and on the police and procedural dramas that precede and surpass the news as variations on a theme. Things are heating up in every possible way. Even the weather is getting more violent.

Such daunting conditions call for undivided attention, top-notch science and social unity  if the tipping point to rising seas and a global deluge is to be avoided, but it’s hard to concentrate on anything these days. The relentless burning of fossil fuel and paving of the wilderness have created lab-like conditions that spawn and speed up global warming. It's not just Franken-cyclones unprecedented in punch, but heat waves, droughts, flooding and wildfires of biblical proportions.

Law and order, turbulence and chaos. As the media beats the drum of breaking news, the badder the better, it drowns out thoughtful deliberation, instead amplifying the crassest aspects of a crass society. The nightly news reports have become so absurd, they are hard to distinguish from late night TV parodies of the same.

Twisted tweets contribute to the battered byte syndrome, an era where fake new reigns supreme. It's hard to tell right from wrong when getting whacked with excess information in all directions, with hardly a breath between gasp-inducing shockers. Hyper-connective technology and malignant feedback loops are part of the problem, serving up constant fear, static and division, but geopolitics and attitudes on the ground are changing, too.

America’s reality-show impresario President Trump threatens the existence of distant foreign nations with dire late-night tweets and the desensitization continues apace, delivered in billions of bits and bytes, day and night. Bullet-addled dramas keep eyes glued to the screen until the next shocking update or shoot up or terror attack. The overdose of “breaking news” may be an advertiser’s delight but it is also a telling sign of the times. Mainstream news may not be fake but it is broken.

The US emerged from the smoking rubble of World War Two as a model of a genial, generous democracy but it has come to represent the opposite; increasingly tribal and accusative, imperious and spiteful, riven by the vanity of identity politics, partisan ire and ruthless greed, with much of the rot at the top.

To make a bad state of affairs worse, the US lacks decent leadership, the operative word being decent. A reckless real estate scammer and sham presides at the helm, conning and conniving, getting rich and getting even, aided and abetted by his slumlord son-in-law and a coterie of thuggish cons.

If it’s bad at home, where electoral rituals and constitutional protection at least make it possible to protest the obvious insanity of the moment and make some noise, it’s rather dire abroad where victims of US violence frequently die in silence. Emboldened by Obama’s affable okay and cool psycho-killer style, the lords of war can kill without being killed, targeting drones to strike unsuspecting flesh from above, seeking full-spectrum domination. It's Beltway brutality--warring at will without being held to account.

Uncle Sam likes to dress up in drag as Lady Liberty, but there's little room for feminine intuition in the global gladiator's arena of winner takes all because might makes right.  when it comes to  leadership of the free world worth if Domestic election cycles wave the democratic banner while intensifying the never-ending war from the air, gratuitously bombing foreign shores to shore up support and score domestic political points. Johnson and Nixon did it, Clinton and Bush too.

War hovers on the horizon for the Korean peninsula, yet the same-old pundits want to bring it on, blithely invoking the nuclear option. Even Hollywood has helped heat things up, cranking out a film about killing Kim Jong-un with graphic special effects, a film endorsed by Obama.

Information wants to be free, or so the net evangelists say, but it’s capturing the free flow of data where profits are made. Edward Snowden alerted the world to the dangers of NSA snooping, but that’s a discreet affair compared to the raucously invasive data-mining of the Silicon Valley giants who monetize the minutiae of daily life. The top five most powerful corporations in the US are deeply invested in selling personal information, yet they lack even the fig leaf of oversight ascribed to government surveillance. Amoral moguls profit obscenely by paying attention to our inattention to intimacies, while monetizing shattered attention spans.

The Pentagon expands and expends its awesome arsenal, while trickle-down militarism and weapons of war enter the US domestic arena, triggering cops to use lethal force under the most banal of circumstances, answering with SWAT teams and lead projectiles any apparent challenger who displays less than abject deference.

America is on the brink, and while there’s unease, if not a rising sense of panic, it is not clear what can be done about it. Elections? We know how the last one turned out. Media? Is it bringing people together or stoking division and fear?  Law? Not when money can buy influence and rich get out of jail free. A “limited” military action overseas? A short, limited war, like all the long wars were billed before they careened out of control? With the rip and roar of missiles is at hand, aiming every which way, is mutually assured destruction not far away? Whither humanity?

The showdown on the Korean peninsula presents no easy choices. Even the brightest, most judicious leader would be vexed with the nuclear-tipped provocations of Pyongyang, but is lazy thinker like Trump up to the task?  Putting the nuclear football in the hands of an incurious but impulsive man who is petulant and quick to take offense puts the world order as we know it on the line.

Russia, answering years of US meddling on its borders, has put the US on a Cold War footing with a sly psy-ops campaign that sought to sow discord in an already divided nation, perhaps nudging Trump to victory. Yet Democratic Party outrage at “Russian interference”--which is said to have included hacking, phishing, leaking to Wikileaks and buying up Twitter and Facebook ads--rings like revenge served cold. Perfidious or not, Russia’s uncanny detection of social fault-lines and manipulation of the Internet is a backhand complement to US political practice. Hillary Clinton’s team of so-called “humanitarian interventionists” were no slouches when it came to the dark arts of using misinformation and social media to exploit, enrage and exploit civil discord in places like Libya, Syria and Ukraine, egging on violence. Or to paraphrase America's egotistical Secretary of State, self-styled role model to young girls everywhere, on the push for regime change in Gaddafi's Libya, "we came, we saw, he died."

The tools of media manipulation are new, but there’s nothing new about playing one side off the other. The British did it everywhere in their empire, Burma being a classic case, rift to this day with sharply-drawn colonial era ethnic divides, and domino-dealing America soon followed suit.

Even now, the US continues to divide and conquer with interventions in the far abroad (precisely the sort of thing America would never tolerate closer to home.) Whether cheering on militant ethnic groups in China at the expense of Han-dominated Beijing, or “moderate” Saudi-funded rebels in Syria, or conspiring with Ukraine and other former Soviet republics to rile Russia, the finger-wagging humanitarian interventionists have much to answer for.

Trump may be impeached, then again maybe not.

In the meantime, a nervous world nervously awaits his next tweet.