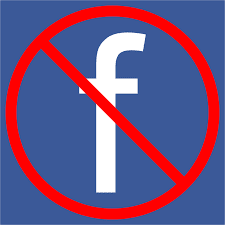 
In retrospect, China did the right thing by saying “no thank you” to Facebook. When gregarious Internet evangelists come bearing gifts, it is probably best not to take their wares or let them in the door. Give 'em inch they'll take a mile--and trample on national sovereignty, too, if profits and power at stake.

Saying no to the latest in foreign invasive technology, as sensible as it seems now, hurt China's image several years back when America’s Internet darlings could do no wrong. When Beijing blocked Facebook and Google, there was a great media hue and cry about “freedom,” and barriers to trade, but almost no talk about how the Silicon Valley giants not only work hand in glove with the CIA and NSA, but serve as formidable intelligence agencies in their own right. Unlike their Beltway counterparts, the Bay Area operations spy on millions and rake in obscene profits with little or no congressional oversight.

The Cambridge Analytica scandal is a perfect storm of politics, dirty tricks and data abuse; the way they took charge of Donald Trump’s digital campaign is and shall remain a potent reminder of what goes wrong when the “friends” and “likes” of Facebook accounts are used to divide, confuse and disenchant large portions of the electorate.

After years of hemming and hawing and foot-dragging on key question of keeping private data private, the latest flurry of half-apologies and last-minute public relations push does nothing to fix the core problem. The core business model of Facebook is collecting, exploiting and selling data. The data is manipulated and massaged mainly to serve advertisers--but nefarious political operators such as Cambridge Analytica have been clients, too. Facebook faces no serious oversight, it has long ignored complaints about privacy violation, and it lacks adequate checks and balances to correct itself.

Violation of privacy is key to Facebook’s rise and imminent fall. It’s what happens when a greedy company led by a greedy man can’t get enough and wants more and more and more, without concern for the privacy of others, without thinking through the consequences. Mark Zuckerberg has gone to great lengths to curry favor with Beijing authorities, from jogging in the smog at Tiananmen Square to memorizing Mandarin phrases, all to no avail. Chinese analysts rightly surmised that Facebook was a Trojan horse that they could do without, despite every outward appearance of being a gift.

As First Lady, Hillary Clinton trumpeted the expansion of the Internet in China. Working as a freelance reporter during President Bill Clinton’s Beijing visit in 1998, the bubbly enthusiasm for all things Silicon Valley was palpable within the US delegation and Hillary was at the center of it, courting young Chinese web users with memes of “freedom.” As Secretary of State, she continued to pitch pretty words about free expression to promote the case for Facebook, ignorant or unconcerned about the fact that Facebook was making the world a less safe place.
As a candidate for president, she was at times ruthless, deep-sixing fellow Democrat Bernie Sanders as her campaign availed itself of dodgily sourced information, because in politics, information is power. Dirty data collected online, offline and even in hotel bedrooms by retired spies and sleuths helped produce the infamous Steele dossier.

Call it blowback, call it karma, but America’s leading Internet evangelista got bit by the beast she was feeding during the home stretch of her run for President in 2016. She lost a race she had every reason to think she would win, a close race against a clownish opponent. The electoral process was tarnished by the very technology she trumpeted. Facebook ad interference and Facebook data abuse, some of it tentatively linked to Russia, is at the heart of the scandal. Since Ms. Clinton’s spectacularly unexpected defeat, she has pointed fingers every which way, missing exhibit number one; Facebook. And though its stock has dropped precipitously, Facebook is still at large, still evading responsibility while claiming to be responsible, still gobbling up unexploited markets, still maximizing and monetizing its access to the world’s secrets.

The UK’s Channel 4 expose on Cambridge Analytica chillingly suggests that the marshaling and manipulation of Facebook data can swing an election even in the most mature democracies. If so, what chance do struggling democracies stand in withstanding information abuse and fake news from Facebook and the other Internet giants?
Facebook has yet to explain how the private preferences, likes, dislikes, friends and friends of friends and information profiles of some 50 million Facebook users became fodder for political skullduggery. Cambridge Analytica, co-founded by the maverick, and sometimes gleefully malicious election advisor Steve Bannon, was funded by right-wing computer engineer Robert Mercer, both Americans. But most of the work and day-to-day operations, including, apparently, the dirty work, were based in Britain and staffed by non-Americans, which raises the question of foreign interference. Manipulated data and dirty tricks also tilted one of the most consequential polls in European history, the Brexit vote in favor of Britain’s withdrawal from the European Union.

There’s an irony in the US government crying foul to foreign meddling in US elections when the US government has a history of meddling second to none. But the vulnerability of free and open societies to cash-driven influence-peddling hits close to home. It raises the question of the role that a billionaire like Mercer can play in throwing the outcome of a national poll or plebiscite. If the US and Britain, two exemplars of modern democracy can so quickly lose their way under the triple threat of targeted ads, divisive messaging and dirty tricks, what hope does anyone else have to withstand a similar onslaught?

Recent revelations will almost certainly lead to more shockers, (watch out, Google!) but the Cambridge Analytica data harvesting case is enough to validate the view of those who didn’t like the "likes" of Facebook and Google colonizing and exploiting the information ecology of China. China can watch Facebook explode and collapse with a certain Schadenfreude, but it’s nothing to be smug about since China also has to wrestle with the issue of data security while taming the influence of its own home-grown Internet giants.

Internally, the US and China face similar challenges on how best to manage a vast information ecosystem, but for the moment at least, China can watch the Facebook smack-down with a sigh and say, “I told you so.”

NO MORE THAN TEN FOREIGNERS... 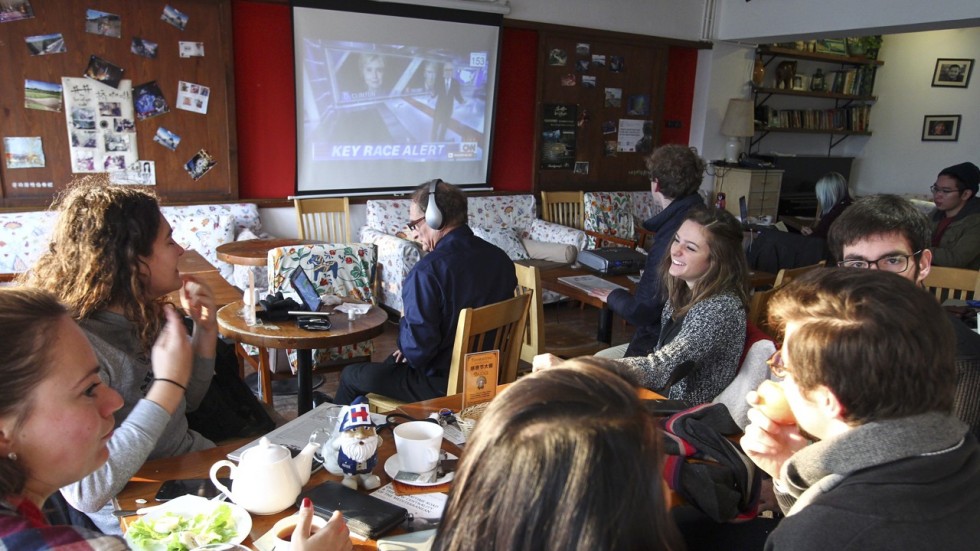 Beijing’s ban on gatherings of foreigners in restaurants raises eyebrows, and questions


Philip J Cunningham says Beijing’s ban on foreigners congregating in restaurants may be rooted in the fear that they could be a terrorist target, but clampdowns based on racial differences come across as intolerant

The pride of foreigners living in Beijing has been injured by the prejudiced policy of restricting foreign entry to certain bars and eateries for the duration of the National People’s Congress in Beijing. The question remains whether the clumsy policy, geographically isolated and not widely enforced, is a misunderstanding misconstrued as prejudice, or an act of prejudice wrapped in talk of security concerns. Either way, the mini crackdown has touched a raw nerve, and for good reason. If what appears to be happening is for real, it does not bode well for China’s future, even if it is only a temporary measure.


Any time authorities start setting up roadblocks to free movement and association based on racial identity, or just “differentness”, alarm bells start ringing, especially to Westerners who cannot and should not forget the horror of the master lesson provided by Nazi Germany. Growing up in a largely Jewish area of New York, I learned to be vigilant in the face of prejudice and intolerance, even in petty acts, and even in isolation. Working in China and Japan taught me that prejudice is real, but also imagined. It gets magnified by one’s minority status. Sometimes it is malevolent, sometimes inadvertent and unintended. 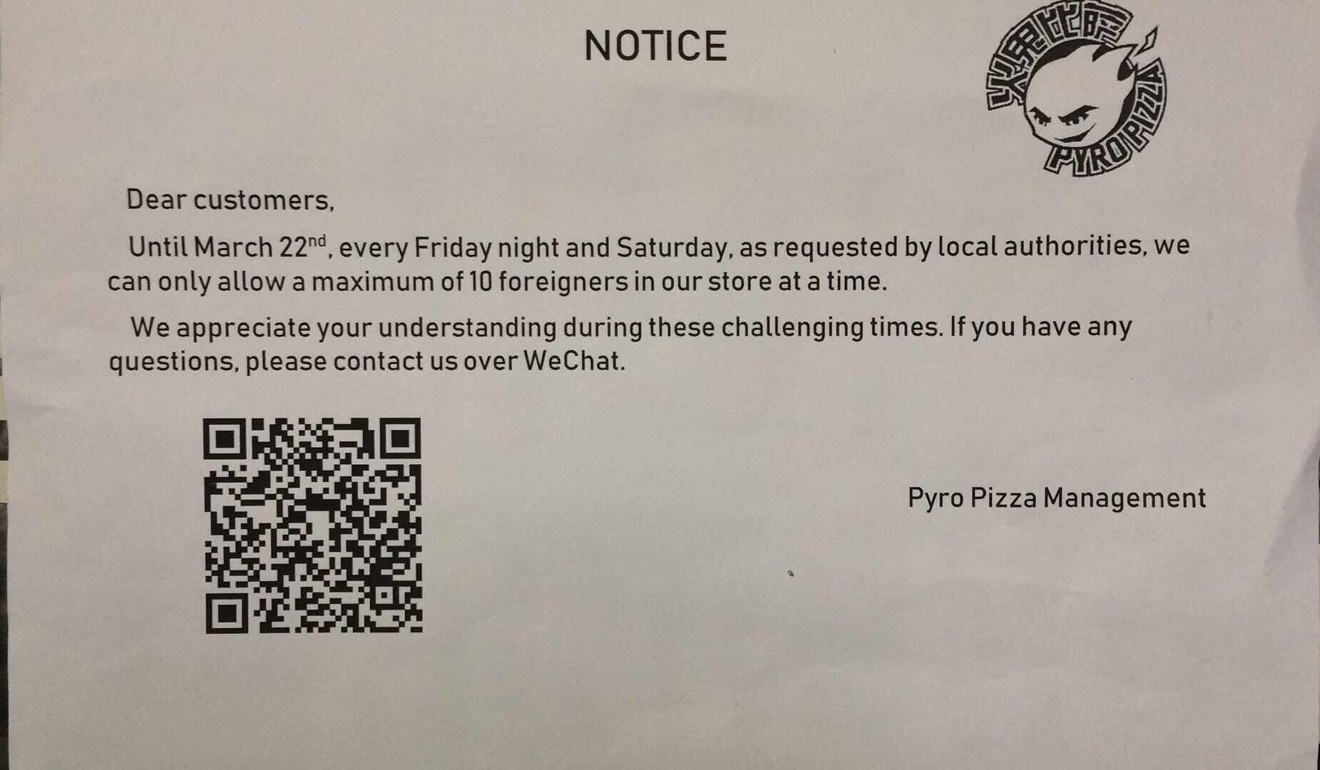 “Pizza-gate” is about as petty as a potentially disturbing crackdown can get. Only a handful of Beijing bar owners posted signs limiting foreigners and it was made clear it was for a short, designated time frame. But the damage was done, because foreigners in China, like elsewhere, are hypersensitive to exclusion. Foreigners in China often feel excluded, even under the most welcoming circumstances, if only because of the yawning gap of language, culture and social differences with the host country.
The clumsy edict proscribing attendance of “more than 10 foreigners” is the crux of problem. What is a foreigner in this context? Is the “security” measure directed primarily at Caucasians? Asians? Chinese holders of foreign passports? Why 10? Who’s counting? Who defines what foreign means?
The irony of this public relations disaster is that the measure may have been well intended, based on police intelligence. During the politically sensitive Two Sessions period, all sorts of restrictions are in place and ordinary Chinese citizens bear the brunt. For most Beijingers, it is like a bout of bad weather, you shrug it off knowing it will not last. Annual meetings are part of the pattern, so are big holidays and international events, such as the Olympics.

This sort of cyclical self-policing has a long history in China, but it might seem irrational or offensive to observers who see the law as a constant, not something that is over- or under-enforced according to whim.
The unspoken fear in the current context is terror. Singling out innocent foreigners to maximise global media coverage is a tactic that has been the hallmark of al-Qaeda and other Islamist groups. The bars singled out have a long history of being popular with foreigners. In the eyes of the perhaps too-cautious police, such venues are also potential targets. The fear is not of what happens when more than 10 “conspiratorial” foreign students get together, but of a lone wolf attacker intent on sowing confusion and hate to get maximum publicity. Could you be a ‘high-end’ foreigner? China offers 10-year free visa to top talent

Even so, it’s not a good idea to single out foreigners without explanation. It is better to close the entire venue for the duration of the threat than to ban entry by race or appearance.
The temporary ban is hopefully not a sign of more prejudicial things to come. Beijing expats have responded with humour and sarcasm, but the move has raised eyebrows in foreign capitals. Given the current mainstream media mood that sees every little dispute between China and the West as a clash of civilisations, it is possible for something inadvertent and petty to be misconstrued as evidence of growing fascism. A kerfuffle it might be, but it has already lent weight to the litany of more serious complaints about China in the world media.

PHILIP CUNNINGHAM IS THE AUTHOR OF TIANANMEN MOON
on March 19, 2018