TIANANMEN: 29 YEARS AND COUNTING: HOPE AND HISTORY OUT OF TUNE 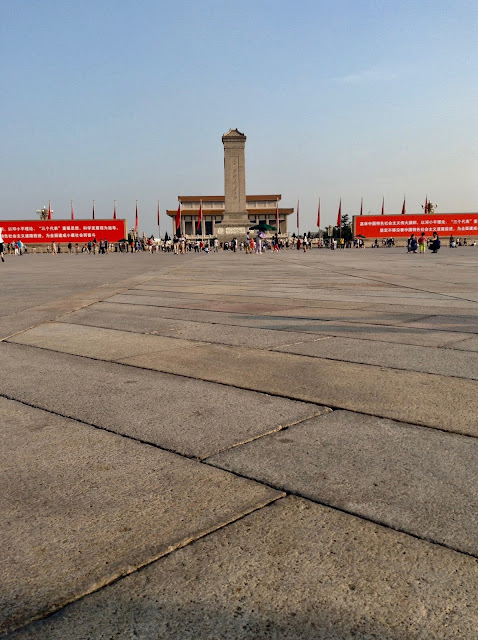 The tyranny of our decimal number system and ingrained media habits have as much to do with the thundering silence about the June Fourth anniversary this year as the tyranny of China’s ruling party and propaganda apparatus. Anniversaries generate more sympathetic vibrations in even-numbered years than odd, and decades carry a resounding clout of their own, at least in media terms, so it’s unlikely much news will be made of 29th earthly orbit since the tanks stormed into Tiananmen Square.

But for someone who was there, or moved by the historical moment, the events that unfolded in Beijing in 1989 are too worthy to forget, even in an off year. As one in a sea of a million who observed and participated in the 1989 student marches and occupation of Tiananmen Square, I can’t help but think about it, even if big media gives it a miss. The uprising was at once terrifying and inspiring, coarse and refined, disheveled and beautiful. It was of a scope and scale beyond forgetting, it continues to shock and inspire in a way that transcends time.

In years past, I have visited the fabled square in central Beijing on or about June 4, looking to reconnect with an event that has been all but erased by a formidable propaganda apparatus. It’s invariably a gloomy day, even under blues skies and bright sunshine, and one feels oppressed and hemmed in by security forces that equal or exceed the number of civilians padding around in uncertain silence. To get inside the square I had to show my passport, visa and was subject to a screening as stern as that in many an airport, and then I was watched, on camera and in person and by roving security vehicles for the duration. More than once I’ve gone to the epicenter naively thinking I might run into people who had been there; middle-aged men and women who might have been among the youthful participants clinging to the Monument to the People’s Heroes a quarter century before, but this demographic has not been much in evidence. I did see a few young families who let their children run around freely on the square, a sight delightful to the eye until one realized we were inside a fenced in, gun-guarded open-air cage akin to a giant prison yard. Given the dour and antiseptic mood, the sight on a toddler urinating in the middle of the square provoked not disgust but amusement, a little act of rebellion in the face of invasive policing.

I studied the paving stones, pieced together like the world’s biggest jigsaw puzzle, and tried to imagine the patter of millions of feet, cheap leather shoes with worn out soles, torn and dirty sneakers, and flimsy sandals suddenly replaced by boots, rifle butts and the crack and crunch of heavy tank treads.

Even under the all-encompassing control of China’s security services, Tiananmen remains a vulnerable position. It’s partly the geomancy of the place, smack in middle of the capital city, open to traffic, the elements and the sky. When it’s empty, it begs an audience, it exists to be filled. This geospatial quality so worried the harried inheritors of post-crackdown Beijing that it was proposed internally that Tiananmen Square would forever present a risk to the party unless it was filled in. Luckily, they didn’t pave the Gate of Heavenly Peace to put up a parking lot, or a Pentagon-sized building, but it is run like a prison.

The open square is important to the superstitions and self-respect of those in power. It may be shaped like a giant rectangle, but it functions like a huge parabolic mirror seeking signals from the heavens. It’s the place where the mandate of heaven is transmitted.

To remember June 4, 1989 is to mourn a massacre, but it is also important to remember the joyous days of May, the life-affirming joy, the vivacious celebration of youthful dreams. It was this, not the bitter fourth, that sent a tectonic wave of hope and yearning for reform that rocked Eastern Europe and eventually led to the break-up of the Soviet Union.

Given the apparent distance that Xi Jinping has been willing to put between himself and his predecessor Deng Xiaoping and Jiang Zemin in policy terms, is it unreasonable to see in Xi’s rise, and in the concomitant decline of the pro-crackdown faction, hope for an official reversal of verdicts?

It won’t come easy. The Chinese political landscape remains embedded with old-time hardliners who refuse to acknowledge the truth because their legitimacy is built on a lie. That’s why the topic of Tiananmen 1989 remains politically toxic and almost entirely taboo even if it is self-evident that the use of tanks and guns to murder innocents was not necessary to ensure stability, nor was it a key to the prosperity that followed.

The uprising was spontaneous in the best and the worst sense of the word; set off by an untimely death, it was disorganized, full of contention, raging with factionalism and a big, messy, confusing maelstrom at times. But it also had its sublime moments, no more so than when the crowd reached a million and city traffic halted and crime came to a standstill and food was shared for free and no one hurt anyone. Even the police and soldiers, party members and government operatives alike were admirably restrained, if not in some measure moved, by the bold, blooming human tableau entirely at peace. It was only when Deng and the hardliners divided the Politburo with the call to crackdown, forever sidelining conciliatory leaders such as Zhao Ziyang, that bloodshed was a foregone conclusion, and even then, some elements of the military wavered.

Tiananmen Square was ground zero for a mighty wave that whipped around the planet like a raging tsunami, upending Soviet-style regimes everywhere and dissolving communist parties in all but a handful of hardened sites outside China, such as North Korea.

The amazing acts of courage and sacrifice, the awesome logistic achievements and crowd-shepherding success of amateurs in action confer upon Tiananmen a legendary aura. Too big and sprawling an event to commemorate just one day a year; it deserves an entire season of reckoning.

The 30th anniversary will be one to watch and not just because of the expected media pile on. The longer it takes China’s ruling party to come to terms with Tiananmen, the harder it will be to hold on to what’s left of the tattered mandate of heaven.

The author has contributed to documentaries about Beijing in 1989 for BBC, ABC, TV Asahi and the “Gate of Heavenly Peace.” His first-hand account of the Chinese student uprising is described in “Tiananmen Moon” published by Rowman & Littlefield.
on May 31, 2018