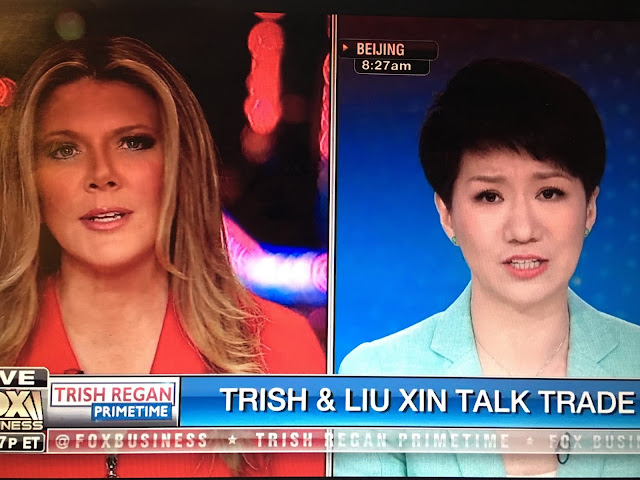 The much-anticipated May 29, 2019 “debate” between an anchor from Fox Business News and a counterpart from China’s CGTN, better known as CCTV, was more of a letdown than a showdown, but it usefully illustrates some of the dynamics at work in Sino-US sparring. The debate was more about style than substance once Trish Regan recovered from her opening gaffe that incorrectly characterized her counterpart Liu Xin as a communist party member. Neither yielded to anger or got unduly flustered. They each put on a good show of deferential broadcast manners, a good show of little political significance.

Trish Regan and Liu Xin are both television professionals, and while their on-air styles vary wildly, one coming off as soft and seductive, the other prim and proper, they both instinctively know that looking good is part of the job. Not just in terms of makeup, which nearly all TV presenters, female and male alike, have to apply to compensate for unnaturally bright artificial light of the studio, but in terms of composure and good humor, winking to their fan base, playing to the crowd.

I should know. I’ve been in the CCTV hot seat, in the same Beijing office where Liu Xin first started work. As a frequent guest and freelance “global affairs commentator” on CCTV’s long-running “Dialogue,” I enjoyed sparring with host Yang Rui, who modeled his show after BBC’s “Hard Talk,” and liked to think of himself as a tough interviewer. A consummate professional, he did his research and was well-prepared for every show.

But as a party member--an affiliation Yang Rui was so proud of he made a point of telling me about an emotional visit to the grave of Karl Marx in London—he was hemmed in. He could dish it out, but he had to stay inside the box. I quickly learned not to be offended by his sometimes strident and accusative style, partly because it was a kind of role play--in sharp contrast with his warm and congenial demeanor before and after the show--but also because it was a cue for me go outside the box and talk about things in terms that were not available to him. He could set the tone with party-line questions, and I could answer with the implicit subversion of an individual answerable to no one.

Resident in Beijing when the administration of Bush Jr. was about to launch its war on Iraq, I was grateful that CCTV was willing to air my views about the “wrong war for the wrong reason at the wrong time” at a time when much of the US media was banging the war drums. If anything, I was more critical of US policy than the Chinese pundits, if only because I cared more. The follies of US foreign wars were but egregious own-goals in a spectator sport for a nation at peace.

Sometimes I found myself standing to the left of Yang Rui on China issues as well. When he gave me a pre-scripted list of “outstanding Chinese” from which to name the “Man of the Year” (Bo Xilai and Yao Ming were the top contenders) I demurred. “How about the coal-miners?” I countered. The workers suffer such hardship, their sacrifice helps put on the lights in this studio. The host went silent. It’s hard for a man who wept at the grave of Karl Marx to argue with communism.

Although Yang Rui was familiar with my passionate involvement in the 1989 Tiananmen demonstrations through talk, texts and film, I was only able to reference the event on air once during the 2008 Olympics. I had already suggested that the Dalai Lama should be invited to talk on Dialogue which provoked a wry smile and sent a few eyebrows flying, but when I breached the topic of Tiananmen, things went cold. I got only as far as saying something about the beauty red flags waving under the red sky, the inspiring, peaceful sight of seeing so many people in the street. Admittedly my comment was off-topic, so it was no surprise that the conversation was quickly roped in and redirected back to "soft power"or whatever the frame of the day was.

It’s hard to argue against a party line, so I could relate to Trish Regan's need to devise a narrative strategy to dislodge the orthodoxy of a state broadcaster. I picked up on this dynamic right away when she tried to box Liu Xin in as a party member. A strategic misstep, because in Liu Xin’s case it was technically untrue. Not that it takes a card-carrying affiliation to toe a line, of course, which Trish Regan should know as a loyal member of the Fox team. Neither she nor Liu Xin showed a willingness to deviate far from their respective editorial lines. Or to put it more cynically, you don't bite the hand that feeds. 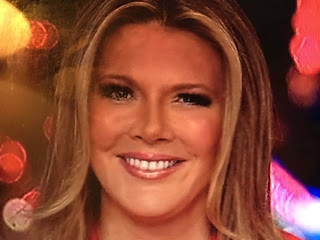 The former beauty queen from New Hampshire fluttered her false eyelashes and pursed her cosmetically-glossed lips with aplomb, but she showed a weak command of the issues. She’s not savvy about economics or world politics and when she wings it,  she runs the risk of sounding like Trump on a bad hair day; her recent excoriation of “socialist” Denmark, pairing it with US-regime-change-flavor-of-the-month Venezuela, being a case in point.

Though anchors at TV stations like Fox work in an environment that offers constitutionally-protected free expression, this huge leg-up on the ritualistic, Leninist-style broadcasting favored in China is eroded by US partisan politics, insidious commercialism and low-brow populism. American network and cable news alike feel the need to entertain and manipulate around the clock, pandering to ever-narrowing niche audiences. How far US news standards have fallen since the days of no-nonsense coverage that addressed the nation as a whole, when journalistic legends such as Edward Murrow and Walter Cronkite saw the truthful, autonomous and sober delivery of news as a civic responsibility. The news was never meant to be a cash cow for commercial sponsors.

As someone who has worked in television news for networks on both sides of the Pacific, I would not hesitate to say that American TV has generally gotten worse and Chinese TV has generally gotten better. It does not surprise me that Regan and Liu were able to meet as co-equals in this battle of the brands. Indeed, in this feeble contest at least, the Chinese side had a slight edge, because it’s hard to answer questions without talking policy, and Liu offered more gristle for thought than the airy and condescending Regan.

Fox News is not state TV, but it panders to jingoistic instincts and has been a relentlessly partisan supporter of Trump. The US President, in turn, is the TV station’s biggest fan, and looks to Fox rather than his intelligence briefs for his understanding of the world. This mutual admiration feedback loop has a craven, authoritarian flavor.

CCTV is state TV, but that is not the crux of the problem; after all BBC, and even Japan’s NHK, have done good journalism under nominal state control. But China’s news ecosystem seems to be changing for the worse.  I was a regular guest on CCTV during the free-wheeling Hu Jintao years, a relatively open time for Chinese media, and have since spoken out against the tightening of controls. It is regrettable to see a network that was moving in a cosmopolitan direction and keen on reform to suffer the editorial setbacks it has, and plain shocking to see it used for the airing of forced confessions.

If the Regan-Liu “debate” didn’t live up to the hype redolent of a prize fight, at least it was a step towards talking. Xenophobia is sweeping broadcast entities on both sides of the Pacific, but the dialogue must continue. It’s not good for CCTV to muffle itself as mouth of the party, nor is it good for US TV ownership to be in the choke-hold of a few billionaires. In both cases, a few men shape the news for the many. One need only consider the political clout of Fox News owner Rupert Murdoch to see how pervasive the influence of a non-elected magnate can be.

In the meantime, the Twitter quarrel of two news anchors has provoked broadcasters on both sides to up the exchange, both in terms of decorum and audience, and that’s a good thing for Sino-US relations.
Simple theme. Powered by Blogger.