A CLASH OF LANGUAGE, POLITICS AND SECURITY AT THE OSAKA G-20 SUMMIT 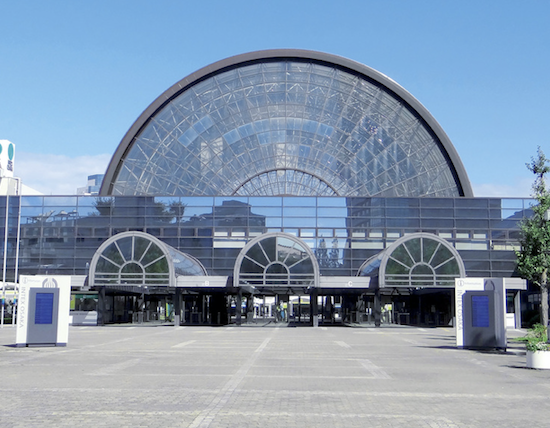 The Osaka G-20 summit will be held inside a vast exhibition center on a dreary, nearly treeless man-made island located in the industrial port area of Osaka, Japan’s third largest city. The physical isolation and limited bridge access of the concrete venue better known for automotive shows is a plus for the complex security and logistics of a summit where some of the most powerful people on the planet will convene at a time of rising tensions.

Japan takes it security seriously, in ways both circumspect and petty, so not only will it dispatch something close to 30,000 police to man the summit, but it will seal up countless city trash receptacles of the sort that help keep Japan so neat and litter-free with a terse warning that reads:

“Due to special vigilance, Trash box can NOT be used.”

The signage is trilingual with a twist; there’s English and Korean and then there are Chinese characters. The only “Japanese” writing on the sign comes in the form of a truncated notice rendered in large kanji which can be read by readers of Chinese as well. As if to drive home the point that “Chinese” is “Japanese” when used by Japanese in Japan, a longer explanation is offered in Chinese for Chinese at the bottom of the placard, explaining that the sealed-up trash can is not in use, a statement so obvious that it goes without saying in Japanese.

The focus on making foreign languages prominent in the posting is somewhat odd in a prefecture of 8 million Japanese, and it could be said to point to ethnic typecasting, if not outright discrimination, since similar multilingual notices frequently appear in police warnings, convenience stores signs and on security notices, much in the way Spanish is unevenly deployed by US agencies.

The sign’s layered linguistic signature offers a concise demonstration of how history, logistics and politics collide: China, long the culturally-dominant country of the region, bequeathed a writing system, at once beautiful and infuriatingly complex, to its neighbors. Japan respects this legacy, in strictly cultural terms, and continues to use, within proscribed limits, many hundreds of Chinese characters in everyday writing. Korea once did, too, in tandem with its own hangul system, but in recent times, both halves of the peninsula, north and south, independently discarded the use of Chinese ideographs as a show of nationalism.

The proliferation of trilingual train station signage is recent, and it is more noticeable in the ethnically diverse big cities than in other parts of Japan. While it is a double-edged sword in terms of effect--does it serve to include or exclude?—the intent is charitably understood as an emblem of embracing diversity, a welcome gesture after years of concerted rejection and neglect.

As for the use of Chinese, which also shows up in dubious public notices and police warnings, many similarly complex historical issues linger under the surface, but unlike Korean, Chinese has a strong claim to being an international language, akin to English.

The Osaka summit will host delegations from over 30 countries, but as the security signage suggests, it’s the China-Japan-Korea nexus that cries for attention in this age of waning US dominance.

The summit expects 30,000 visitors, almost matching the number of police dispatched for the event, so train stations in downtown Osaka will be under the watchful eye of authorities even though the convention center and meeting halls are held on the edge of the city by the bay, not far from the world-class Osaka aquarium.

The G-20 membership includes include Argentina, Australia, Turkey and much of Europe, but all eyes will be on the US and China, two great powers in the midst of a serious trade tiff and perhaps on the cusp off an all-out trade war. But it’s not just a bilateral show, however, and Japan will make its presence and views known with the prerogative of being host.

South Korea will be in attendance, North Korea absent. But China president Xi Jinping’s hurried visit to Pyongyang just days before the summit reinforces the likelihood that the North Korea question will be on the table.

Beijing-Pyongyang relations took a dive when North Korea, heedless of its big neighbor’s advice, continued to test ballistic missiles and even an atomic device. Since then, Beijing and Washington hold a more-or-less shared vision of denuclearizing North Korea, but have different ideas on how to get there.

The “grand bargain” of the Trump administration is now being pitted against the “suspension for suspension” plan favored by Chinese diplomats which calls for a US war games halt in exchange for a weapons test halt.

Trump wants no easing of sanctions until the nuclear program is killed, but this kind of all-or-nothing thinking effectively sank the Hanoi summit, whereas China is willing to countenance a loosening of sanctions, including localized cross-border trade and humanitarian aid so long as North Korea takes no provocative steps forward in flexing its military muscle.

Neither the US nor China want North Korea to get between them, but that is exactly where the wily diplomats of the North, seeking a hedge against domination, want to be. There's a provisional autonomy to be found in playing one big power off the other, while studiously ignoring Japan.
The result is a complex imbroglio in which US-China trade, North Korean sanctions and Japan’s fears of proliferation are tangled up in one big knot.

The Osaka summit offers an opportunity to cut the knot. Diplomats could begin to address each of these critical issues on intrinsic merit, but more likely is the possibility of back-room horse-trading, even though the issues at hand are so different they might as well be horses of a different color.

Fresh out of Pyongyang, where he was treated to a sentimental journey of orchestrated crowd frenzy worthy of the Mao era, Xi Jinping will not arrive in Osaka empty-handed. He probably possesses the leverage to arrange an assist on US-North Korea weapon negotiations, likely in exchange for the US president backing down on the ruinous unilateral tariffs impeding bilateral trade.

Trump, keen on securing a win for his tattered foreign policy, which is additionally burdened by the eruption of military brinkmanship with Iran, might be willing to trade tariffs for nuclear containment so long as the face-saving fiction is maintained and sustained, mainly for his base back home, that he got a good deal.

The Osaka Summit portends to be a meeting of historic import, but it is too soon to say if it will mark the bright sunrise of a new order or the murky sunset of the old one.