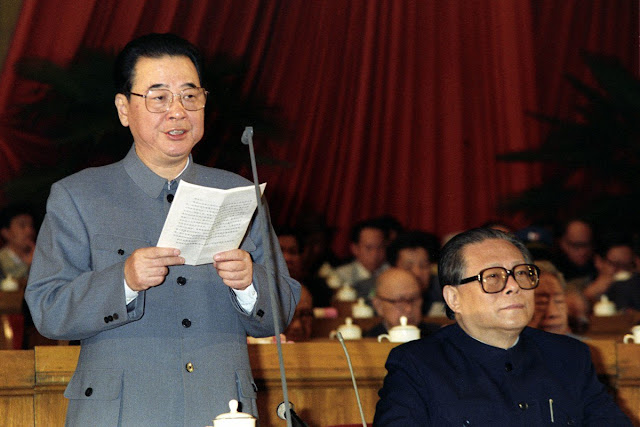 Li Peng was not the butcher of Beijing, but he certainly was an embarrassment. Awkward and homely, bumbling and bashful, he was a loyal apparatchik pushed far above his own meager talents, a tech nerd out of his depth playing a wholly inappropriate political role at a critical historic moment. The protesters on the streets of Beijing in the spring of 1989 loved to hate him and hit upon him and it was not hard to see why, even if he was picked on for the wrong reasons. His imperious, impatient airs, his unbridled arrogance made him a natural target, doubly so because he was under the command of a rather more charismatic, competent and difficult-to-criticize man.

I can still hear the echoes, the chorus of the crowd marching up and down Chang An Boulevard shouting “dadao Li Peng” over and over. The audio effect of the “down with” slogan grew rich in cadence with repetition, like a nightmarish tape loop, but not without a note of churlish fun to it, too.

Li Peng might have been Prime Minister, but he was not the master of his own domain. He was a tool of the party, a toady of Deng Xiaoping. By all accounts he was socially awkward, if not unlikeable, but he was not a decider. In the multitudinous student-led crowd that formed daily around Tiananmen Square during the prolonged peaceful uprising, there was a kind of collective wisdom, but also a penchant for collective folly.

The crowd, for all its courage, never got in the habit of shouting “down with Deng Xiaoping!” because Deng’s tough, thick-skinned persona did not lend itself to bullying. He was more powerful than Li Peng, which was one consideration, but he was also a no-nonsense sort of man, a man who might be slow to react but whose decisions, sent down the chain of command, had consequences. Opposition to Deng was tacit but unspoken. The closest the protesters came to confronting Deng directly was the passive-aggressive (and plausibly deniable) show of breaking little glass bottles, homophonous with his name. Even the long-dead Mao was treated with more reverence by the rebel students than the hapless prime minister.

Li Peng was disliked for his hard-line stance on education, work assignments and study abroad, all of concern to the restive students, but he was criticized because he could be criticized, precisely because he wasn’t the toughest kid in the sandbox; you could get a rise out of him because he was ill-tempered, thin-skinned and quick to take offense.

So why did the reticent, mild-mannered Li Peng become known as the “butcher of Beijing?” The phrase, at once alliterative and catchy, falls off the lips with a resonance reminiscent of “dadao Li Peng” but it is less honest and less accurate. It was a Western media meme, and a catchy one at that, but it obscured a reality that was plain for Chinese people to see. Li Peng was Prime Minister, but in China’s communist system, the prime minister is not only not the man in charge, but not much of a leader in any meaningful sense.

Premier Li Peng was a subordinate, a factotum, a put-upon prude and snob, but he was not in a position to give orders to kill protesters, though it is to his ever-lasting shame that he embraced the worst impulses of his boss and did not resist the crackdown as his rival Zhao Ziyang did. Li Peng’s perfidy as eager enabler kept him tucked away in the high castle of power, and he no doubt lived a life of great material comfort, but history will be far kinder to Zhao Ziyang. Unlike Li, he stood up, albeit rather late in the game, and though he was sentenced to spend the rest of his life under house arrest, he earned the affection of a battered populace and the muted admiration of his peers.

Li Peng was the kind of man who just couldn’t win, even when he meant well. Not only did the protesters love to hate him, but his communist colleagues kept their distance as well, relegating to him the role of scapegoat for a decision made at the pinnacle of power. He wasn’t thrown under the bus, he wasn’t even thrown off the bus, but he had to sit in the back with his hands folded and do as told. He had to embrace the reforms he opposed at heart. He wasn’t his own man anymore, not that he ever was.

He tried to say as much in his own words, but his book was banned in China because it went against the prevailing narrative enshrining the wisdom of Deng. The hapless Li never succeeded in convincing people that he had been doing Deng’s bidding when he did his worst, even after Deng died. Li Peng was an enabler and facilitator of Deng’s will, and although the loosely-documented and slyly pro-Deng depictions of the 1989 elite power struggle in the so-called “Tiananmen Papers” might suggest otherwise, I take Li Peng at his word for it.

One of Zhao Ziyang’s most serious offenses in the tense weeks before the crackdown was not his soft-line on handling student protest, but the shocking admission, in the presence of Mikhail Gorbachev, that Deng Xiaoping had not really retired and was the true power behind the throne. Zhao, as head of the Communist Party and Li, as Prime Minister, were there to serve at Deng’s pleasure.

Zhao Ziyang was torn between his loyalty to the party—personified by Deng—and his loyalty to a conscience weakened by years of political battle. He was not alone in the party, a number of prominent leaders, including Xi Zhongxun, and even hardliner Chen Yun, expressed reservations about Deng Xiaoping’s violent course of action. It would be good public relations for the party to reveal more about the well-placed communist leaders who disliked Deng’s decision to deploy the PLA in the city.

Through such revelations, a modicum of human decency shines through.

Li Peng chose discipline and compliance, strictly sticking to the values that shaped him. Perhaps, as he later claimed, he saw the protests as an existential threat to the party, and indeed his own career, but not following Deng’s line would have been a career-ender, too. On the surface, he remained in the heights of power, but in reality the only power he had was to continue serving the party as a patsy, even if that meant slumping under the weight of a bad decision made by someone else.

Li Peng’s unscripted televised meeting with student firebrand WuerKaixi in response to the May 1989 student calls for dialogue offers a glimpse of a man out of his element. Premier Li had achieved high position not just through powerful political connections, but through obsequiousness to higher ups, observing in his own rule-bound existence the demands of rigid hierarchy, party discipline, and top-down political etiquette. It was only natural to him that a ragtag handful of nobody students from nowhere should listen meekly at his feet while he hectored and humored them with avuncular advice, especially that impertinent kid from Xinjiang.

Li had been up so long he didn’t know what down looked like. His clumsy outreach, as doomed to fail as the similarly ham-fisted “sock-it-to-me” Nixon when in dialogue with “rebellious” American youth went nowhere, even if there was a measure of sincerity in his befuddlement. At one point, Li even evoked a comparison with his own children, and claimed, at once tellingly and pre-emptively, that there was no corruption to be found in his family.

The TV dialogue was clash of personality and style between the cosseted scion of old rebels and new rebels in the flesh. Li was too defensive to listen, to square to engage, too haughty to learn. He came off looking bad, deservedly so, but what did it matter? A crackdown was coming, a crackdown he loyally embraced and came to be the symbol of, not because he was the author of it, but because that was the role he was assigned to play.