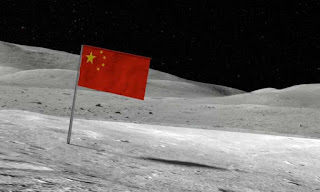 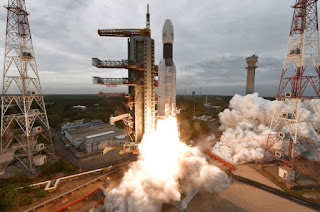 A new space race is taking shape as China and India flex technological and scientific muscle on the fiftieth anniversary of the first moon landing. China has a robotic probe on the far side of the moon, and India has a multi-staged lunar lander on the way.

In this spirit, the space race between the two giants of Asia can be welcomed to a point, but the uncomfortable flip side of advanced science, especially with regards to rockets, is its military application.

The march of science must continue, but a consensus between space-faring nations needs to be reached to keep the focus on exploration and advancement of the human condition.

The latest launches by India have prompted Chinese news commentators to express fears about the militarization of space. This is not without justification; after all, India devotes a portion of its ballistic expertise for targeting a nuclear-armed neighbor with which it has long been at odds: Pakistan. China is developing dual-use technology as well, and more recently US President Donald Trump introduced the idea of a military “Space Force.” It’s becoming clear that space is no longer just an area of exploration. One reason why it is hard to cheer on North Korean efforts to send a satellite into space is the fine line between a projectile launched to achieve orbit and a space-scraping projectile designed to carry a warhead for a rapid return journey to our home planet.

All told, a dozen men have walked on the moon. The US Apollo program brought about a flurry of tentative footsteps between 1969-1972, and then the lunar dust settled, and the stark surface got lonely again.

China, the third nation to enter space, managed to launch the Dong Fang Hong “singing” satellite under the direction of US-educated Qian Xuesen, despite considerable turmoil at the height of the Cultural Revolution in 1970. The project was the culmination of the “two bombs, one satellite” program of scientists who were largely insulated from the havoc of shifting political tides, but ultimately, stormy domestic politics put serious space dreams on ice.

Meanwhile, the US and Russia coasted on their laurels, focusing on manned missions for the space station and unmanned missions everywhere else. Since reform and opening-up, China has become a serious contender with the money and the political will to make a difference. It is regrettable that China was deliberately excluded from participation in the so-called International Space Station, and it is understandable that a country so excluded should want to double down on achieving space records of its own going forward.

More recently, India has emerged as a player, making strides to reach for the moon.

China’s third phase of the Tiangong space station project is well underway, and a moon mission is not out of the question given the success of the Chang’e 4 lunar lander, which made the unprecedented landing of a robotic rover on the “dark” side of the moon on January 3, 2019. The sun shines just as blindingly bright on the “dark” side of course, but because it never faces our planet, communication with the craft required the additional complexity of establishing a satellite link in lunar orbit.

India, another country with an esteemed ancient tradition of science, which bequeathed to the world the “zero” so central to digital computing, now appears to be in a position to engage in a space race with China. On July 22, 2019 it successfully launched a GSLV-MkIII heavy lift rocket from the South Indian Sriharikota launch site in Andhra Pradesh. The multi-staged rocket aims to reach lunar orbit and deliver a payload to the moon with a landing scheduled for early September.

Given the versatility of physics and the double-edged potential for military application, it is hardly a coincidence that the list of “space-faring” nations closely overlaps the short list of nations that possess nuclear weapons. Indeed, it is hard to conceive of a platform more stealthy and remote from which to unleash a deadly projectile than space.

One shudders to think of it, which is why it’s not too soon for all space-faring nations to come together under a framework that puts limits on military exploitation of the heavens and keeps the focus on beneficial science and exploration. To this end, old space rivals, the US and Russia, and new space rivals, China and India, should meet regularly to increase scientific cooperation and keep the peace. More recently, India has emerged as a player, making strides to reach for the moon. Rather than chide India for its leap into space it should be welcomed and gently “roped in” to the league of space-faring nations led by the US, China and Russia. The deliberate exclusion of an up and coming power, as was the case when China was excluded from “international” space station, is not a good example to be followed.

American astronaut Neil Armstrong famously remarked as he eased his way out of the Lunar Module and descended a ladder to the surface of the moon that it was but “one small step for man, one giant leap for mankind.” The steely calm and socially shy Neil Armstrong will be remembered as the first man to cross the threshold, but it’s the “mankind” part of his epic quote that now resonates as more countries reach the moon. Space is truly a viable destination now and that calls for coordination and “rules of the road”.

With several nations reaching for the heavens, the space race is on.
on September 15, 2019