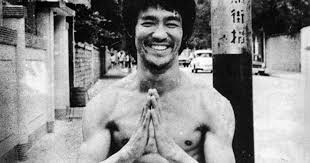 It’s a reflection of Bruce Lee’s transcendent appeal that he continues to inspire people on both sides of the Pacific Ocean 46 years after his untimely passing. The United States, China, and Hong Kong, all experiencing political tensions now, were central to his powerful hybrid identity.

In many ways, Bruce Lee is a man of the moment, a man for the paradoxical times we live in. As a fighter on and off the screen, he knew a thing or two about conflict; when to stand up, when to stand down, when to walk away.

In the 1960’s he was a first-generation jet-setter, bridging the Pacific Ocean at a time when jets had just begun to edge out the older, slow propeller planes for long-haul travel. As a Chinese man living in the US, and as an American living in Hong Kong, he epitomized the integrated “Chimerica” complex we live in today.

A bicultural exemplar, he beat a path from Hollywood to Hong Kong and back, bringing American technique to Chinese films and the practice and philosophy of Chinese martial arts to US screens, fight clubs and gyms. He inspired Chinese, still uncertain of their place in an inequitable world, to be proud of themselves, but at the same time, he also inspired people of all races with his inclusive teaching and accessible presentation of Chinese traditional wisdom.

The quibbling, quarreling world today is in dire need of the kind of rounded, yin/yang wisdom epitomized by Lee in his prime, whether it be in regard to racial harmony, the US-China trade war, or civil unrest in Hong Kong.

Born in the US, raised in refugee-packed Hong Kong, Lee returned to the land of his birth for college. He got a taste for philosophy at the University of Washington, set up a martial arts school in Oakland, and got some bit parts on American TV in LA, but it was in ancestral Hong Kong where the choreographed fists really started to fly. He brought a touch of Hollywood to Hong Kong and vice versa, presaging an age when the air routes from LA to Beijing and Vancouver to Hong Kong would be packed with multicultural businessmen and the makers and shakers of the modern world.

But Lee is best remembered as a rugged individual, a man of uncanny self-confidence whose passion for the martial arts and spiritual self-mastery was evident to all who knew him.
When American movie maker Quentin Tarantino took to the screen to poke fun at Bruce Lee by mocking his personality and martial arts prowess in “Once Upon a Time in Hollywood,” the reaction of fans, family, friends, former sparring partners and film boards was swift and furious.

Kareem Abdul Jabbar, a former student of Lee and a legend in his own right, wrote a nuanced commentary in which he defended the right of Tarantino to invent, exaggerate and distort the truth, but also went on to say, emphatically, that propagating deliberate lies and deceptive depictions of real people is not just in bad taste, but puts a blur on the historical record.

Bruce Lee’s daughter Shannon made an appeal to China’s National Film Administration not to release the film without some changes. While cause and effect has not been clearly established, what happened next put Bruce Lee’s name back in the news and millions of dollars on the line:

China cancelled the release of the film.

Bruce Lee, as played by Mike Mo, is creditable as far as these things go; there’s an uncanny resemblance and he got the accent down. True, the fists flew much too slowly to be vintage Lee, and Brad Pitt’s counter-attack was even more implausible, but that’s pretty much par for the course in Hollywood.

What critics of the film took offense to was the plot. The director used Lee as a disposable side-kick to a charming Caucasian lead. As Lee’s daughter Shannon explained in Variety, her father was forever being “marginalized and treated like a kind of a nuisance of a human being by white Hollywood, which is how he's treated in the film.” Former Jeet Kune Do master and long-time friend Don Inosanto seconded the opinion, saying Bruce hated the stereotypical “chop, chop Hollywood stuff.”

In interviews, Tarantino doubled down on a quote he wrongly attributed to Lee’s wife, about Lee being able to beat Muhammad Ali, muddying the waters further. Any chance of easy resolution was lost when Variety confirmed that Tarantino, who contractually enjoys final cut, won’t recut the film for China.

Intransigence is Tarantino’s stock in trade. His stand as an auteur who can “stand up” to China will resonate strongly, especially for his fans, and also for indignant Americans who have been primed by the jaundiced lens of nationalistic media in the US to view China as an evil empire.
If China is defending Lee’s legacy in its demand for cuts, this, too, would resonate deeply, and not just with citizens of China. This potential soft-power win, however, is complicated by the fact that Beijing bans all kinds of things for all kinds of reasons, and it is not clear why Tarantino’s film got the ax.

To add to Beijing’s conundrum, Bruce Lee’s name is being invoked by protesters in Hong Kong. Consider these dueling headlines from the South China Morning Post:

-HONG KONG PROTESTERS HAVE LOST THE PLOT: BRUCE LEE SAID 'BE WATER, MY FRIEND', NOT 'BE STUPID'

Protesters claim Bruce Lee lineage for their be-like-water street-fighting tactics, while local hero Jackie Chan has been vilified as a poster boy for collaboration with Beijing. This is an ironic role reversal from the early days when Jackie Chan, the ultimate local, saw Lee as “this overseas Chinese guy who had come in out of nowhere” to take the Hong Kong film industry by storm.

The likeness of Lee continues to pop up on tee shirts and on the so-called Lennon Walls where Hong Kong protestors post aspirational messages. No one can say for sure which side he would have come down on, but based on his sturdy east-west bridge building, it is likely he would refuse the binary choice of taking sides and look for ways out of the conflict. As Whitman said, the individual contains multitudes.

Bruce Lee retains broad appeal. A bridge between east and west in his life, driven to combat the demons of chauvinism on both sides, his spirit continues to transcend boundaries. It’s a testament to the lasting power of his ideas, and life example, that nearly half a century after his untimely death, he is still a part of the conversation.
on November 20, 2019