The last thing the confused protesters of Hong Kong need is to cheer for Mehut Ozil who is the current poster boy for critics of China’s repressive policies in Xinjiang. Even before a group of Hong Kong hot-head "democracy" activists claimed his illiberal pan-Turkism as their cause, he had already muddied the waters of serious conversation about Xinjiang. The ballplayer’s emotional outbursts and poor grasp of geopolitics make things worse for the people he ostensibly cares about.

It is fair to say that Ozil’s now-famous Twitter post, translated at the bottom, touches on issues of great import and genuine humanitarian concern, namely the massive involuntary detention of Uygur Muslims in China’s sprawling northwest province of Xinjiang.

But by wrapping his message in the flag of “East Turkestan” he has scored an own goal, greatly undermining his position on the field. Indeed, his emotional, unconsidered tweet risks damage the very cause he claims to espouse by putting the anathema of separatism on par with the necessity of social justice. 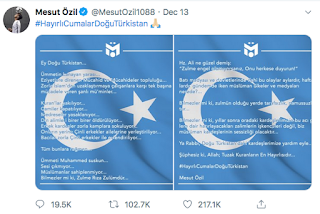 East Turkestan and its flag represent a breakaway state, the secessionists use the “Blue Flag” as their standard. To see this flag waved by Mehut Ozil and other proponents of Pan-Turkism negates the better part of his message. Sure, he cares about his “Turkic” brothers, by the same token he is implicitly calling for a civil war and indirectly denigrating people of other races. Pan-Turkists want to see partially Muslim Xinjiang taken out of China’s orbit and united informally, if not officially, with Turkey.

East Turkestan is a virtual state, alive only in the mind of identity-intoxicated dreamers, mostly in the Uygur diaspora, but that’s not to say it’s not a provocation. China would seem to be within its right to be concerned about the East Turkestan Liberation Organization and the Gray Wolves, both founded in Turkey. China has gone on the record, accusing the separatists of nefarious acts of terrorism.

The term East Turkestan was originally coined by a Russian scholar to replace an older Western term, Chinese Turkestan. Both terms are predated by local terms including Althishahr, which means six cities in Uygur, and Nanlu, a Qing administrative term, while Huijiang is an early Chinese term of reference for Hui people in the frontier area. The name Xinjiang was codified by the Qing Dynasty in 1884.

The US position, recently reiterated and made clear by the highly partisan US Secretary of State Mike Pompeo, is an odd one. On the one hand, the US leads the world in combating Islamist terrorism, real and imagined, and it is still waging war on Islamic nations. Since 9/11, China has been generally supportive of US efforts to root out terror wherever the US claims to find it. But US policy is full of double standards. A month after the unforgettable Islamist attack on the Twin Towers and the Pentagon, I attended a US embassy briefing in Beijing. When I asked the US spokesman why the US continued to support Islamic separatists in China, he said, “it’s different.”

And that has pretty much been the US party line ever since. Anti-Beijing supporters separatism who lean towards the US are given a free pass. It’s a reaffirmation of a consistent flaw in US foreign policy--rank hypocrisy. One need only consider the brutal US-backed “Contras” who ravaged Nicaragua to grasp that bitter irony that one man’s terrorist is indeed another man’s freedom fighter.

Where soccer star Mehut Ozil really trips up as a booster for the Uygur cause is in his flag-waving support for pan-Turkism. This is a toxic creed in the same way that pan-Germanism is, and Ozil, being a German citizen of Turkish descent, should know better.

In China, the reaction to his invocation of free East Turkistan was predictably fierce and over the top. Soccer matches have been yanked off the air, Ozil soccer shirts burned and Ozil’s likeness is getting air-brushed out of video games. Unlike the information controllers in China, it’s my view that a sportsman such as Ozil should be free to express his ideas, even ill-considered, cockamamie ideas, but talk of separatism can be incendiary. 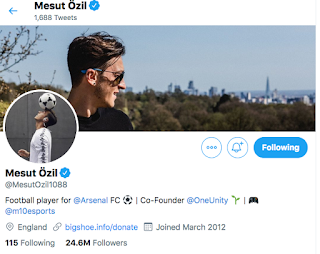 If Ozil cared a little more about democratic politics, he wouldn’t have been so quick to embrace authoritarian Turkish strongman Recep Erdogan, and he wouldn’t have foolishly wrapped his message in the flag of a separatist group that wants to carve a big chunk out of China.

If Ozil knew a little more about Turkish history, the land of his grandparents, he might take pause at the shocking Armenian genocide, in which pan-Turkism was the noxious fuel for a movement of ethnic cleansing and racial “purifying” that all but wiped from the map the ethnic neighbors of his Turk ancestors. Finally, he might face the hard-to-stomach reality that today’s Kurds did much to defeat ISIS while Turkey played dumb, looking the other way.

He might also take note that the Kurds, using similar reasoning to his, lay claim to large parts of his beloved Turkey, and if they had their way, an independent Kurdistan would be carved out of the Anatolian heartland.

Ozil is not alone. His one-sided thought process aligns rather well with President Trump’s view of the world. To Trump, Erdogan is a buddy, the Kurds deserve to be betrayed and left dangling. For reasons that cannot be rationally understood, Trump stated just weeks ago that there was no Armenian genocide, either, belittling the documented historic record of extermination and expulsion of over a million innocent people that commenced in 1915.

Mercifully, a number of Armenian survivors found refuge in the United States, though Trump has shown little tolerance for such movements of people across borders unless it involves his own beloved German ancestors.

Along with the implicit support of Trump, Ozil can look forward to partisan support in journalistic quarters where the anti-China agenda trumps balanced reporting. The Chinese press was rightly excoriated for criticizing Ozil without saying why he was being treated like an anathema. But Western accounts have narrative holes as well. Whether by omission or commission, or just bad editing at the home office, Ozil’s naked embrace of the incendiary blue flag of separatist East Turkestan was left out of most reports on the topic.

If a soccer player had used the platform of fame to advocate for the secession and independence of a US state using the Confederate flag as backdrop, he or she would have deservedly been hit with a red card. But when it comes to China, which has recently become a popular piñata for US politicians looking to smack hard without taking too close a look at the facts, the bashing has already begun. 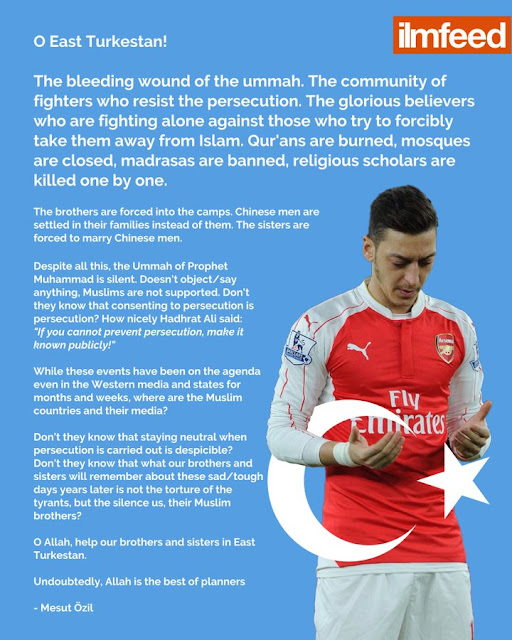