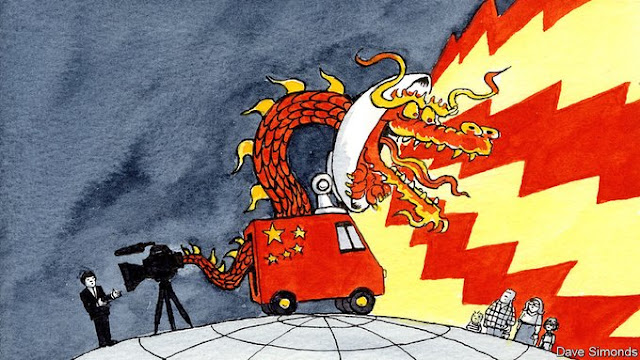 Mike Pompeo is a man on a roll, a negative roll. On March 2, 2020 he imposed, by fiat, arbitrary retaliatory limits on Chinese journalists in the US. Three days later, Pompeo was at it again. “A free press helps expose corruption and protect the people from cover-ups,” he proclaimed.

This is richly ironic in the wake of an impeachment trial brimming with evidence of corruption and cover-ups.

Trump supporters, who don’t seem to mind it when their orange-tinted hero incites hate by calling journalists “the enemy of the people,” generally cheered the announcement.

Anti-China agitators mostly claimed vindication, but even a veteran human rights activist was moved to write: “Petty, short-sighted, and hardly an assist for press freedom anywhere, especially in China.”

Pompeo’s claims on free speech and fair play ring especially hollow given his trampling of the same. He abuses journalists, lacks accountability and looks the other way when his boss rouses crowds to shout “fake news” and “lock’em up” at those who dare to disagree.

Even more horrifying, given the pandemic conditions of the present, is the way the Trump administration has been muzzling scientific experts, lying about statistics and seeking to control the flow of critical public health information. Trump anointed his obsequious Vice-President as coronavirus czar, not because Mike Pence has the expertise, but because, in Trump’s own cavalier words, “he doesn’t have anything else to do.”

Yet Pompeo crows on about the US as a nation that can do no wrong. Never has the cherished idea of “free press” rung so hollow as when emitted by the lips of so undemocratic a public servant.

Pompeo has no moral ground to be preaching anything to anyone. “We lie, we cheat, we steal,” was his mantra at the CIA and he’s continued to be underhanded in his obsessive zeal for hurting China and Iran. When it comes to his tight-lipped, unquestioning support of his boss, he acts like a crime family consiglieri. 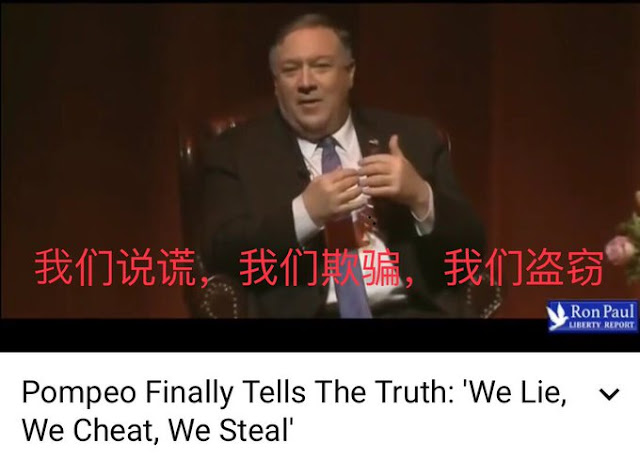 Although coronavirus is the dominant story of the moment, US twitter commentators were quick to chide Pompeo for hollering from his high horse when he deemed denying journalist visas as a means to make Beijing “respect freedom of expression.”

The tweetstorm in reaction, mostly from Americans, was swift and straight from the hip.

-We urge YOU to respect freedom of expression…and while you're at it...resign!

-We urge Beijing to respect freedom of expression even though the Trump administration does all it can not to. Give me a break.

-So capping a foreign media group is giving them freedom of expression? In what universe does that make any sense???

One commentator noted that Pompeo is destroying the law of the land in the USA while demanding that “other countries obey the laws (he’s) decided they should respect.”

Another pundit referred to Pompeo’s groundless firing of upstanding State Department diplomats who got in the way of his corrupt shenanigans in Ukraine, and his subsequent attempt to cover-up the same by bullying NPR journalists who wanted to investigate the story.

-Have you had a chance to apologize to NPR’s Mary Louis Kelly yet for accusing her of lying? And have you made a public statement thanking Ambassadors Taylor and Yovonavitch for their service and integrity yet?

For a more nuanced discussion of the US-China tit-for-tat strictures being placed journalists, one finds a calming plea for restraint and tolerance in the words of Anthony Kuhn, a long-time China reporter for NPR. He’s a frontline journalist at risk, but he finds no comfort in Pompeo’s rash actions.

“Remind me now, who is the “enemy of the people?” Kuhn slyly asks in reaction to Pompeo’s cap on China journalists.  He adds that weaponizing journalist visas is not a good way to champion press freedom, noting that such an action is unlikely to level the playing field.

“Forgive my stupidity,” Fannyi writes to Kuhn,“but are you arguing for or against the US cap on Chinese journalists?”

Kuhn replies:  I’m arguing that any government that respects press freedoms should stop trying to dictate who can report what where, and instead focus on increasing access for reporters and transparency for the public.”

Fannyi: Then I agree with you. How do you think the US should respond to Chinese expulsion of journalists (if at all)?

Kuhn: Lead by example in dealing with US domestic press. Use US openness as strength, while addressing vulnerabilities.

Fannyi: High sounding words, but lacking in specifics. You're basically saying, do nothing in response to China's ejection of journalists.

But is it enough just to lead by example?

Kuhn holds to his conviction. He concludes that tit-for-tat actions are counter-productive, for they “undermine our advocacy of press freedoms and empower those who violate them.”

Whether it be war, or a high-stakes tit-for-tat diplomatic spat, or more mundane human quarrels, human frailty typically leads both sides to justify their bad behavior by pointing to the other.

But there is another way. Upholding one’s beliefs and acting in accord with them is not inaction but action of a different dimension.

Given the state of crisis the world is in today, and the not inconsiderable possibility of diplomatic collapse, taking the high road is not just a good option, it’s the best way.