The May 29, 2020 White House speech on Hong Kong by the erratic and increasingly authoritarian President Trump was not as bad as it could have been—the stock market took it in stride and Beijing's response was less than withering-- but it wasn’t very good, either.

Composed by committee and read straight through from a teleprompter, it was laced with Trumpian complaints about the US being “ripped off” and the obligatory pinning of blame on past presidents, but it was largely free of the incendiary innuendoes and malevolent malapropisms that recently led the president to getting admonished on Twitter by Twitter for postings that contained hatred and lies.

Instead, the president’s Hong Kong speech, though not at all milquetoast, represented a patchwork of clashing voices, some reasonable, some not, some trying to wedge the door open, others trying to slam it closed.

The “carnage” section was redolent of the notoriously gloomy White House speechwriter Stephen Miller, but regardless of authorship, there was ample red meat for red-hatted constituents and dog-whistle nationalists. But there were also a few carefully-phrased formulations and open-ended ambiguities, directed at anyone in China who might be listening, suggesting a less combative school of thought.

Although the revocation of preferential treatment of Hong Kong was the ostensible topic of the talk, Trump offered few details and in sum, it sounded more like the end of the beginning than the beginning of the end.  The “death knell” invoked by Mike Pompeo after his rash determination that “One Country, Two Systems” was no longer in effect did not resonate loudly.

Trump started out with the blame game, continuing to heed the advice of Republican strategists who see blaming China as the best way to deflect from the president’s own shortcomings, of which there are many.

The ambitious political pugilist Mike Pompeo has been telling European leaders and anyone who would listen (few have) that Covid-19 should rightly be called the “Wuhan Virus.”  He scored a petty victory in getting Trump to use exactly that term in the latest speech. While that might represent a mild dial-down from the incendiary usage of “China virus” that Trump resorted to in mid-March, it still reeks of an attempt to “point over there” instead of reckoning with the stark failure of Trump-backed public health efforts in the US homeland.

Flanking the president at the podium were US Trade Representative Robert Lighthizer and Treasury Secretary Steven Mnuchin. Though they stood mute and stiff throughout, their presence spoke to different constituencies. Mnuchin, for example, offers a counterbalance to Pompeo, which signals that the business of business has not been entirely eclipsed by the politics of politics.

According to the odd logic of Trump's statement, Hong Kong has not so much been censured as ceded. With Pompeo bombastically insisting that Hong Kong should be punished to punish China, denying the port city preferential treatment and instead treating it with suspicion, what's the net gain? Even China has something to gain from a high degree of autonomy in  Hong Kong, if only for financial purposes and the benefits of having sovereignty over a super special economic zone.

A tea-leaf read of theatrical placement of bodies as props, in which six of the president's men were lined up like bowling pins on both sides of the big honcho might suggest it's all about teamwork, but it also reveals Trump as a boss who can tolerate some dissension in the ranks so long as his factotums are unbending in their loyalty to him

It’s far easier to pick on a hapless UN organization than face-conscious Beijing, which controls the levers of the world’s second largest economy and is backed by massive military might.

Whether it was for matters of face, or simply an absence of facts, Trump merely hinted at the possibility that the coronavirus first detected in Wuhan was something conspiratorial. Though he came short of claiming the virus was manufactured or weaponized, he made vague, fuzzy claims that will allow the more fanatical of his followers to connect the dots and put the blame squarely on Beijing.

"Why is it that China shut off infected people from Wuhan to all other parts of China. It went nowhere else. It didn't go to Beijing, it went nowhere else, but they allowed them to freely travel throughout the world including Europe and the United States.”

Wuhan International Airport was closed for two months, except for emergency evacuations demanded by the United States and other countries who had nationals stranded in a closed city. Domestic and international travel were both strictly curtailed.

Never mind the facts. Trump then claims, "the world is now suffering as a result of the malfeasance of the Chinese government.” The sentiment might be Trump’s, but this is not the syntax or vocabulary of the man whose previous day’s tweet was about “shooting and looting.”

Wuhan’s bad luck being the first city to succumb to the virus on a massive scale bought time for other cities in China and around the world, but Trump keeps harking back to a delay of a few weeks in Chin when he himself dithered for more than two months with a great deal more information at hand.

Trump’s speechwriters prudently left Xi Jinping out of his diatribes which can be construed as a calculated conciliatory gesture in an otherwise ill-tempered theatrical strike against China.

Just a week before, the president was railing against an unnamed figure in China in this way: “Some wacko in China jut released a statement blaming everybody other than China for the Virus which has now killed hundreds of thousands of people. Please explain to this dope that it was the “incompetence of China”, and nothing else, that did this mass Worldwide killing!”

The “dope” tweet backfired, domestically at least, because it was paraphrased in a viral meme that bluntly suggested that Trump was the real wacko.

At the same time, a split between two of Trump’s top China advisors broke into the open on Fox TV.  Talk show host Lou Dobbs pit the ideas of outside advisor Michael Pillsbury against White House advisor Peter Navarro. The ostensible issue was an unsigned White House strategic report on China that Pillsbury characterized as watered down and weak, on a par with something you’d expect from Obama or Biden--as stinging  a rebuke as can be imagined among the Trump faithful.

During the May 22 on-air confrontation that followed, Navarro did not take ownership of the “soft-on-China” report, (which admittedly had a bureaucratic, inter-agency ring to it) but Lou Dobbs, once he got his teeth in, did not let go. Instead he accused his guest of “peddling pablum and BS.” An extraordinary ten minutes of television ensued in which the hawkish Navarro, author of “Death by China” was hammered and clobbered by Dobbs for being too soft on China. Among other unreasonable complaints, Dobbs was apoplectic because the president wasn’t calling Covid-19 the “China virus” anymore, not even the “Wuhan virus.” 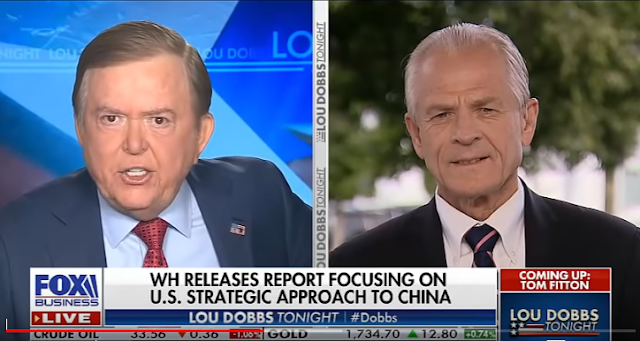 At one point, Lou Dobbs took a quote from an opinion piece of mine published in China Daily (which had been quoted and retweeted by Michael Pillsbury) to make some kind of point, the nature of which eludes me because the point never got made, so intense was the televised inquisition.

The rift among hard-liners jostling for favor that broke into the open in the May 22 TV show was very much evident in mixed messages of Trump’s May 29 speech. It was supposed to be about Hong Kong, it was supposed to focus on China, but it ended up speaking volumes about inside the Beltway infighting.

Trump China policy is a dog fight full of dog whistles, lap dogs, guard dogs and running dogs. His speechwriters failed to bring coherence to the big Hong Kong speech due to factional infighting and the need to accommodate conflicting views in China strategy.

There are a few soaring words sprinkled in there to be sure, at points it's a sugar-coated encomium to democracy, liberty and all that jazz, but at heart it's a brutal patch-up job to bridge the rift between Trump's “wacko” hard-core haters and mainstream nationalistic conservatives.
Simple theme. Powered by Blogger.