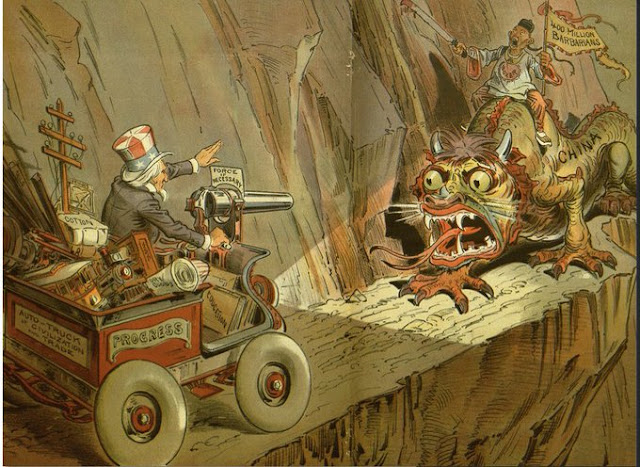 The stealthy but steadily expanding pandemic, which has put millions of people on edge, worried about their lives and livelihoods, is proving to be a game-changer. Its toll on human suffering and devastated economies is reasonably well documented, but not the pressure it exerts on foreign policy. The short tempers, petty provocations and latent prejudices seen erupting on the street are echoed in the halls of governance as well; indeed a pattern of top-down invective can be clearly traced.

Global anxiety about the pandemic is a force field full of distortions akin to the “fog of war.”  Fear, panic and a rush to self-preservation is diminishing common decency and common sense.

Petty slights, retaliatory digs and mean-spirited policy threaten to become casus belli. When China and the US each accuse each other of weaponizing the coronavirus, the world suffers from the release of a new, unwanted political virus.

The White House casts cruel aspersions about Chinese people and summarily puts immigrants and foreign students on notice. In the Pacific Ocean, routine patrols have been stepped up, “freedom of navigation” asserted with bellicosity and surveillance increased. Companies get slapped with sanctions without evidence. Journalists are tossed out on both sides, leaving hysterical voices to fill the vacuum.

The world, riddled by the quick-flowing news and acidulous misinformation on the Internet, is seeing angry reactions in reaction to angry reactions, ad infinitum. The rapid exchange of insults and tribalization of like-minded views is creating a Tower of Babel moment. Proponents of isolationism and provincialism gain strength with each lockdown and the shock reduction of travel, tourism and trade.

Virus-battered, hypervigilant populations are beginning to shape relations between states. Reactionary populist demands make for bad diplomacy, but diplomacy, too, has been contaminated by the toxic mood of the times.

A kind of collective trauma has set in. Even after the worst of the pandemic passes, stresses will linger. The irritability, confusion, anxiety and despair has gone global. The tell-tale signs of denial, angry outbursts and self-destructive behavior are in the daily news for all to see.

Everyone, everywhere, is on guard. China and the US are part of a larger world collectively suffering from post-traumatic stress syndrome.

But it takes two to tango, and therein lies a strategy, if not a remedy.

Shi Yinhong at Remmin University recently touched on a critical point when he told the South China Morning Post that China need not respond in kind to every provocation:
“China could choose not to retaliate in this specific case,” Shi suggested, in reference to sanctions recently slapped on Chinese officials. “I think by doing so China could avoid causing further damage to its own interests.”

Indeed, breaking a cycle of resentment may well serve to create political capital. “An asymmetric approach could give China more space and leave a window to talk business with the next president,” Shi added.


Invoking asymmetry in the name of peace is break-through diplomacy. Asymmetry strategy has a long history in warfare, for example the rag-tag American colonial subjects who took on mighty Britain, or Ho Chi Minh’s under-fed, under-supplied troops who defeated both French and American attempts to take control.

But arguing for a foreign policy that invokes asymmetry for the sake of peace is fresh, out-of-the-box thinking. It helps avoid a race to the exits and a rush to the bottom. It is in tune with the struggle for social justice within nations, where subtle wielders of power such as Mahatma Gandhi and Martin Luther King played a seemingly passive hand to great advantage.

In psychological terms, an asymmetric response to deliberate provocation is a way of scorning the provocation and standing above the insult. Properly practiced, it is a technique for taking control, not ceding it.

In contrast, to answer every tit with a corresponding tat, even if carefully calibrated, is a losing strategy.

To react quickly and vociferously to each instance of being prodded is to be played. Impulsive reaction does not allow the strategic pros and cons of a move to be thought through.

Unthinking retaliation to apparent provocation creates the risk of kinetic conflict. It’s much harder to make a voluntary show of restraint after the blood begins to flow, even if the alternative is a death spiral leading to all-out war.

President Trump is by any reckoning a bad-mannered politician, a failed businessman, a documented liar and a cheat, but he is first-rate provoker. He has mastered the art of the insult and unexpected gibe to deflect criticism and put others on guard, allies and opponents alike.

Xi Jinping is more enigmatic, his statements more carefully scripted and less prone to public outbursts. But if veteran diplomats such as Yang Jiechi and Wang Yi can be said to reflect official thinking, they have shown, in their recent reports and published remarks a measured criticism of the US and a willingness to pull back from the brink and get back to the business of cooperative, civil relations.

Even if one sets aside the argument over which side has done more to aggravate the other--and make no mistake there are many serious issues that need to be addressed--both sides can and should exercise the option of restraint in the face of petty provocation.

Anger, once aroused, has a life of its own, resistant to logic. If provocations are played up by the press and popular opinion is weaponized in this age of social networking and instant messaging, it will be hard for even the most prudent politicians to call off the hounds of war.

When it comes to recalling past insults, Chinese collective memory is second to none. The “hundred years of national humiliation” meme, very much alive and kicking in China today, is a case in point.

Remembering is often a good thing, that’s what historians do, even if taking lessons from the past offers an imperfect guide to the future. But obsessing over every slight and reacting to everything all the time is ridiculously counter-productive.

But if a new Cold War is allowed to congeal due to perceived grievances and media-magnified complaints, the danger to both sides is unimaginably high. Precipitous decoupling is a guaranteed lose-lose proposition for all parties in this deeply fragile, deeply inter-connected world.