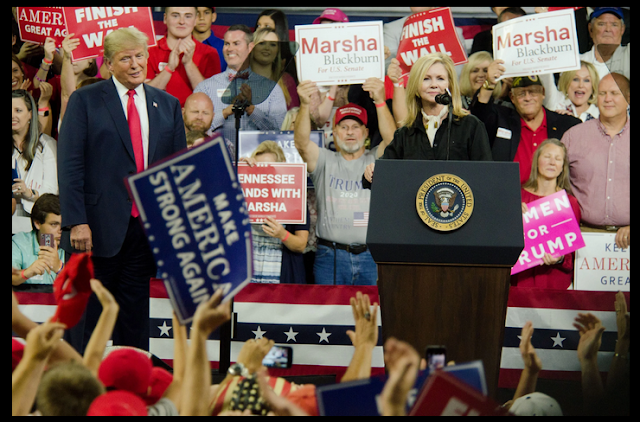 In one orbit, you have a politician from Tennessee, in another orbit you have a science fiction writer from Shanxi. Though their lives have followed very different trajectories thus far, each has begun to perturb the movement of the other due to the dark tug of nationalism.

Marsha Blackburn, a US Senator from Tennessee, nominated US President Donald Trump for the Nobel Peace Prize, denies climate change and rejects the science of evolution.

Liu Cixin is China’s first winner of the Hugo Award for science fiction. He worked as a computer engineer in rural Shanxi, but his creative flights of fancy have taken him clear across the universe.
Their point of contention?
Netflix is adapting Liu’s The Three-Body Problem,an epic novel that is grounded in  China, but imbued with a breathtaking cosmological perspective.
A China-produced version of The Three-Body Problem had been slated for a big-screen release but was postponed indefinitely due to an unsatisfactory cut. Then Netflix proposed a television series, bolstering hopes that the award-winning story would make it to the screen after all. The 2019 record-breaking box office success of The Wandering Earth,also based on a book by Liu, was encouraging.

In this fevered US election season, she is attacking Netflix’s creative collaboration with Liu, not so much because of his books, but because of a few comments attributed to him in a June 17, 2019 profile in The New Yorker. Blackburn’s letter to Netflix cites the following comment by Liu about his government’s policy in Xinjiang: “If anything, the government is helping their economy and trying to lift them out of poverty … If you were to loosen up the country a bit, the consequences would be terrifying.”

The quote in question is pro-status quo, but it is neither remarkable nor should it be entirely beyond the comprehension of those criticising Liu. Indeed, it is not so different from what an avowed supporter of Trump, like Blackburn, would say about the need for federal intervention
in the face of racial unrest in US cities.
The context for Liu’s comments, only alluded to in the interview, was a series of terror attacks, including a bloodbath at Kunming railway station in 2014 that killed 31 and injured 140 and which the Chinese government said was perpetrated by separatist forces.

Liu’s revulsion of terrorism, and his willingness to embrace strong measures to combat it, should not be unfamiliar to Americans in the post-9/11 era. Absent the play of nationalism, his law-and-order stance does not differ as much from Blackburn’s as it might appear at first glance

The real dispute is not in the realm of ideas but nationality.

For a Chinese to talk about China much in the way an American might talk about America is too much for an American supremacist like Blackburn to digest.

Although the news from Xinjiang is not reassuring and Uygur advocacy enjoys growing support on both sides of the aisle in Congress, Blackburn is no friend of Muslims in Xinjiang or anywhere else. She strongly supported Trump’s “Muslim ban”, as well as his border wall with Mexico.
At a time when the US economy is struggling and the country is facing a divisive election, racial strife and intimations of civil war, it is puzzling that Blackburn and four fellow US senators should take the time and effort to single out Liu and excoriate Netflix.

Blackburn’s jeremiad against China makes a specific mention of “involuntary medical testing, and forced sterilisation and abortion”, which is not surprising; one of her political ads falsely accused Planned Parenthood of being in the business of selling “baby body parts”.

Liu’s stated support for China’s one-child policy, elsewhere in the interview, and his implicit support for abortion gives the US senator all the ammunition she needs.

A master at manipulating indignation, Blackburn is playing the China card to rile up a depressed and confused electorate in favour of Trump.

Philip J. Cunningham is the author of Tiananmen Moon, a first-hand account of the 1989 Beijing student protests