WHAT TRUMP TOUCHES, HE RUINS. WHAT HE CANNOT TAKE A PIECE OF, HE WILL ATTEMPT TO DESTROY 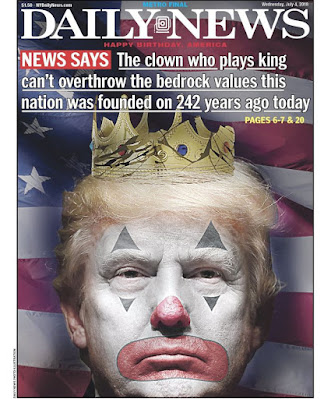 WeChat is a ‘killer app.’ It does many things and it does them well. It’s popular, intuitive and easy to use and has been successfully monetized. It does what some American-produced apps do, but does them better and in a more integrated way. The US is not always number one.

Maybe that’s why the US government, which has long nurtured Silicon Valley as the tech arm of the industrial-military establishment, and feigned to look the other way as American-born Frankensteins like Facebook and Google were unleashed on an unsuspecting world, has ordered a hit on WeChat.

WeChat’s parent company TenCent has created a winner. The threat to ban WeChat from the US, where it is especially popular among people with links to China, is an attack on the free speech of millions. To ban a popular platform of expression is an abrupt authoritarian turn that even staunch US critics could hardly have predicted a few years ago. The shocking shift in US policy reflects Trump’s defining values: he is mean, he is a bully, he is unpredictable, and, perhaps of greatest concern during this fraught election cycle, he is a sore-loser.

Silicon Valley is still a force of nature, so why is the US acting like a loser instead of a winner? Why the sudden smacking down of competitors?

Once the undisputed leader in computer hardware, app development, tech innovation and all things software, the US, under Trump’s insecure and petulant leadership, has taken to bullying and banning vital competitors.

Trump’s limited intellect, short attention span, tax tomfoolery and tattered business record all point to a “let’s make a deal” mentality. As a result, he has bullied and berated innovative companies such as Huawei, which makes excellent phones, and Tencent, which created WeChat among many other things, and ByteDance, the creator of Toutiao and the insanely popular video app, TikTok.

The US president may have mastered Twitter, but he doesn’t understand the complex, inter-connected tech ecosystem and his mistakes are coming back to bite. He has surrounded himself with nay-saying China Hawks such as Peter Navarro, Mike Pompeo and Michael Pillsbury who seek to level the playing field with China by beating a retreat from the field and then zapping it.

The preening desire to be number one at any cost and by any means on the part of the numbskull narcissist in the White House is causing the US to lose friends and lose influence at a precipitous rate.

There was a time where US business confidence was sufficiently buoyant to live and let live, to share its technology with the world, knowing it had new, superior products coming down the pipe. A time when tech artists and creators, such as Steve Jobs, and not money-grubbing parasites like Mark Zuckerberg ruled Silicon Valley.

Those days are over, if not objectively, then at least subjectively, in keeping with the doom and gloom headlines and the increasingly divisive and dour national mood.

When unbridled greed becomes the national ethos, it’s a race to the bottom.

Leaving some major foreign policy debacles aside, the US in the early post-war period exuded confidence and projected a naïve but not entirely insincere aura of global goodwill.  The complex, charismatic and tragic John F. Kennedy embodied that reach-for-the-sky, future-embracing ethos.

Even though the US limped out of Vietnam in 1975 with diminished prestige, and culture wars replaced the space race as a focus of national yearning, the country retained an internationalist perspective that led to a boom in US-China trade, tertiary education and cultural exchange.

The “good times” lasted through the Obama administration.

It’s gone now. Kaput. Gone, too, are the days of decency and graciousness. Michelle Obama famously summed up the winning attitude that helped her and fellow African Americans achieve much in the face of unfair obstacles and constant ridicule.

With Trump, all that’s changed. His method of operation and aspirational motto might as well be: “When they go low, we go even lower.”

It’s no coincidence he was groomed in the negative art of the deal by Roy Cohn, consigliere to criminals and Cold War McCarthyites.

Trump, showing signs of an undiagnosed obsession, has tried to dust off everything his predecessor touched and undo everything his predecessor did. The gilded redecoration of the White House is part of that obsession, if he had his way it would soon look like a chintzy branch of Trump Tower and a Trump golf course. That’s why First Lady Melania Trump was late in moving in, that’s why Jackie Kennedy’s much-beloved Rose Garden had to go.

What’s all that got to do with WeChat? Every time Trump touches something, he makes it worse. America’s rose garden has been vandalized from within, it’s cracked and broken, its beauty withered on the vine.

Trump allowed the excoriation of Huawei to continue apace, while sleazily hinting that a “deal” was possible. He naively thought he could make some serious cash by banning TikTok and then unbanning it under new ownership, and only made a mess of things.

What Trump cannot take a piece of, he will attempt to destroy. It’s the way he is. It is what it is.