As stirring theme music plays, the digital logo for NBT News does its digital magic, then fades, revealing a sparkling studio. The TV news studio is sleekly designed, immaculate and brightly-lit.

Two perfectly poised female news readers sit at the same desk. Given their matching yellow blazers, meticulous grooming and almost identical hairstyles, they could pass for telegenic twins at a glance.

It’s the noon news with a government accent, or rather, the non-news of the day, since the main topic of discussion on this day is an anti-government protest.

It’s time for National Broadcasting Services of Thailand to give the state's take on the student demonstrations of October 14, 2020. 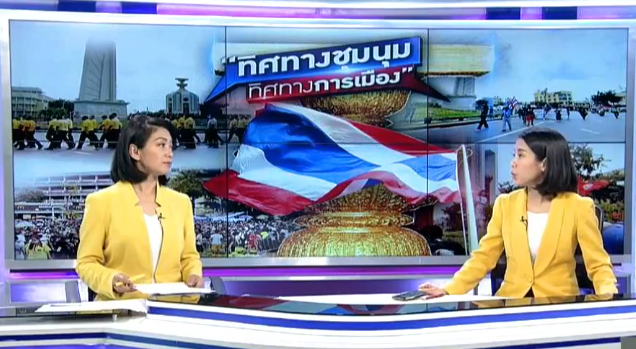 The eye-catching matching self-presentation of the two news presenters is reminiscent of the singing twins who performed as “The Peanuts” in 1960’s Japan. Also known as Mothra Twins, two sisters had a memorable cameo in the 1961 monster film singing a haunting melody in praise of the monstrous beast.

Thailand’s answer to the Mothra Twins have yet to be invited to take part in a film cameo, but they are actors acting out a certain role nonetheless. Bright, positive and unbearably upbeat, they take turns reading from the prompter, telling the day’s news as their image conscious editors and politically savvy producers have deemed it fit to tell.

They sum up the news of the previous day, October 14, 2020 in a brisk and light-hearted manner. It was a big news day, and they take the better part of a minute to explain that demonstrators had gathered at Democracy Monument commemorating the 47th anniversary of the October 14 democratic uprising of 1973.

They add that some people have been arrested.

And they have updates of events last night when the demonstrators were told to stop demonstrating.

So far, they’re not saying much, but it’s mostly true to the news.

“We’ll have updates about whose been arrested and so forth and so on later, but let’s give a summary of yesterday’s events first.”

What follows is an exceedingly truncated summary, so heavily edited that even someone who depended on the state broadcaster for news on the previous day would hardly recognize it was the same series of events being described.

Anything to do with ideas or ideology is edited out. Any whiff of confrontation is muted or removed. Key events, even those moments that just yesterday were deemed acceptable for coverage by state news reporters, are cut out.

Strangely, inexplicably, the TV footage is almost exclusively devoted to a tape loop of rowdy student protesters “dismantling” a plant display around monument.

The news twins relate with barely disguised shock that, horror of all horrors, some small plants had been displaced by the protesters, the potted display “dismantled.”

The pictures of protesters climbing the pedestal mound of the monument, picking up potted plants or otherwise tiptoeing past the deliberately obstructive placement of greenery hardly merits focus in a brief summary of the day’s events, but that’s the story we get. And even that story is presented completely out of context in a way that makes the student protesters look stupid.

The scripted narration does little to fill the gap about what happened before or after the plant-trampling incident, although the Thai for word “chronology” (lamdap hedgan) flashes briefly on the screen. There is no chronology or even fleeting attempt to chart the arduous 15-hour struggle between demonstrators and their plain-clothed and uniformed opponents.

They do utter in passing words to the effect that there were some conflicts among protesters, and some conflicting words exchanged, but luckily the police were there to straighten things out.

As they tell it, officials assiduously tried to keep peace, and watched patiently as protesters scaled the lower reaches of the Democracy Monument, protesters who, in their clumsy attempt to “take it back” just messed up the decorative plants.

Take what back? Why? Why this of all monuments? What does it stand for, anyway?

No explanation is forthcoming.

Mess made, the students then turned their gaze to Government House as directed by their core leaders. And they did it ahead of schedule!

Along the way passed a royal motorcade.

Some protesters acted rudely, hurting the feelings of people.

And that’s about it.

The news report does not begin to do justice to a big news day. A tumultuous, colorful, engaging, enraging, complicated day of struggle. A day that saw protesters give rousing speeches, break through police blockades, get harassed by a rightist, royalist motorcycle cavalcade, argue in the streets with bussed-in yellow shirted men with identical haircuts, and get stopped in their tracks by the nail-biting passage of the Queen’s motorcade. Some not so nice things were said as the pale-yellow limo glided slowly by.  Some of the students, hemmed in by security personnel, gave the royals the enigmatic three-fingered salute.

By nightfall, the protesters had outwitted the police in a whack-a-mole journey that saw them finally break past busses, barbed wire and other physical barriers to reach Government House.

But you won’t hear that on the news. No, instead, the twin anchors cut to a police presser where two unsmiling but strangely amiable police explain that if the students don’t disperse, the “law will be implemented.”

Hmm. Sounds serious. But they are so soft-spoken and well-spoken!

The “twins” echo the soft-hard message, reminding viewers that the protesters were asked nicely, several times, by police to disperse.

The Mothra gals are upbeat. They believe that things will quiet down quickly, because most people have deep respect for law. That being said, police stand by at the ready just in case.

It’s as if they live in a world, a fantasy world worthy of Mothra, where every word and action on the part of police is meant to be highly reassuring.

They describe the police forces as being informed by “highest standard of human rights” and admire them as officers of the peace who “do things by the book.”

What’s more, the police are meticulous about giving ample warning before any action. (Except for the surprise raid on the protester’s Government House encampment at 4:40 AM but that’s another story.)

The news now cuts to a night scene at Government House. A phalanx of heavily-suited men in blue with the word “POLICE” emblazoned on their jackets. They carry shields like Roman warriors. Helmets glistening, they stand ten-deep in tight formation. The harsh symmetry and militant precision is pleasing to the eye.

The Storm Troopers have arrived.

It is then related that the students were told to clear the grounds by 10 PM or else. Police trucks designed to spray water are on the scene. The announcers then identify, though not without a telling hesitation, the name of the man thought of as the protest mastermind. He’s ah, Arnon, Arnon the lawyer.

Arnon had made an announcement, saying the crowd had agreed to clear out in the morning. He added that they will meet again the next day at 4 PM at Rajprasong Intersection.

But his plan to retreat and regroup came to naught, at least for him personally, because officials arrested him and other core leaders a few hours later.

“So let’s see what happened,” the telegenic newscasters intone, segueing into the crackdown.

At 4:40 am, police beating on sticks to drive away protesters. Police showed an arrest warrant to Lawyer Arnon. Penguin was arrested, too.

This revelation is accompanied by a revealing visual of students being roughly pushed back by the phalanx. It’s not a nice picture, but the yellow-clad announcers put a nice gloss on it:

“The police asked everyone who was left to leave so that traffic could quickly be turned to normal.”

Just what constitutes normal traffic at 5 AM, anyway?

After the arrests, the police made a televised announcement, “so that everyone could come to a correct understanding” of what happened.

For a moment, I had a flashback to my days as a guest commentator in the news studio at CCTV.

Thai TV is starting to sound like Chinese TV.

The violators were arrested for violating emergency decree. Once the core leaders were taken away for questioning, and their followers dispersed, the roads around Government House were quickly restored to normal, or so we are told.

Why the police went the trouble of using force instead of waiting a few hours for a planned orderly withdrawal is not explained.

Certainly, the impending visit of a foreign minister from Thailand’s most powerful Asian neighbor had something to do with that.

But first, the clean-up.

The streets were cleared and swept clean, as a pristine camera sweep shows. Things were so much under control that police could leave the scene by noon to regroup to defend the location announced by Lawyer Arnon for the follow-up demo.

The noontime news of October 15, about half of which was devoted to skimming over the events of October 14,  suddenly gets proactive and looks ahead to the evening of the same day, October 15.

The polite ladies politely repeat the polite police warning not to attend the scheduled mob scene at Rajprasong Intersection.

If police see a gathering of more than five people there, in violation of law, then the police will take action. The police are thus requesting “the people,” the general population that is, to stay away from that area after 6 PM.

It is further reported that three police were transferred for their failure at crowd control on October 14.

Huh? What is that all about?

They failed to “follow the plan,” it is said, “because everything must be done according to plan.”

While the unfollowed plan is left unrevealed, presumably it had something to do with quelling the demonstration before it happened.

We learn that the police in question are being investigated to discover the truth of the matter and to uncover their faults so “the problem can be solved.”

Drawing to the finish of the political news, the announcers relate that a total of 22 protesters have been arrested, including the core leaders.

Protesters “one through four” are identified by numerical ranking using a mix of nicknames and given names.

They were arrested because there were orders were out for their arrest.

Oh, that explains it.

The newscasters then discuss the emergency decree. No more than five may gather and various injunctions are in place against free speech, including “no news or electronic communication that causes worry or makes trouble,” no material support to protesters (including food, supplies, sound trucks, transportation).

Please, no photos of officials or activities, it’s against emergency decree.

For those who break these laws, penalties are harsher than usual, “they can look forward to two years in jail or 40000 baht fine or both.”

This dire announcement is illustrated with a visual clip roll of rowdy students flashing the three-finger salute.

And in closing, the police ask for the cooperation and understanding of “the people.”

In China they call them the People’s Police.

And, an important follow-up of an earlier breaking news story:

Officials inspected the site where demonstrators had been seen moving the plants that were carefully placed around the monument. A number of potted plants have been reported missing from the environs of the Democracy Monument. Police are investigating as some plants were taken to other locations and it may take some time to retrieve them.  Environmental authorities estimate it will take at least one or two days to restore the plants to the original arrangement.