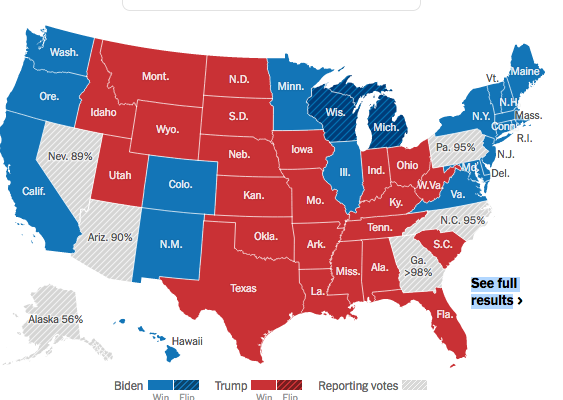 Trump has proved himself to be a loser who ruins everything he touches, even democracy itself.

The vain leader’s unwillingness to yield in the face of facts not to his liking has put his nation on cliff’s edge, dangerously in abeyance. A catastrophe waiting to happen. Shell-shocked Americans await with bated breath, while an underwhelmed world looks on with bemused puzzlement, derision and fear.

Why wasn’t the man who lies, cheats and steals as a matter of course, the man who routinely polarizes, incites violence, and spews intolerance not been clearly repudiated at the polls.

Why was he not swept away in a massive landslide?

How can such a venal politician still have millions of supporters in a supposedly advanced nation with a vigorous free press and a robust democratic tradition?

Historians will ponder this painful paradox for years to come.

Due to historic peculiarities of the American “democratic” system, the difference of a few thousand votes at the state level can flip an election, even with one candidate way ahead of the other nationally. The Electoral College makes it possible for winners can lose and losers to win. It’s happened twice in recent times, in the Bush versus Gore contest of 2000, and the Trump versus Hillary contest of 2016. This system is deeply flawed, and when the contest is a close one, it is downright infuriating.

The unsettling prospect of both sides claiming victory, one by the polls, the other by spurious claims, is due in no small part to the fecklessness of the sore-loser in the White House who goads his followers to believe that his loss is their loss and that losing is not an option.

Already Trump supporters are being prepped by incendiary tweets, and cheer-leading from Trump-friendly media to alternately declare victory or cry foul in a way that screams, “losing is not an option!”

If losing is not an option, it’s not democracy. If one side concocts a false win, it’s authoritarianism.

Recounts have been demanded, most especially in key states such as Wisconsin and Michigan where the margin of victory appears razor-thin, and court challenges are likely in Georgia, Arizona and Nevada.

Once Pennsylvania showed an early Trump lead, the president tweeted, “Stop the Vote” yet perversely pressed for more vote-counting in states where he was behind. Hypocrisy much?

As if the potential conflict between popular vote and Electoral College vote is not destabilizing enough, red and blue America rely on conflicting news outlets and partisan media, pitting the slanted worldview of one against the other.

It’s not just opinions that differ, in the red and blue precincts of America; even basic facts can’t be agreed upon. Whether it’s about Covid, climate change or counting votes, consensus remains elusive. There’s scant comfort in the neutrality of math and legal checks and balances when lies have as much currency as truth.

What a tragic mess.

America was never the beacon on the hill it pretended to be, but it did enjoy global popularity and prestige after World War Two. Yet over time, imperial self-regard and a culture of violence at home and abroad has worked to erode much of the moral ground it once possessed. But only in this most recent election cycle, has the very democratic system of the world’s “leading democracy” come into question.

Observers look on with horror and amazement as the US President, a powerful world leader promise to take the country down if he doesn’t get his way. His willingness to cheat, lie and steal his way to get what he wants is legendary. He offends common courtesy, common sense and common decency by tweet-blasting petty complaints, documentable lies, intemperate takes, confused facts.

On Thursday evening in DC, a pouting, whining cry-baby Trump incapable of conceded a fair contest, went on TV, using the bully pulpit of the White House, to claim he is being cheated. Spouting lies and betraying a weak grasp of reality, he cast aspersion on Detroit and Philadelphia, known for large minority populations, and proceeded to incite his followers to protest any result not in his favor.

The clownish petulance would be funny, worthy of a late-night comedy sketch, or the theatre of the absurd, were the stakes were not so high.

The unhinged mental state of the US commander in chief is a clear and present danger and of global concern as long as a man so unstable remains in control of the world’s deadliest arsenal.

He threatens to bring governance to a standstill.

Presidential historian Doris Kearns Goodwin has observed that the US has not been so divided since the 1850’s, a period which was prelude to the Civil War. The sense of a shared national project and respect for fellow citizens across the political divide is at a nadir

Both warring tribes tend to see the other as the enemy, fueled by the echo chambers of two parallel media ecosystems, one red, the other blue.

The election of 2020 has become the Schrodinger’s Cat of elections.

The candidacy of both is simultaneously dead and alive.

But the counter-intuitive patterns of particle physics are not sustainable in the political arena. The cognitive dissonance is mind-cracking. If the losing side does not concede defeat, the whole system will break down.

Political collapse of the world’s most powerful country is not out of the question, and if it should crash and burn, it will be the most dangerous country as well.

Even if nothing apocalyptic happens, the leadership vacuum of a prolonged impasse will have unintended consequences around the world.