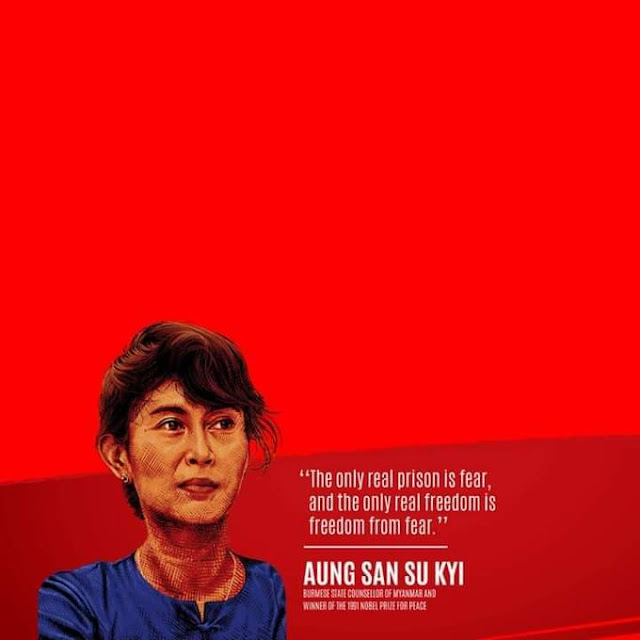 The strategic gaze of international relations experts is not only riveted on Burma, where a coup led by military strongman Min Aung Hlaing has replaced the democratically-elected government of Aung San Suu Kyi, but on the emerging dialectic between the US and China.

Japan and India are both intimately involved in Burma business ventures, and have a pragmatic role to play. Thailand and Bangladesh, with out-sized leverage as next-door neighbors, will be watched closely. But when it comes to ideology, the superpowers set the tone.

What will China do? What will the US do?

Will it be “non-interference” or “humanitarian intervention”?

The world is watching.

For American observers, the military takeover in Burma is an uncomfortable reminder how easily democracy, a value seen as exportable, can be interrupted. American policy makers need not look so far afield to understand the sinking feeling of election results being rudely disputed due to the hurt, aching ego of the loser. The Capitol revolt of January 6, 2021 was a day of reckoning for the US, and its foreign policy going forward should reflect a bit more humility and soul-searching than is typically the case.

The Pentagon largely resisted coup noises made by the authoritarian-inclined President Trump, and in that sense is a credit to democracy--at home. But the US military abroad is another matter. US politicians need to be cognizant of what the world’s most interventionist military looks like from the outside looking in.

Will the US intervene? Secretary of State Anthony Blinken’s policy team is more buttoned-down than the righteous rightists of Pompeo’s State Department, but it includes veterans of bad interventions in Libya, Iraq and Syria.

Does the US “get” Burma? Probably not. Not as well as China does, in any case.

China is heavily invested in Burma on a number of levels. They share a border, after all, and its natural that there should be vigorous trade between the two. There are also solid geo-political reasons why China might covet closer cooperation with Burma; given the inherent vulnerability of Strait of Malacca oil route, having the option to import energy via a port on the Bay of Bengal such as Kyaukpyu is a strategic plus. Pipelines are already in place, rail lines are seen as the next natural step, connecting China’s landlocked Yunnan region with the nearest sea.

Already rumors are starting to swirl that China is somehow behind the February 1, 2021 coup, or stands to be the beneficiary of it. It’s both in keeping with the reflexive anti-China tirades of the times, and a real recognition of China’s growing reach.

But China is, and isn’t, a friend of Burma’s military. It did deal adeptly with the powers that be in the Tatmadaw when the US, out of righteousness and calculated reasons of its own, chose to turn its back on Rangoon. However, the onset of elections and the rise and fall of Suu Kyi in Western eyes has complicated the narrative.

What’s more, despite protestations of brotherhood, Beijing has irked Burma’s generals because it has quietly backed the armed insurgency of various ethnic minorities, mostly in border areas, long after it gave up backing the Burmese Communist Party and other fraternal insurgent parties in Southeast Asia.

China has armed the Wa and other border-dwelling ethnic minorities that remain in a state of war with the central government, and the Arakan Army, composed of multi-ethnic militants engaged in bloody conflict with central authorities in Rakhine, actually welcomes Chinese investment in the restive Western region.

But perhaps the most surprising “coup” of China’s multi-pronged outreach to Burma is the winning courtship of democratic icon Aung San Suu Kyi. A coddled VIP  in China, she met with Xi Jinping in 2015, 2016 and 2019. And she returned the favor, hosting China’s top leader during his January 2020 visit to Burma.

Not unlike the British before them, Chinese diplomats have found that Burma, one of the most diverse multiethnic nations on earth, lends itself to divide and conquer technique, especially when the center won’t cooperate.

Given the complexity of playing one group off against another, multiplied by numerous groupings, the delicate Burma balancing act can break different ways.

If the US response is reduced to feel-good virtue signaling or overt intervention, failing to handle the situation with appropriate diplomatic aplomb, China may well prove to be the beneficiary in the long run, if only by default.

Caught between its conflicting desire of supporting democracy and supporting human rights, Washington has all-but-abandoned democracy icon Suu Kyi because of her inattention to the human rights of the Rohingya. Her brand of Buddhist nationalism is not unlike Han supremacism in China.

China’s stated policy of “non-interference” in diplomatic matters, though not entirely honest or consistent, allows for a flexibility unpracticed by US diplomats, who are always teed off about something or another, waving the righteous finger.

Beijing can court dictators without blushing, but it can also court democratically-elected leaders who offend US sensibilities, such as Rodrigo Duterte of the Philippines and controversial populists, such as Nicolas Maduro of Venezuela.

Foreign Minister Wang Yi was in the Burmese capital last November where he also met both Min Aung Hlaing and Suu Kyi. It is not known whether China’s emissary received advance warning of what was to soon transpire, but given reports that Burma’s military strongman and the people’s “queen” have not  spoken to one another in a year, China probably got an earful from both.

What remains to be seen is whether Beijing’s “non-interference” policy or Washington’s “humanitarian intervention” will be the right approach this time around.