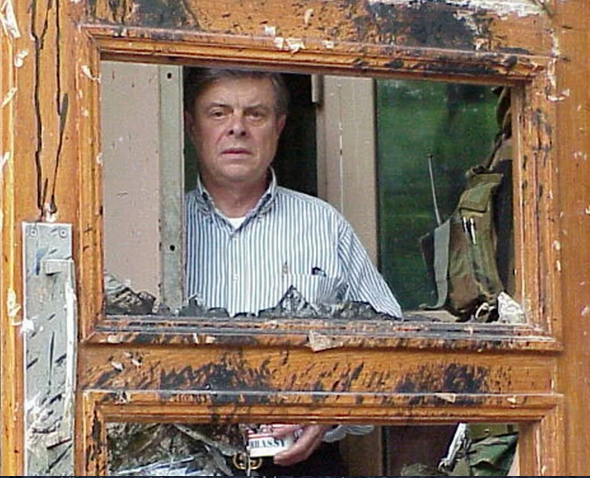 The image of US ambassador Jim Sasser peering out the broken door of the paint-splattered US embassy in Beijing is more than a moving photograph; it provides a mini-course in diplomacy.

The context: an anti-US demonstration whipped up in the angry aftermath to the US stealth bombing of the Chinese embassy in Belgrade on May 7, 1999. The bombing was precise enough to destroy the building and kill three people.

There were those who claimed it was an accident, and others who insisted it was an intentional attack. Not surprisingly, opinion cleaved along national lines. Americans thought it unlikely to have been intentional. Why would a democratic country bomb an embassy? Chinese, and not just officials, thought it was intentional. Hi-tech and deadly, it showed the true colour of US imperialism.

In the hot seat during this maelstrom of national mood swings and incendiary opinion was US ambassador to Beijing, Jim Sasser. The mild-mannered former US senator from Tennessee who was a political appointee. He was no China expert, but a natural diplomat.

The bombing of China’s embassy and the incendiary aftermath that saw the US embassy chancery defaced and battered, but not destroyed, was as close to war as the US and China have come in modern times. Perhaps, in retrospect, not as close as it felt at the time, but it was not uncommon for Americans in Beijing at the time to be lightning rods for populist anger.

When a US embassy photographer snapped a photo of a forlorn-looking ambassador staring at the damaged property, it was composed to good purpose. Although Jim Sasser left Beijing a few months later on a rotation that had been scheduled in advance, during that dire moment of need, he stood up and stood his ground, but he did so in a way that was at once wistful and empathetic.

The Biden administration needs to find an ambassador with such a temperament. Intimate China knowledge is highly desirable, but personality goes a long way in diplomacy and with China and the US at tenterhooks, an even-keeled envoy can help keep the peace.

Tough is not enough. Respected is not as important as respectable.

Secretary of State Anthony Blinken’s first stop on his first Asia tour is Japan. Although the US is rewarding Tokyo for its loyalty (subservience) by treating it as the number one diplomatic destination in Asia, everyone knows, including the Japanese, that China is paramount.

The Japanese media picked up on this decades ago, popularizing the term “Japan passing” because Bill Clinton and other prominent US leaders tended to skip past Japan and land in Beijing.

China has long beckoned for reasons of geopolitics, diplomatic urgency and to some extent for the sheer pomp and circumstance of a massively choreographed Beijing visit, following in the footsteps of Nixon, Carter, Reagan, and Bush senior.

Already an artful accommodation has been reached. Blinken and White House National Security Advisor Jake Sullivan will stop in Anchorage, Alaska on the way home from Japan where they will meet with two high-ranking Chinese diplomats--Politburo member Yang Jiechi and State Councilor Wang Yi.

The new US ambassador has to be able to play subtle diplomatic games of this kind convincingly. That’s why one of the alleged top candidates for the slot, former Chicago mayor and Democratic Party loyalist Rahm Emanuel, would be a disastrous pick.

He has a knack for making enemies; he did so as a Clinton advisor, and again after a brief tenure as Barack Obama’s Chief of Staff. When I spoke to him with colleagues at a private meeting at the Nieman Foundation at Harvard in 1997, he flew off the handle every time he got asked a question he didn’t like.

Good diplomacy is not about showing how tough you are, though toughness, backbone and underlying convictions are important.

When it comes to dealing with Beijing, keeping cool, calm and collected is also paramount.

On the other hand, a jaded diplomat such as R. Nicholas Burns, also considered to be on Biden’s shortlist, lacks the politician’s verve and autonomy of spirit of the sort that served Sasser so well in a time of crisis.

A bureaucrat who has loyally served diverse masters with aplomb, Burn’s career spans the Bill Clinton years, and both Bush Presidencies. He served as ambassador to Greece and as George W. Bush's envoy to NATO, and supported the war in Iraq.  In 2008, he retired from the foreign service to spend more time with his family and lobby for arms manufacturers.

When it comes to dealing with Beijing in real time on the ground, it takes a leader, not a follower. Sure, ambassadors serve at the pleasure of the president, but a good executive appoints qualified candidates and delegates authority to them.

Surely there are many men and women both knowledgeable of China and of good temperament worth considering for the job.

And the position should be filled soon, to better stem the free fall in US-China relations.
on March 12, 2021