TIME FOR A SEASONED US AMBASSADOR TO CHINA

The United States needs a diplomat in Beijing who knows how to read between the lines of "Chinaspeak," not a political appointee. 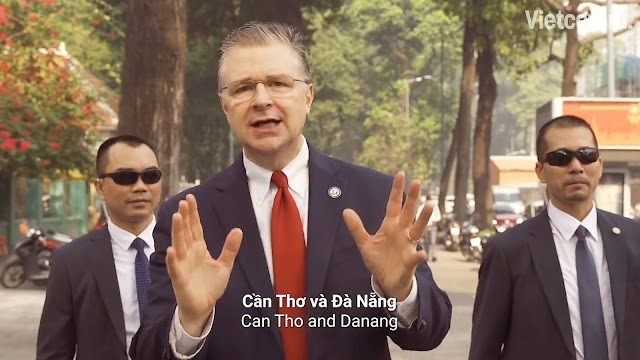 Daniel Kritenbrink, U.S. ambassador to Vietnam, performs in a rap video to mark the traditional Tet holiday on the Lunar New Year. Kritenbrink, a career foreign service officer, is probably more qualified to be a diplomat in China than any of the other names currently being discussed, despite being a Trump era appointee. | U.S. EMBASSY IN HANOI / VIA AFP-JIJI

Who will be the next U.S. ambassador to China? It’s time for U.S. President Joe Biden to stop playing politics and choose someone of a diplomatic temperament who knows China well.

The United States needs a diplomat in Beijing who knows how to read between the lines of “Chinaspeak,” not a political appointee for whom an ambassadorship is sinecure, or a diversity candidate to score points back home. Yes, consideration should be open to all qualified candidates of all backgrounds. But so far, most of the names tipped for this key envoy position have been unqualified, puzzling or outright inappropriate.

In December, the name Pete Buttigieg was kicked around as a possible U.S. ambassador to China, though he quickly settled for a domestic position as transportation secretary instead. Then Disney chairman Bob Iger’s name got batted around. It is not known how serious either candidacy was in Biden’s eye, but by January, there began to be double-barreled speculation about an either-or choice: It would be either scrappy street-fighter Rahm Emmanuel or back-room bureaucratic eminence Nicholas Burns.

Emmanuel and Burns differ in style, one belligerent, the other diffident, but both are hardline hawks with little China experience and a bad history of strongly supporting the insupportable causes due to the irrational drumbeat for action overseas, such as the war in Iraq for example. Rather than narrow the choice down to the Scylla and Charybdis of two hardliners, Biden would be better off sailing away and widening the search to include candidates who are not easily persuaded to go to war.

One name recently put forward is Claire McCaskill, former senator from Missouri who got unseated by right-wing firebrand Josh Hawley. Not a great choice. She co-sponsored an Orwellian bill to criminalize boycotts of Israel, and accused Bernie Sanders of being too extreme. She holds mainstream Democratic Party plank positions on gun control and abortion, but has no diplomatic experience and knows nothing about China.

Daniel Kritenbrink, a career foreign service officer, is probably more qualified to be a diplomat in China than any of the other names currently being discussed in the papers, despite being a Trump era appointee. As U.S. ambassador in Hanoi, Kritenbrink is perhaps best known for a playful rap song he recorded to celebrate the Tet holiday in Vietnam. That shows he’s willing to take chances, culturally speaking, and it’s out of the box but a public relations dunk. He speaks Chinese and has worked as deputy chief of mission in Beijing, so not only could he hit the ground running, but also knows the Beijing social scene.

Chas Freeman, who was present at the dawn of U.S.-China relations as principal interpreter for the Nixon’s 1972 Beijing visit, would be an interesting choice, though he has ruffled feathers for speaking his own mind and at 77 is almost as old as Biden. Few American diplomats can match Freeman’s China chops, and his subsequent scholarship and diplomatic work is solid. Unlike Nicholas Burns and diffident diplomats who follow the flavor of the month approach, Freeman was tough enough to criticize the war in Iraq and elucidate problems concerning the way U.S. policy leaned to Israel.

But Nancy Pelosi, as close to a reigning queen of the Democratic Party as there is, now that Hillary Clinton has become a mystery book writer, has castigated Freeman for being too sympathetic to Beijing, which actually might make for a good ambassador, but is at odds with the belligerent mood of the moment.

China scholar David Shambaugh at George Washington University is a decent candidate wise to the ways of political life in Washington, as is Susan Shirk, of the University of San Diego. The latter is less diplomatic in temperament but has an edge given her stint as Deputy Assistant Secretary of State under Bill Clinton. Being female doesn’t hurt.

China expects a high-profile figure, if only as a matter of face. As former Mexican ambassador Jorge Guajardo recently recalled, “I remember every time I’d approach someone in China they’d say ‘Oh you must be very powerful to be named ambassador to China’.”

But China doesn’t get to decide who the next ambassador is, and an argument can be made for someone not nationally known if they prove to be more supple and apt. The domestic political pressure for the top slot to go to a non-male, non-Caucasian candidate is not helpful, though all qualified comers should be considered.

Advocates for more Asian representation in the Biden administration have complained that his cabinet is the first without any Asian-American secretary in 20 years, but is it really meaningful to hold up hardcore Republican Mitch McConnell’s wife as an emblem of diversity? Elaine Chao was Secretary of Transportation under Donald Trump, and Secretary of Labor under George W. Bush.

It might seem like a shrewd diplomatic move to select a Asian-American for the job, for example, but as Chinese-American Gary Locke’s rocky tenure as U.S. ambassador to Beijing demonstrates, distant kinship, identity-wise, is no guarantee of success.

Perhaps a better example would be Bette Bao Lord, who took up residence on Guanghua Road ambassadorial residence from 1985 to 1989 while her husband Winston Lord served as ambassador. Ms. Lord made quite a splash in the local arts and culture scene, attending film screenings, rock concerts and meeting up with dissidents, grabbing the limelight from her husband.

Lloyd Austin and Ely Ratner at the Pentagon have made their suspicions of China clear, as have Kurt Campbell and Rush Doshi at the National Security Council. With Jake Sullivan as national security adviser and William Burns at the CIA, it’s a slam dunk for the hardcore. The China hawks have it.

If hawkish views, power politics and virtue-signaling about diversity are allowed to guide Biden’s judgement on the China envoy pick, then U.S.-China diplomacy is in for a rough ride, rougher than it has to be. Which is why the search needs to be broadened with a focus on expertise instead of expedience.

At this rocky juncture in U.S.-China relations, the peace of the world may come to depend on Biden policy, which is why it is imperative to select a seasoned diplomat who is principled, has backbone, is deeply knowledgeable and is respected on both sides of the Pacific.