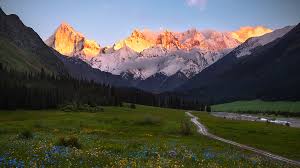 In the West,'China the villain' is a narrative few dare to challenge

Something strange has happened to public discourse in the West, perhaps magnified by the dislocation and despair of the pandemic. People are not just covering their mouths with masks to avoid viral harm; they are covering their mouths so as not to say things that challenge the master narrative of the moment.

The free media is itself complicit in the silencing and outright ridicule of views that don’t comport with the flavour-of-the-month trends coming out of the corridors of power.

Take Xinjiang, for example. The

dominant narrative at the moment is that China is committing genocide in Xinjiang. This is an extremely serious charge – one that harks back to the Holocaust. But is it true?

Is it not worth considering the possibility that the freighted term “genocide” is being bandied about to inflict maximum pain on China, rather than to reflect an honest assessment of the situation on the ground?

Forcing people into work camps is indeed a terrible thing. And sadly, it is something which China has a long record of doing, dating back to the anti-rightist movement of the 1950s and the Cultural Revolution of the 1960s, though in those days it involved mostly members of the Han majority.

Many Han people were treated in the same shabby way that Uygurs have been treated recently – forced to leave home, forced to work in state facilities. It’s shameful, it’s politically tone-deaf and flat-out wrong in moral terms, but is it genocide?

To date, the strongest accusations come from NGOs and researchers who wear the anti-China agenda on their sleeve. Take Human Rights Watch, which recently has accused China of crimes against humanity. Ditto for German researcher Adrian Zenz, who said he was “led by God” to investigate the camps in Xinjiang, using inference and second-hand data to estimate an imprisoned population of 1.5 million.

Their accusations, some quite horrific, are based on zero access and anecdotal information. The incompleteness of their research leaves no choice but to extrapolate. Some of the dots connect, some don’t.

Connect-the-dots was the mantra that the US and Britain used to justify the invasion of Iraq, regime change and slaughter by bombing, ultimately snuffing out the lives of hundreds of thousands of innocents. The spurious charges put forth by the US and Britain had the ring of truth, the imprimatur of respected agencies and elite analysts and, while they didn’t present a slam-dunk case, it was presented as such in the media.

That it turned out to be a crock of lies, half-truths and half-baked speculation was not enough to stop the subsequent war, which proved disastrous.

Now, as then, there are belligerent opinion leaders in Washington who seek war and regime change. Even in China. Yet even a “small, short war” (as was said about Iraq) would have terrible untold consequences. It’s not that the US couldn’t inflict horrendous harm on China, it’s that the US cannot hurt China without hurting itself. War with China is a lose-lose proposition of the highest degree.

It is precisely at such times of escalating threats and rabid nationalism that free speech and dispassionate research are needed, and voices against regime change and war need to be listened to attentively.

Columbia University economist Jeffrey Sachs was recently invited by the BBC to “discuss” with China human rights activist Teng Biao the futility of talking to China about climate change in light of Xinjiang and human rights abuses. He questioned the framing of the interview, wondering why the BBC talked about human rights as if it were an issue that only applied to China and not the US. That got him accused of whataboutism.

“The Xinjiang genocide allegations are unjustified” with genocide legal researcher William Schabas, has taken a courageous stand against the groupthink of the moment.

Another economist, on the other side of the world, got similarly roasted on social media

for having the temerity to speak up for the authors of an article that debunked the popular media story claiming one million Uygur Muslims worked in Chinese concentration camps.

Jane Golley, who researches China at Australia National University, said the scholars chose to remain anonymous for fear of a backlash for challenging the dominant narrative of the day.

China is now defined as the ultimate other, the enemy of our time. Not only have the hate-driven policies of Donald Trump’s China team been absorbed by the new US administration of Joe Biden,but they are doubling down on hot issues such as Xinjiang and Taiwan

Soft-spoken Secretary of State Antony Blinken has taken the place of the truculent Mike Pompeo, but it is hard to distinguish policy differences between the two.

There is only one acceptable American take on “Chy-na” and that is to accuse it of everything, give it credit for nothing and suspect it of the worst.

Philip J. Cunningham is the author of Tiananmen Moon, a first-hand account of the 1989 Beijing student protest