TONE DOWN THE POLITICS TO SAVE THE GAMES 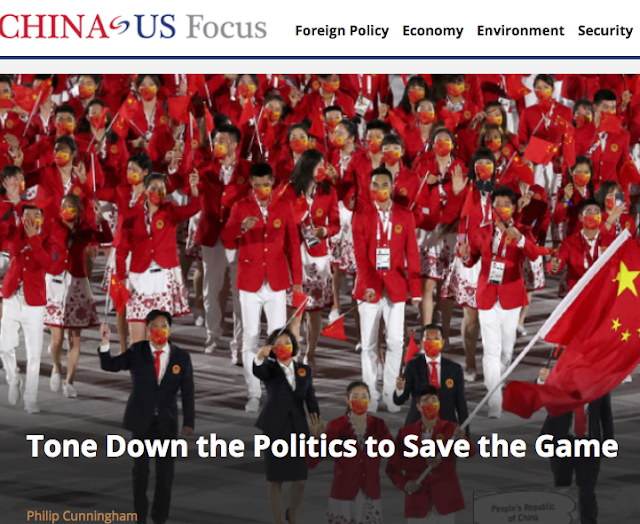 Even as the Covid-diminished Summer Olympics grind to a conclusion in the hot Tokyo summer, the winter Olympics scheduled for Beijing have become a scorching topic. On July 27, 2021 several members of the US congress made an incendiary call for a boycott of the Beijing Winter Olympics.

This poorly-timed act of political grandstanding is an insult to the august Olympic tradition of bringing nations, including rivals, together for a round of peaceful competition.

Due to a pandemic-related postponement, the winter games will follow the summer games in short succession. Only half a year apart, the Tokyo games and Beijing games invite inevitable comparison. Which of the two historic rivals will have the satisfaction of having hosted the more satisfactory of the back-to-back Olympics?

Japan, hobbled by its own sluggish and irresponsible response to the Covid pandemic, had to postpone the Tokyo games for a year before the LDP-led government finally insisted on it, going against popular opinion and the advice of public health professionals.

There may be some latent satisfaction in staging the ill-starred games, since a downsized performance is presumably better than no performance at all, but Covid rates continue their inexorable climb and the stubborn insistence of putting on the games, come what may, has come at the price of barring spectators from almost all venues.

Japanese athletes are performing well, but Japan will lose money on the games. The losses come not just in terms of low ratings and reduced advertising revenue, but in tourism, stimulation of the economy and the ineffable but not trivial matter of generating good will.

The most expensive Olympics ever, with a billion-dollar renovated stadium as its centerpiece, world athletes played to empty stands. it’s a sad spectacle.

China’s response to the pandemic, universally decried in the early months of 2020, now looks in retrospect to have been not only robust but unexpectedly effective. Keeping up the current remarkably low rate of infection is necessary if the winter games are to be held, let alone deemed a success, but Beijing seems on track to reach that objective, barring unforeseen epidemiological developments.

Where Beijing stands to suffer is in the political arena, as a group of righteous, right-wing politicians US are currently leading the charge to boycott the games. The ostensible reason is Beijing’s policy in Tibet, Hong Kong and other integral parts of its own country, but in this season of knee-jerk China bashing, any old reason would do. Simply put, there is a constituency in American politics that has determined China to be a Cold War type enemy that has to be countered at every turn. Nor is it possible to appease or please America’s hardcore hyper-nationalists; in their eyes China can do nothing right and America can do nothing wrong.

Japan, which is normally quick to follow the US lead in global politics, both for reasons of opportunism-as evidenced in the chummy relationship between former Prime Minister Abe and former President Trump, and for reasons of quiet coercion, as evidenced in decades of yielding to a heavy-handed US military presence in Okinawa and other bases around Japan, has prudently been quiet on the topic of the upcoming winter games.

Had Beijing and Tokyo started to engage in a shouting match before the summer games were held, the prospect of tit-for-tat boycotts would have loomed and ruined both games. Instead, Japan took the high ground diplomatically, making team China feel reasonably welcome, and team China, with its hundreds of athletes and dozens of top medal-earners, is surely one of the pillars, economically and athletically, of the Tokyo games.

If, once the summer games are safely in the past tense,  Japan should turn around and threaten to boycott the China games in keeping with the mean-spirited US attempt to do the same, it will be a betrayal of Pearl Harbor proportions.

Presumably Japan will take the high road and participate in the winter games, returning China’s favor of lending credibility to the tainted Tokyo games, but if both the US and Japan should both refrain from participating in the Beijing games, it could very well mark the death knell for the modern Olympics.

It is true that the games, scheduled every four years on a clockwork basis have a knack for intersecting with deplorable political developments. The best known case of pulling off a reasonably successful set of games against frightening political headwinds are the Berlin games of 1936. The Tokyo games of 1940 were cancelled by all-out war. The Soviet games held in Moscow, were boycotted by the US, and the USSR, with 14 aligned Eastern Bloc countries, returned the “favor” in skipping the Los Angeles games four years later. Since then, the games have resumed, with China’s participation growing in every cycle, despite the imperfections of politics.

For the US to single out China and boycott its upcoming Olympics to “hold it to account” is a laughable exercise in hypocrisy. The US would not have looked kindly upon being shunned as an international pariah and “held to account” for its merciless dropping of bombs and aggressive deployment its lethal war machine over the years in places like Vietnam, Cambodia, Laos, Iraq, Libya and Afghanistan, to name a few foreign invasions, and there are deplorable goings-on in the streets of America as well.

Furthermore it’s hard to say what’s really going on in China. Chinese reports reflect access but don’t shed much light, the US offers exposés from a distance, often extrapolated from dubious data. While Chinese propaganda is recognized as pernicious, the US media is increasingly vulnerable to being led by the nose, whether it be pre-programmed and deftly-coordinated information campaigns emanating from the Pentagon, Republican Party hotheads or the buttoned down hypocrites of the current White House. There’s still a free press operating in America, but its adherents are increasingly drowned out the by noise and detritus of a zone flooded with bad information, skillfully honed misinformation, public relations spin and outright lies.

Yet the bossy tenor of US foreign policy, under Biden almost as much as under Trump, continues to insist that the countries it criticizes “do as we say, not as we do.”

Given this toxic information ecosystem, the current rearguard actions of a few odious US lawmakers to boycott the 2022 Beijing Winter Olympics may actually gain enough steam enough to inflict damage if not shut down US participation in the games. Already major US advertisers who have signed on the games (Intel, Coca-Cola, Proctor and Gamble, Visa, Airbnb,) are being harassed for not caving into demands for a total boycott by the likes of US Senator Tom Cotton, an irascible populist and ill-willed opponent of Beijing.

So if the modern Olympics, based on those legendary Greek games so long ago, are to exist, let alone thrive in a world racked with political tensions, war and injustice, the games need a break from heavy-handed political posturing. The games can and should go on, but the politics has to be toned down to allow the magic of bringing people from around the world together in a single venue for good-spirited competition to happen at all.

The responsibility to keep the Olympics cosmopolitan falls most heavily upon the host country, but all participants must be good sports as well. The International Olympic Committee, much-maligned, and perhaps rightly so, for its inflexible rules and arrogant leadership has a role to play as mediator. It is good for the games that Japan’s initial plans to make of the Tokyo Olympics a calculated spectacle of Japanese public relations—Fukushima is fine and we’re on the way to a boisterous recovery—was quietly restraied by the IOC. Likewise, it is to be expected and hoped that China will be a gracious host and treat all athletic delegations, visiting journalists, sports fans and other participants with consummate respect while also keeping the best interests of the Chinese people in mind.

Japan had numerous missteps in getting the tone right. Its grand opening ceremony was greatly curtailed by both necessity and choice. The opening ceremony director was fired due to an abuse scandal, politicos refused to attend an event in an empty stadium, and much-awaited musical galas and manga-themed entertainment were cancelled. But even the pared-down ceremony had its moments.

The eerie and enlightening drone display of our planet, a single dazzling floating world rotating against the blackness of night, is as good an image as can be attached to the international games, and it is in that spirit that the Beijing games should go forward.