KISHIDA: NEW KID ON THE BLOCK IN A TOUGH NEIGHBORHOOD

Japan’s new Prime Minister Kishida Fumio and China’s Xi Jinping talked by telephone for half an hour on October 8, touching on the need for communication and good neighborly policies. Although details of the introductory chat are scant, and much of the time was necessarily taken up by translation back and forth, it is encouraging that both sides are talking so early in the new administration.

In his first public speech as Japan’s prime minister earlier this month, Kishida signaled a practical approach to Sino-Japanese relations. His stated outlook is sensible and hard to find fault with. He views a stable relationship with China as “important not only for the two countries but also for the region and the international community.”

No great insights or initiatives there. It’s Diplomacy 101, but it’s a start.

Kishida, well-known in his career as politician and diplomat for his relatively dovish views, has tacked hard to the right in recent months to shore up support from LDP stalwarts close to former prime minister and self-styled hawk Abe Shinzo. He needed their support from the git-go to have a shot at the top slot, and will meet formidable and unforgiving resistance if he goes too far too fast in repairing relations with Beijing.

Abe and his hardline associates, including his brother Kishi, and former prime minister Aso Taro, have dominated national politics for more than a decade now. The so-called LDP bluebloods have family links not only to the founders of the LDP dynasty in the postwar period, but are also connected to war-time luminaries such Kishi Nobusuke, an indicted war criminal and, against all odds, a post-war prime minister. He was once a powerful member of Tojo’s war cabinet as the Minister of Munitions.

Abe’s Shinzo’s blood brother Kishi Nobuo goes by the surname of his maternal grandfather, rather than the name of his actual father, Abe Shintaro, because he was raised from birth in the otherwise childless family line of uncle Nobukazu in the Kishi household.

Leaving aside the psychological question as to what impact this unusual arrangement may have had on the two ambitious brothers, they share a similar political agenda, one that has been aggressively mapped out and partially implemented by elder brother Shinzo.

Abe Shinzo’s philosophy in a nutshell is that Japan is beautiful, and was beautiful before, even during the war. They like to recast Japan’s disastrous military aggressions as a good fight:

Kamikaze pilots are the ultimate patriots. Pan-Asianism puts Japan on top. Make Asia safe for the Co-Prosperity Sphere. Comfort women are a figment of liberal imagination. Nothing happened in Nanking. Pearl Harbor was not a sneak attack, etc, etc.

Kishida’s problem is that Abe is still trying to call the shots. If the Abe faction gets its way, the new premier will practically be silenced with little room to maneuver, especially when it comes to the ruling party’s political plank.

The Abe faction won’t accept anything less than reflexive anti-communism from its prime minister; never mind that communism isn’t what it used to be and the Cold War is supposed to be over. The Abe faction still drink the either/or Cold War Kool-Aid, which is why they are as provisionally pro-American (despite the bitter history of the Pacific War) as they are hysterically anti-Chinese.

The naturally affable Kishida’s got a tightrope to walk on, but if he can retain his wit and his balance, he can subtly redefine Japan-China relations despite the belligerents in his own party, and a cabinet that includes Kishi Nobuo as Defense Minister and other Abe administration retreads.

So, it’s a tall order to alter the course of any ship of state, but with Kishida at the helm it might be possible to tack a few degrees away from collision and conflict.

It is to be expected that Kishida will continue to pay lip service to the program set in place by party stalwarts, but he has some leeway if he seeks incremental change in a diplomatic way.

One can detect the hardline echo of the Abe faction in Kishida’s inaugural speech, when he made a point of saying that Japan will “speak up against China’s unilateral and coercive activity in the region.” Kishida also caved to the hardliners when he made a ritual offering to Yasukuni Shrine, though he eschewed an in-person visit.

He went on to say that the Japan-U.S. alliance remains the “lynchpin” of diplomatic and security policies and he vowed to further elevate the partnership, because it serves “as the foundation of peace and prosperity in the Indo-Pacific region and the entire world.”

It’s one thing for Japan’s new prime minister to be fond the United States (unlike his more hawkish peers, he’s actually lived there, albeit as a child) but it’s quite another thing to issue Pentagon boilerplate propaganda about how the U.S. is the foundation of peace and prosperity in the “Indo-Pacific” region.

There was no such thing as the “Indo-Pacific” in the political vocabulary until a few years ago because there’s no such region. It’s a concoction, an arbitrary redrawing of lines that attempts to rope India and Japan into an anti-China coalition along with the U.S. and Australia.

The Quad, whose founding fathers include Abe Shinzo and Dick Cheney, is a contrivance to isolate, bully and stigmatize China without quite saying so in as many words.

So, when the new prime minister of Japan talks of peace and prosperity in the “Indo-Pacific” he’s singing praise of a U.S. strategic ploy that was refurbished during the Trump administration, when Abe was his counterpart, Malcolm Turnbull represented Australia, Mike Pompeo was Secretary of State and the ideological conservative Kenneth Juster was U.S. Ambassador to India.

Kishida’s phone call with Xi Jinping also came before his call to India’s Narendra Modi, which subtly suggests that anti-China “Quad” posturing will not be a given in his administration. Xi spoke of the need to be good neighbors and Kishida issued the usual bromides about peace.

It’s a good start, which is not to say it’s terribly promising as much as to say it could be a lot worse. Both sides will have to drop the language of the new Cold War and stop reviving bad memories of the old war, including anti-Japan TV dramas and ritual visits to Yasukuni Shrine, if they are to make any progress in bridging the divide.
on October 26, 2021

US-CHINA: THE IMPASSE IS OVER BUT THE UNDERLYING HUBRIS REMAINS 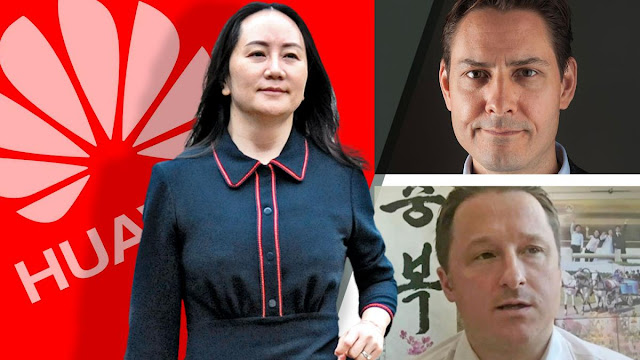 The exuberant homecoming of Meng Wanzhou to China paired with the happy return of Michael Spavor and Michael Kovrig to Canada provided a flag-waving moment for many viewers of the September 25, 2021 news cycle. Whenever the victims of unjust detention are released, it feels like a cause to celebrate, a victory for the individuals involved and a feel-good moment for empathetic observers.

It’s good that the diplomatic impasse has been resolved, but whether justice has been served is an entirely different question. If one steps back from the homecomings and looks at the whole process from beginning to end, both sides have much to answer for, and all parties come out looking bruised.

What might be seen as win-win-win in personal terms can also be seen as lose-lose-lose in terms of national dignity. The exchange of “detainees,” patriotic optics aside, was indelibly tainted because the taking of detainees was tainted in the first place. It doesn’t seem right to construe a swap of unlucky individuals who shouldn’t have been detained in the first place as anyone’s diplomatic victory.

The TV coverage of Canada’s airport welcome of the “two Michaels” was subdued compared to the flower-strewn, red-carpet welcome staged in Shenzhen, but it was high-octane in its own way, personally attended by Prime Minister Justin Trudeau.

Despite the lavish local coverage, Beijing did not see it fit to send a national leader to meet Meng. Shenzhen was a prudent choice of destination city, not only because it is home to Huawei headquarters, but it is also conspicuously distant from Beijing. Which raises the question–why did Canada’s diplomatic corps deem it proper to have the prime minister on the scene in person?

Perhaps Michael Kovrig’s status as a veteran diplomat has something to do with that, and that might explain why the Canadian media scrum to date has poured more attention on Kovrig than his freelance counterpart Michael Spavor, but it doesn’t seem fair.

The two Canadian captives were characterized as spies by some media outlets in China, but this was never well-documented, and could easily be an opportunistic accusation if merely taking photographs in sensitive areas and sharing said information can be construed as second-tier espionage.

The scant amount of official information provided by China to date about their detention does not justify the severity of the charges or the suspicious timing by which they were apprehended on the heels of Meng’s detention.

One likely reason the impasse took so long to resolve was because a face-saving solution eluded low-level negotiators until higher ups on both sides gave word to break the impasse. It takes two to tango, or in this awkward dance, three, since the not-so-hidden hand of U.S. influence permeated the case from day one.

What was Meng Wanzhou if not a hostage to politicized U.S. antipathy to Iran and the long arm of U.S. law? The U.S. insisted that Meng Wanzhou admit wrongdoing as a condition of release, and she complied.

The charges against Meng seem minor, and hardly rise to the level of something a smart administration would arrange to have someone snatched at a foreign airport for, but the Trump administration was not smart.

Biden has, for the most part, been doing the right thing in finding a way out of the mess left behind by his messy predecessor. The optics have been awkward, but the problem has been put in the past tense.

The most spectacular example of Biden getting things done is Afghanistan—the optics of retreat were terrible, and it wasn’t at all well-thought out, and it was stained with tragedy, but the two-trillion dollar U.S. war is over and there’s something to be said for that.

On a much smaller scale, breaking the impasse that froze Sino-Canadian relations and put U.S. imperial overreach in the spotlight, solves a problem, but it doesn’t rise to the level of win-win-win. Meng’s admission of wrongdoing and the alleged confession of the two Michaels were tactical and can be assumed not to be entirely a matter of free will. The real blame does not fall on any of them, but the clash of overzealous systems.

Shouldn’t the U.S., which at the time of the Meng airport-snatching was under the sway of hard-core anti-China ideologues such as Mike Pompeo, Matt Pottinger, and John Bolton, not to mention the fickle Trump, apologize for launching its crusade to destroy Huawei with a high-end judicial hostage-taking of sorts?

Shouldn’t China, in what might most charitably be called poor timing if not poor judgement, clarify why two Canadians were taken hostage immediately afterwards, as if they were not individuals with rights and dignity but mere bargaining chips?