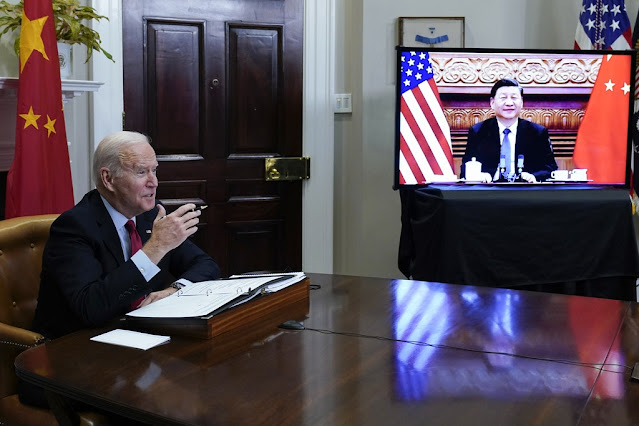 The November 15 virtual summit between Xi Jinping and Joe Biden represents a step forward in a new kind of diplomacy.

In contrast to the recently concluded COP26 global meet in Glasgow, which did not meet the high expectations many held, the success of the virtual talks comes as an encouraging surprise.

Although Glasgow drew an incredible 100-plus heads of state, thousands of experts, and forty thousand delegates—impressive numbers for any summit by any reckoning—not a whole lot was accomplished.

Although activists around the world are understandably eager to engage in-person, the carbon footprint of feeding and housing so many guests, the traffic control of so many motorcades, the fumes of so many idling cars, and the environmental cost of so many jets ferrying delegates back and forth is not trivial. In fact, by appealing to global leaders with the promise of luxurious “first-class” arrangements, the fancy meet has made a mockery of curbing human energy expenditures.

Although Xi Jinping was roundly criticized for not attending the Glasgow summit in person, did the already-jam-packed venue really need a few more jumbo jets and a supporting delegation numbering in the hundreds for a few photo ops?

Face-to-face meetings retain a rightful pride of place in our global political culture, but in recent years at least, summits too often become bloated with massive security bubbles, lavish food and beverage requirements and first class hotel service, the net sum of which is a boon to no one, except perhaps the host city and a few airlines, livery services, hotels and caterers.

And in the case of Biden and Xi in particular, the media trumped-up imperative of having an in-person meet, because that’s how “real” leaders meet, is substantially reduced by the fact that they have met in person already, and many times at that.

With so many urgent problems and so little time, dialing it in is a reasonably effective way of bolstering international cooperation.

"We've spent an awful lot of time talking to one another, and I hope we can have a candid conversation tonight as well," Biden said at the outset of the virtual summit, beaming his message to China with state-of-the-art-equipment, camera work and lighting from the comfort of the Roosevelt Room of the White House.

"Although it's not as good as a face-to-face meeting," Xi said, speaking from the equally comfortable Great Hall of the People, "I'm very happy to see my old friend."

The two leaders spoke for three and a half hours, which was longer than planned, and perhaps longer than either would have been comfortable with in person. They could exchange messages in the relative comfort of their own private offices without having the distractions of jetlag, a huge entourage, hotel arrangements, security bubbles, bodyguards, not to mention the inconvenient demands for social distancing and observation of quarantine rules.

As they spoke, Biden and Xi compared notes on previous travels and made reference to previous in-person meets, touching on the need to keep lines of communication open. They breached numerous topics, ranging from human rights in Xinjiang and Tibet to sensitivities regarding Taiwan, and of course trade issues.

A few concessions were made before the talks even began, with each side agreeing to relax restrictions on the exchange of journalists and media workers.

Joe Biden is a gregarious politician who has spent half a century pressing the flesh, posing for photos, holding babies, doing meets and greets with constituents, and duking it out with colleagues in Congress, so he can be considered a master of the in-person game. As such, he was reportedly skeptical at first about the November 15 virtual summit.

Likewise, Xi Jinping is said to prefer in-person meetings. This is demonstrably the case when the world comes to Beijing. As a leader with a growing personality cult and authoritarian leanings, great benefit accrues to Xi in terms of political symbolism if he can host a well-choreographed brimming with pomp and circumstance on his own terms on his home turf.

In contrast, foreign travel is not as conducive to Xi’s media needs, especially when meetings are held in an over-crowded venue outside China, such as Glasgow. For an image-conscious leader, foreign travel necessarily involves complex security logistics, chance happenings and the inconvenience of unscripted narratives.

So both leaders, each for reasons and inclinations of their own, are not natural candidates for television-link summitry. But they both rose to the occasion this month and hopefully will build on that to keep the conversation going. By staging such a meet, they demonstrated that virtual summitry is of value. In the midst of global disappointment with Glasgow, it was encouraging to see two major leaders willing to adapt to the necessary contingencies of the age. The pandemic has sorely disrupted traditional statecraft, but productive talks and real negotiations can go forward via electronic link in the meantime. This way, the world doesn’t have to wait until everything goes back to “normal” again to address urgent issues at this tender junction in human history. 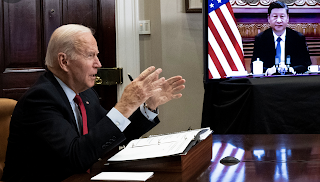