A RUMOR OF WAR AT THE GAMES OF PEACE 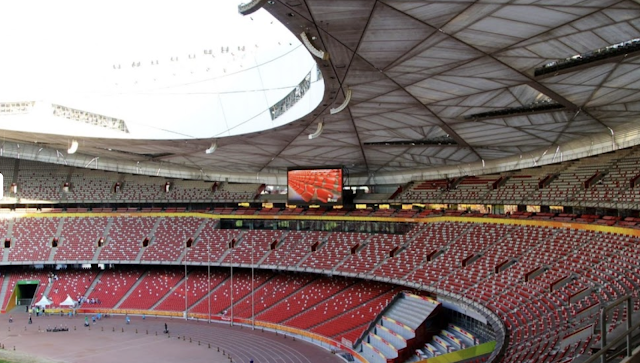 Deja vu: Putin, another Chinese Olympics and rumors of war

The last time Russia’s paramount leader, Vladimir Putin, attended the opening ceremony for the Olympic Games in Beijing, the logistics went smoothly enough and the pageantry was world class, though distressing reports of Moscow’s invasion of Georgia distracted from an otherwise good show.

Fighting had broken out on Aug. 1, 2008, between Russian-backed separatists and Georgian government forces, but Russia’s air force did not commence attacks until the eighth day of the eighth month, just as the Olympics were opening on a date deemed auspicious by the Chinese hosts. A poker-faced Putin sat down in his VIP box in Beijing’s Bird’s Nest Stadium for the lavish opening ceremony choreographed by the legendary filmmaker Zhang Yimou as Russia’s military incursion into Georgia commenced and the first Russian casualties were recorded. Putin reportedly got real-time updates from the front during the festivities and rushed home soon afterward.

On Friday, Putin will again make a symbolic show of face at an Olympic opening ceremony staged in Beijing, and again his large entourage will again be whisked in and out of the Bird’s Nest with state-of-the-art security and disciplined traffic control. His delegation will be accorded all the VIP creature comforts worthy of an honored guest, although the former KGB agent is sufficiently conversant with the stealthy art of poisoning that he reportedly refuses to eat anything prepared outside of Russia.

It’s the tale of two Olympics in one city, two opening ceremonies held 14 years apart in the same stadium, attended by the same Russian strongman.

This time around, the Russian leader’s visit to the Games again brings with it rumors of war and, while his willingness to attend is valued by Beijing for protocol and saving diplomatic face, the timing is not propitious.

The Winter Games, less popular for a world audience than the Summer Games to begin with, have been tainted by diplomatic boycotts and the authoritarian flexing of Beijing. What’s more, ordinary spectators are banned, draconian lockdowns are ongoing and the press corps is diminished due to the burden of political restrictions. Athletes, including those from Russia and Ukraine, will bump elbows inside a small bubble, but paeans to peace and related festivities have been scaled down due to the pandemic.

It’s hard to see how the incredibly shrinking Winter Games will provide the Russian leader with the kind of media cover he found last time around when the whole world had its eyes on Beijing.

Real world tensions are distracting attention from the showmanship of the Olympics, and not the other way around, as was the case during the Russian incursion into Georgia in August 2008.

Putin’s Olympic photo op is an uncomfortable reminder to a world on edge that a catastrophic war with Ukraine still remains in the offing.

As if the pandemic wasn’t worry enough.

China is betting on its remarkably low COVID-19 infection rate and its ability to impose draconian lockdowns and strict quarantine on short notice to achieve what eluded Tokyo; a COVID-19-proof Olympics. The pandemic caused Tokyo to postpone the much-anticipated 2020 Summer Olympics — and when they finally got staged a year later, it was to largely empty venues.

Putin is flying into Beijing at great expense to spend a few hours in a bird’s nest. The eye-catching centerpiece of both Beijing Olympics, the National Stadium, was designed by Ai Weiwei, a provocative artist who has long since fallen foul of the government in his homeland and is currently in exile. Ai’s iconic masterwork remains a centerpiece of Olympic pomp and ceremony. It helped Beijing make a successful second bid without having to commit to building a new stadium.

U.S. President Joe Biden’s half-hearted diplomatic boycott of the Games has not snowballed into a game-ruining race for the exits, and the Bird’s Nest, even half empty, is still a photogenic venue. Given the absence of known COVID-19 cases in Beijing, other than a clamped down handful, it may still be possible for Beijing to extract a public relations victory from the jaws of diplomatic dissent and COVID-19 fears.

But what about war?

U.S. President Biden has stated there is a distinct possibility of Ukraine being invaded by Russia in February, which throws a lot of shade on the optics of Putin’s visit to Beijing.

Is Beijing’s desire to save diplomatic face inadvertently lending credibility to a belligerent on the eve of an attack?

A Russian attack on Ukraine undoes the gains of China’s Belt and Road outreach in Ukraine, which is the leading supplier of corn to China and a natural link between Europe and Asia?

Even if it doesn’t coincide with an invasion this time, Putin’s Beijing junket is not likely to produce the kind of win-win situation China was looking for when it first sent out VIP invitations for the Games.